A lot of colleagues seem to have been under the impression—maybe because of the title combined with the fact that director J.A. Bayona made “The Orphanage”—that this is a straight-up genre film, a conventional monster movie. Boy, were they ever surprised by “A Monster Calls,” which is in fact a metaphorical allegory of childhood, illness, death, and grief. And an often very powerful film.

Based on a novel by Patrick Ness, who also wrote the screenplay (the book itself was initially conceived as an idea by the late writer Siobhan Dowd, who is also credited in the film), “A Monster Calls” brings viewers into the ramshackle British household of young Conor and his unnamed mother. Their residence looks out onto a church and graveyard that seem guarded by a giant yew tree. Conor (Lewis MacDougall), a restless, shy, bullied kid who’s an ardent daydreamer, artist—and inchoate monster-movie lover—dreams one night of the tree breaking apart, and yielding a giant man of wood. Tree-men and like figures have deep roots (sorry) in Anglo mythology, but the monster who invades Conor’s dreams—whose insides are animated by terrifying, never-ebbing flames—belongs to Conor alone. Speaking in intimidating intonations supplied by Liam Neeson, the monster informs Conor that he is going to appear to him to tell him three stories. And once the monster’s stories are done, he will command of Conor the kid’s own story, and an ultimate attendant truth that only Conor can articulate.

This situation would seem challenging under the best of circumstances. Of course, the movie understands that the situation wouldn’t arise at all under the best of circumstances. Conor’s mother, a young woman herself, played by Felicity Jones, is direly ill, and has been for some time. She’s a one-time artist who put aside her dreams once Conor was born. The boy’s father, Toby Kebbell, has a whole other life in Los Angeles now. Conor’s grandmother (Sigourney Weaver) is a stern intimidating figure who on the outset seems entirely disagreeable. We don’t know it at first, but we suspect it: all the adults in Conor’s family, however well-intentioned, are lying to him. His visits from his tree frenemy help him to reckon with that, albeit in an unconventional way.

When the monster calls, his tendrils wrap around the furniture in Conor’s bedroom, and these tendrils themselves seem to grip the boy as the monster tells fables of kings and queens that end in frustrating paradox, confusing Conor. The boy and his beloved mom have moments of respite, enjoying a 16mm print of the 1933 “King Kong” together, with Mom telling Conor it was a favorite of his late grandfather, who was the only person who could get Grandma to lighten up. These casually dropped bits of history become crucial as the film digs deeper and deeper into the realities of Conor’s situation and the parables of the fantastic figure who helps him deal with that situation, despite Conor’s furious opposition.

This is a very unusual picture, whether you’re viewing as an adult or a teen, but it’s not unprecedented. It has some genuine affinities with the underrated 1986 “Labyrinth,” in which Jennifer Connelly confronted a looming transition from girlhood to womanhood via a fantasy realm ruled by an elfin David Bowie. In that film, as in this one, a close examination of the characters’ family photos yields useful clues as to what’s “really” going on. But “A Monster Calls” is putting its young protagonist through a much tougher transition process, and as such the visions, and the challenges, are more wrenching and terrifying.

While the giant tree monster—in many scenes an actual animatronic creation, in the “Kong” tradition—is a formidable, fantastic effect, and the design and animation of his tales is first-rate, there are portions of the movie that are frenetically over-directed. Bayona’s a formidable talent, and he’s not out to discombobulate his audience in the manner of Michael Bay, but there are times when he’s trying to do too much at once. The story also has some speed bumps. Too many movies nowadays depicting bullying among young people fall back on a very lazy audience-pleasing trick. That is, to have the victim get so mad he’s just not going to take it anymore, and he gives the bully a good walloping. Never mind that this isn’t how it works in real life, but the scene doesn’t actually line up with the idea the tree monster wants to impart to Conor. That the buildup to the confrontation partakes in some peculiar possible gay-panic tension doesn’t so much provide thematic enrichment as it does muddy the waters. (The aftermath of the incident does, however, give Bayona the opportunity to feature the great Geraldine Chaplin in a cameo role, so that’s welcome.)

But once “A Monster Calls” settles in for its wrenching climax, and the revelation of Conor’s “truth,” it becomes both heart-squeezing and philosophically provocative. That the movie is beautiful to look at is a given, if you know Bayona’s prior films, but sometimes it gets you in that department when you’re least expecting it. A conversation between Conor and his grandmother during a rainy drive to the hospital, when the car is stopped for a passing train, is framed in beautiful autumnal running colors outside their car windows (the director of photography is Óscar Faura, who has worked with Bayona on all his features); it’s not only visually breathtaking but emotionally consonant and resonant. Despite its shortcomings, there are things about this film that are hard to shake; the movie’s ultimate wisdom and overarching compassion make it very likely that you won’t want to shake them, after all. 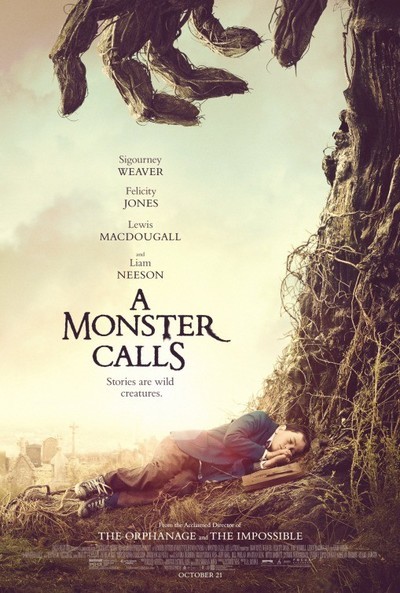 Rated PG-13 for thematic content and some scary images.

Liam Neeson as The Monster

Geraldine Chaplin as The Head Teacher

Writer (based upon the novel written by)

Writer (from an original idea by)