Boom for Real: The Late Teenage Years of Jean-Michel Basquiat

The title of Sara Driver’s documentary, “Boom for Real: The Late Teenage Years of Jean-Michel Basquiat,” is misleading at best. It suggests a character portrait focusing on a specific chapter in the life of its titular icon, yet never quite delivers on that promise. Basquiat, the enigmatic street artist whose work achieved enormous popularity in the 1980s, hovers along the periphery of Driver’s narrative. He is not the center of attention, as he often desired to be in life. Whereas Frank Oz’s great film, “Muppet Guys Talking,” explored the community of entertainers that was built by Jim Henson, Driver’s picture is really about the New York art scene that Basquiat sprung from. A more accurate title for “Boom for Real” would’ve been “Graffiti Guys Talking,” since that is what the film primarily consists of, along with a vividly etched mural of archival footage. When it comes to conjuring a sense of place, Driver’s film succeeds spectacularly, though it comes up short in other areas.

Watching “Boom for Real” without any prior knowledge of Basquiat or his acquaintances featured onscreen would prove to be as futile an exercise as watching “Avengers: Infinity War” without having seen any of the previous entries in the Marvel Cinematic Universe. The film moves at a breakneck pace, cramming as much name-dropping and anecdotes into a slim 78 minutes without pausing long enough to let us savor the nuance and detail of the art it is honoring. There is a frustrating whiff of impatience in the pacing, as if the filmmakers were concerned that viewers would start looking at their phones if a shot was held on for too long. Insights about Basquiat’s bracingly fresh voice are frequently reduced to soundbites. Friends and collaborators note how he understood the nature of public spaces, how he let his art drip rather than tidy it up and how he consumed the things that moved him, acting as a sort of filter for modern culture. What’s missing here is any analysis of the distinctive traits that made him a genius and caused one of his untitled paintings to be sold last March for $110.5 million. Consider his approach to tackling issues of systemic oppression in masterworks like 1981’s Irony of Negro Policeman, a painting that serves as an indictment of African-Americans who have chosen to be complicit in enforcing the rules of a white society. We hear of his band, Gray, but don’t learn that it was named after the copy of Gray’s Anatomy that had a profound effect on him in his formative years, inspiring his preoccupation with body parts. Even the film’s title, “boom for real,” isn’t adequately explained (apparently it was a phrase used by Basquiat to express excitement).

As soon as one accepts that Driver’s film isn’t meant to be a standalone work but rather a companion piece to more rigorous pictures, such as Julian Schnabel’s 1996 biopic, “Basquiat,” the documentary proves to have its own considerable appeal. The most memorable artworks on display in the film reside not in the antiseptic confines of museum galleries, but on city streets and brick walls. Glimpsed on the floor of a subway car is a brightly colored message to boarding passengers that reads, “Welcome to the show,” guiding them into an interior space awash in a riot of color. Driver begins her film with an audio clip of President Gerald Ford decrying urban decay while refusing to allow for a federal bailout of New York City. On the Lower East Side, circa 1978, a wrecking ball swings like a pendulum, as landlords consider burning down near-vacated apartments in order to collect insurance money. Out of this abject impoverishment arose a DIY movement pulsating with anti-establishment fervor, not all that far removed from the one started decades later by young filmmakers empowered by digital cameras. The unofficial mascot of this movement was the uncredited artist responsible for poetic graffiti tagged with the name, “SAMO” (standing for “Same Old Shit”). It was later revealed that the messages were written by Basquiat and his former partner, Al Diaz, in order to criticize aspiring bohemians of the predominantly white art world. While well-off artists in their twenties were still living off of their parents money, Basquiat was living off of people’s couches after dropping out of high school. Numerous links could be made between the nihilism of the “No Future” generation and the dystopian fantasies of today’s youth, many of whom have grown up making a living as online entrepreneurs. There’s no question Basquiat would’ve flourished in our current era of personal branding and celebrities defined by tweets (few people could’ve packed more meaning into 280 or less characters).

A lot of the best stories shared in Driver’s film barely involve Basquiat at all. The artist appears only in photographs and wordless footage that tends to repeat, some of which is taken directly from “Downtown ’81,” a 1981 indie musical comedy written by the late Glenn O’Brien, to whom the documentary is dedicated. Basquiat starred in the picture, though his voice was dubbed by Saul Williams after the original soundtrack was destroyed, a misfortune that undoubtedly led Driver to avoid using any audio. Her most inventive sequence visualizes an elaborate set built out of “scaffolding, lumber and garbage” by Basquiat’s bandmates for their performance at the Mudd Club. Driver recreates it with a miniature animated model comprised of suitably scrappy elements—bottle caps, rulers, spiral bonding—as the bandmates recall Basquiat’s staggeringly intuitive method for upstaging them, yet again. The problem with “Boom for Real” is that it tackles more subjects than it can effectively digest. An entire feature could easily be made about Colab, the NYC artists’ group whose 1980 illegal occupation exhibition dubbed “The Real Estate Show”—which we briefly see here—was designed to accentuate the irony of vacated buildings juxtaposed with escalating homelessness (it was shut down by police a day after its debut). Out of all the talking heads assembled for this film, the most compelling words are shared by Puerto Rican graffiti artist Lee Quiñones, who likens the impact of WWI on Italian futurists with the way in which the high murder rate in the Bronx left an indelible mark on his generation of street artists. He recalls finding sanctuary in the subway yards, where he could hear gunshots just outside of its parameters. His realization that a life was ending not far from where he was painting fueled the urgency of his work. It is hinted that Basquiat may have been motivated by a deeper urgency, as if he were aware of his impending death at age 27 of a heroin overdose.

Driver’s personal connection to the community she’s celebrating simultaneously serves as her film’s chief strength and limitation. She and her longtime partner, Jim Jarmusch, were key figures in the same art scene, and though she interviews him about his random encounters with Basquiat, none of them are very revealing. Just as Schnabel included some of his own paintings in “Basquiat,” Driver incorporates a shot from her brilliant directorial debut, “You Are Not I,” in “Boom for Real”—a haunting image of dead bodies covered in sheets, which she uses to punctuate a montage about the drug abuse that befell countless artists. If only Driver had taken a more surrealistic approach to this documentary, especially considering how the suggestive dichotomies in Basquiat’s work are also present in “You Are Not I,” albeit in a more schizophrenic sense. The film premiered not long after Basquiat’s career launched into the stratosphere at the 1981 New York/New Wave show, and it deserves to be sought out by all serious cinephiles. Driver is a fascinating and crucial artist in her own right, and I’d love to see her make more movies. If this affectionate tribute to her cherished city serves as the impetus to get her back in the director’s chair for the first time in a quarter century, then it has served its purpose. Fans of Basquiat, Driver and her many, many interview subjects will eat it up. Everyone else will feel compelled on more than one occasion to check their phones. 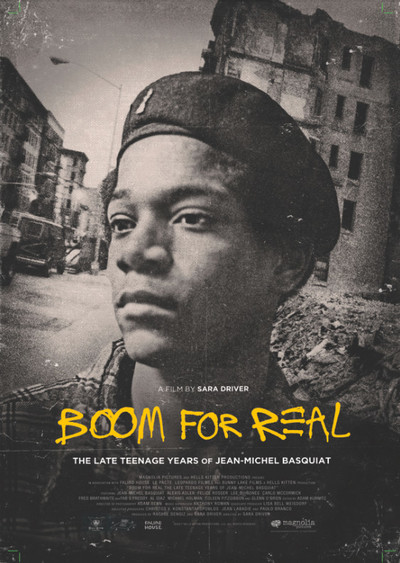 Boom for Real: The Late Teenage Years of Jean-Michel Basquiat (2018)