The body politic, wounded in action

"I called Uncle Sam on Sept. 13, when I saw the president standing on top of the rubble in New York, saying that we were going to get those responsible, which I wanted to do. After a short time at Ft. Hood, Texas, it became clear that we in fact were going instead to Iraq."

-- Tomas Young, Kansas City, Mo., of the Iraq Veterans Against the War

On April 4, 2004, his fifth day in Iraq, 23-year-old Army soldier Tomas Young was sent on what he describes as a poorly planned mission in an uncovered, unarmored five-ton truck. He was hit by two rounds from an AK-47, which severed his spinal cord and paralyzed him. The title "Body of War" refers not just to Young's body, but the U.S. Congress, which abdicated its constitutional duties by putting him in harm's way without exercising due diligence.

The documentary begins with an image of the Capitol dome, and a famous quote from former president and constitutional architect James Madison: "In no part of the Constitution is more wisdom to be found, than in the clause which confides the question of war or peace to the legislature, and not to the executive department."

Young offers another hard-earned shard of wisdom when he says his own life stands as a warning against making "impetuous decisions." He's speaking of the "War on Terror" propaganda to which he and his country succumbed after 9/11, and of the rush to war that was rubber-stamped by the 77 U.S. senators and 296 U.S. representatives who voted to approve House Joint Resolution 114, to "authorize the use of United States Armed Forces against Iraq."

"Body of War," written and directed by TV personality Phil Donahue and Ellen Spiro, uses the structure of a roll-call ballot to hold each lawmaker accountable for his or her vote on what the filmmakers present as a dark day for American democracy. It juxtaposes the difficult post-service life of Young, a T-4 quadriplegic and Purple Heart honoree, with excerpts from speeches by President Bush and by elected officials on the floor of the Senate in October, 2002. They are equally painful to watch.

On some level, however abhorrent it may seem, we can understand that a soldier could be brutally injured in combat by automatic gunfire, because that itself is the essence of war. How, though, do we comprehend the reasoning of those who put him in that situation? Where were the members of the legislative branch who, before ceding war powers to the executive, asked the most obvious question: If the evidence for war is so convincing and so certain, then where is it?

We now know, and Tomas Young knows, that the evidence was never what it was made out to be. No "proof" of Weapons of Mass Destruction. No link between Iraq and 9/11. No plan for the "liberation of the Iraqi people." No reason to expect an invasion of Iraq would stabilize the Middle East. (Quite the contrary.) How could we have been so wrong?

Young is passionately concerned with these systematic governmental failures, but closer to home, he also lives with physical and emotional issues most of us can barely imagine. We see how tough it is for him to get to speaking engagements and anti-war protests, fighting constant pain from his injuries and the side effects of his medications. And we see his wit and eloquence when he does speak.

When the movie fails, it is because of unnecessary highlighting by the filmmakers, usually in the form of overblown music, whether sanctimonious folk songs by the ubiquitous Eddie Vedder, or stirring strings to underscore the roll call of the "Immortal 23." And whose idea was it to play a solo acoustic "Kumbaya" underneath footage of soldiers shipping out for Iraq? That's a cinematic crime worthy of court-martial.

The history of the United States and its place in the world since the attacks of Sept. 11, 2001, is only now starting to be written and understood -- in large part through documentaries like "Body of War," "Taxi to the Dark Side," "Standard Operating Procedure" and many others. "Body of War" again demonstrates that we Americans still have some bitter truths to face. Not only was 9/11 a day that will live in infamy, but our mistakes nearly every day since then have perpetuated and compounded the darkness. 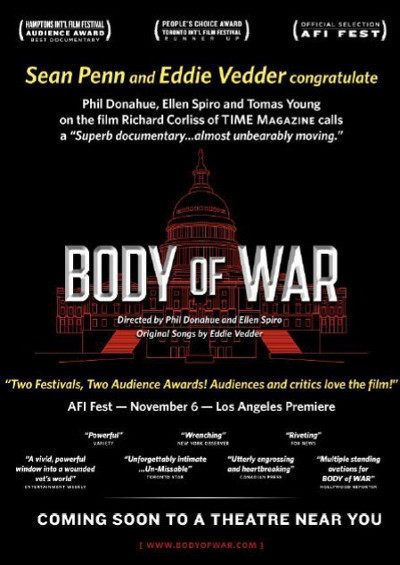