"Blue Caprice" gives serial killers the Sundance-style artfilm treatment. Directed and cowritten by Alexandre Moors, this is a muted thriller, loosely based on the so-called Beltway snipers who terrorized the Washington, D.C. area and parts of Virginia in 2002, killing ten people and wounding three.

Although they were often described as mass murderers—and factually speaking, they were—their sustained, long-form viciousness marked them as serial killers, perhaps. The shooters even left Tarot cards at certain crime scenes with messages like  "For you mr. Police" and "Code: 'Call me God'" and "Do not release to the press." That they worked as a team and were African-American flew in the face of the stereotype of the twisted Caucasian loner operating out of his mom's basement. For a long time, authorities and the media assumed they were looking for one person—probably a disgruntled white man with military experience, like a stereotypical sniper out of a 1970s thriller or TV cop show.

The details of the killers' relationship didn't emerge until a while after the arrest. The outline was fascinating: a sick parody of a father-son bond. The elder of the two, John Allen Muhammad (played here by Isiah Washington), was an ex-convict with a paranoid streak. He was obsessed with killing his estranged wife Mildred, who had a restraining order against him, and wouldn't let him near their children. The younger man, Lee Boyd Malvo (Tequan Richmond), met Muhammad in Antigua, and eventually became a surrogate son to him.

Supposedly Muhammad's real motive for the shootings was to provide elaborate cover for murdering his wife, who in theory would have been written off as another of the mysterious sniper's targets rather than a victim of domestic violence. Malvo initially took credit for being the triggerman in every killing in order to protect Muhammad; he figured that, as a minor, he was unlikely to be put to death. Mixed with these tangled personal motives was Muhammad's elaborate "The Matrix"-style fantasies of humankind toiling under the yoke of evil machinelike overlords, plus vague future plans to kill a cop, bomb more police at the victim's funeral, extort money from the U.S. government, and train fatherless youth to fight The System.

Most or all of these details are alluded to in "Blue Caprice," which is named for the 1990 sedan the snipers drove, but the filmmakers almost never dig into them. This is frustrating. One can understand an artist's wish to make something other than a straightforward docudrama (such as the 2003 TV quickie "DC Sniper: 23 Days of Fear") or yet another documentary on the case (the best is Barbara Kopple's 2008 movie "The D.C. Sniper's Wife," which sees events through Mildred Muhammad's eyes). "Blue Caprice" wants to make a larger or more general statement. It seems to be trying to envision Muhammad and Malvo as social types—like 21st century nonwhite versions of Travis Bickle from "Taxi Driver," or Samuel Byck, whose attempts to kill a sitting president were retold in "The Assassination of Richard Nixon."

That's a worthy goal, but it's pursued in a frustratingly vague way. The movie puts attractively silhouetted and partially-focused shots, jump-cuts, moody synthesizer music, long closeups of poker faces, and other artfilm signifiers where specific information might otherwise go. It's fine to mostly avoid the racial aspects of the case as well as some of its odder particulars, such as the question of whether the duo had terrorist sympathies, or actual terrorist ties, or if they were just draping themselves in Al Qaeda-style ideology because it was in the air at the time.

But I do think that when you base a story on life while removing or altering a lot of key details, you should fill the voids with images and ideas that are just as fascinating. "Blue Caprice" doesn't do that. Granted, it's fiction, so it's under no obligation to educate or enlighten us, but we should at least get a sense that it understands the people and story it's transforming into fiction, and that it has something to say. There are times where it's hard to say if the film is erring on the side of subtlety or just playing it artfilm-cool, so that you can't accuse it of failing to do things that it is, in fact, trying to do, and failing.

The end product is a psychological thriller that's light on thrills and psychology. Two gifted lead actors—plus a charismatic supporting cast, including Tim Blake Nelson as a gun nut who arms the duo, and Joey Lauren Adams as his flaky wife—are asked to do a lot of heavy lifting that the film itself avoids, and do it in such a way that it doesn't play like heavy lifting. They rise to the occasion, but I'm not sure they should have had to.

Washington is frequently dazzling as Muhammad. He gives the man a warrior's coiled energy and falcon's stare (even though Muhammad was in the Army's motor pool and was never in combat), and anchors his "Matrix" fantasies and political rants to a core of recognizable outrage. His characterization has a clear thesis that "Blue Caprice" lacks: Muhammad is a hot-tempered man who hates women and can't get along with one woman in particular, his wife, which in turn means that the only thing that gives his life pleasure, his children, will remain forever beyond his reach. The obscurities that swirl around the man are supposed to add resonance and mystery—maybe?—but they don't have  the impact of this one clean, simple idea.

As Malvo, Richmond gives a blank slate performance of nearly heroic control, but to what end? By treating the the younger man as a dramatic lump of clay, the film ensures we can't truly connect with him unless he's suffering intense physical or emotional pain, and reacting as an animal might. There are a few such scenes in the film, including a sequence in which Muhammad "punishes" Malvo by tying him to a tree in a forest and leaving him there. Malvo's tearful cries—"Dad!" "Daaaaaaad!"—are more powerful than any of the film's glancingly staged killings or 1960s European art film touches. This is an intelligent and ambitious feature, but if Netflix had an "overthinking" it section, "Blue Caprice" would definitely qualify. 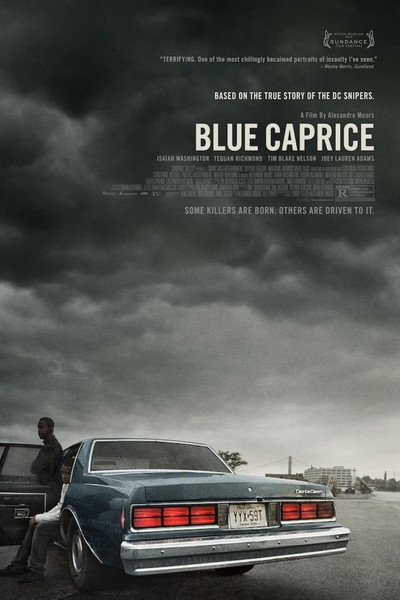