Is anybody else seeing this? The simulation theory is in during these early weeks of 2021, a curiouser and curiouser trend that includes the TV hell of "Wandavision" and a documentary that theorizes about how we might be living in a simulation, “A Glitch in the Matrix” (which also comes out today, and which I also reviewed). Maybe the universe is signaling something to us (or to me, at least) with third sim-film “Bliss,” but I couldn’t tell you what it's trying to say through writer/director Mike Cahill, because this sci-fi movie is so schmaltzy and also pointlessly confusing. What is real and what is not within the whimsy of "Bliss"? Who cares?

Owen Wilson is known for a sense of whimsy in his acting—it’s no coincidence that “wow!” became his unofficial catchphrase—but he plays something more cloudy and pained at the beginning of “Bliss,” sitting in an office. He can only dream of such a feeling of awe, drawing pictures of a lakeside villa that he sees in his head, all while sitting at his desk for a company called Technical Difficulties. A ruthlessly desaturated color palette emphasizes how bad things are, and then Cahill's script makes things worse for Greg—a shocking moment in which he accidentally kills his boss by knocking his head into a table. Not one to just leave a body just lying there, Greg props the body up to a window, behind a curtain, and escapes to a nearby bar.

Inside, Greg is forcefully interacted with by a woman named Isabel (Salma Hayek) who exclaims "You're real!" to him, and slowly plants this idea that she has powers. When she waves her hand, she can knock a tray out of a waiter's hand many feet away. The trick is in some inhaling some yellow crystals, and the fact that, according to Isabel, many people at the bar are not "real." But Greg is only totally convinced of her abilities (stay with me here) when she engineers it so that the boss' death looks like a suicide, as the corpse suddenly pops out the window and crashes many stories below. Isabel convinces Greg to hide out with her at her place—a makeshift apartment under the freeway—and uses the time to show Greg that he too can blow things over using his finger.

The two bound through the city with almost quirky indie comedy abandon, like a bunch of super-powered gutter-punks. They go to a roller rink and blow people to the ground with their magical finger guns, while solemn and sexy music plays, all the better for images of when they knock skates in the bathroom. But there’s an emotional anchor to Greg's newfound err, bliss—Greg’s daughter Emily (Nesta Cooper) is trying to find him, deeply concerned that her father has gone missing. When she runs into him next, two weeks have suddenly passed and he's on a row that's populated by drug dealers. "Bliss" treats this like a grand metaphor is in process, and instead of bringing the viewer closer, it does the opposite. Cahill's film ends up using homelessness and addiction as a hackneyed metaphor, rendering much of its ideas about "finding bliss" into gibberish.

A tedious 50 minutes into the movie (and as shown in the more exciting trailer), “Bliss” transports Isabel and Greg, via the inhalation of special blue crystals, to a different, more colorful, and sunnier existence. They wake up in a scientific space that's like a resort lobby, and are hooked up to a giant box of floating brains called The Brain Box. This is the real world, Isabel tells him, and this is a machine she invented to get cynical people to appreciate how bad things can be. Greg doesn’t remember going into this simulation, so he doesn’t remember the history of this place, or that he's actually married to Isabel, but he recognizes the location: it’s the beautiful lakeside paradise from his drawings. He almost doesn't want to leave until he starts to see a silhouette of Emily, looking for her dad.

“Bliss” is far more kooky and tedious than it is good, and it's so confusing that even the movie's sense of humor is a question mark. At least we have the chemistry between Wilson and Hayek, who can render Cahill's more baffling ideas of romance—knocking a bunch of people down at the roller rink—as movie-star indulgence instead of plainly odd. They’re both inspired casting choices, like how Wilson is more low-key and raggedy than normal, doing the most he can to fill a sorely needed backstory for poor ol' Greg. And Hayek is even more game, leaning into Isabel’s pushiness with spontaneity and flair in the cloudier world, and positing her as a beacon of brilliance in the brighter one. Both of them are pushing themselves with this project, and to their credit neither of them are overshadowed by inexplicable cameos from Bill Nye the Science Guy and Slavoj Žižek the Philosophy Guy.

Cahill is one of the more bleeding-heart sci-fi writer/directors in the business, after "Another Earth" and "I Origins." He doesn’t deal in twists but hopes of expanding perspective and connection—concepts that that are only slightly realized here, his most overwrought film. Some visual ideas work in "Bliss," like when objects from opposite worlds start to overlap with flashing cuts, or the holographic people side-by-side with flesh-and-blood in the brighter world. The non-homeless world is also given a beautiful touch with a light filter that DP Markus Förderer invented for the movie, which turns white light into streaks of color. But instead of focusing on this world, or using more of these concepts, "Bliss" mostly gives us the trite ugliness of Greg's main existence.

For all that Cahill has written, and the intention that he's brought as director, "Bliss" simply does not bring everything together, or achieve its desired high-concept grandiosity. With far too little going on, Cahill then tries to break one’s notion of what’s “real,” and ask the viewer to decide which is the simulation. Hanging emotions on that type of coy plotting doesn’t work, mostly because we’re too busy asking more of the questions—like, “Again, what the hell is going on?” It becomes increasingly difficult to be emotionally present within the simulation of “Bliss,” especially as it demands so much untangling. 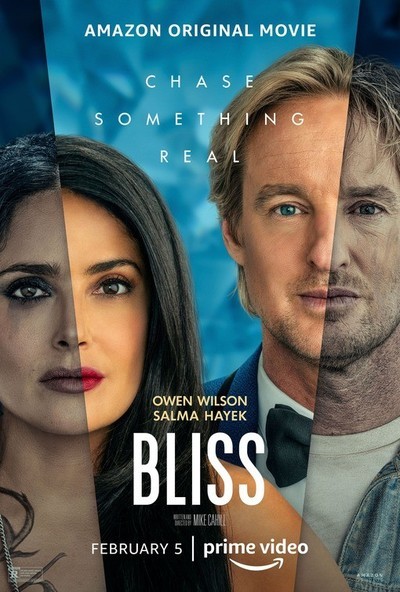