“If scientific analysis were conclusively to demonstrate certain claims in Buddhism to be false, then we must accept the findings of science and abandon those claims.”—Dalai Lama XIV

The conflict between science and religion, fact and faith has been a starting point for great fiction for centuries. Mike Cahill, the writer/director of “Another Earth” and “I Origins,” is fascinated with where these seemingly diametrically opposed viewpoints conflict or, more interestingly, intersect. Can we be scientific and faithful? Can we believe in forces beyond our control even as we live in a world increasingly fascinated with explaining how everything works? With “I Origins,” Cahill takes this internal conflict common in so many people and pegs something of a Puzzle Movie on to it as one science-minded man experiences that which he cannot explain with traditional reason. It is a film that can sometimes frustrate in its supporting characters but Cahill and his talented cast are unapologetically willing to explore the kind of complex intangibles that filmmakers often ignore or merely turn into pretentious drivel.

Dr. Ian Grey (Michael Pitt) is obsessed with the human eye, one of the elements of biology that makes us unique and that religions around the world have used as proof of the Divine Creator. We all have eye biometrics that are specific to us, and various cultures have viewed the eye as a window to the soul or even the thumbprint of a creator. Grey wants to get to the bottom of the evolution of the eye, working with colleagues Kenny (Steven Yeun) and Karen (Brit Marling). Then he meets a model whose eyes essentially take him emotional prisoner.

At a party, Ian has a sexy encounter with a mostly masked woman named Sofi (Astrid Bergès-Frisbey) and can’t stop thinking about her. He finds himself pushed by fate or destiny to a billboard of her unforgettable eyes, eventually tracking Sofi down and beginning a passionate romance with the woman who will change his life. While the preview for “I Origins” gives away almost the entire film, we’ll stop the plot synopsis here—it’s better if you don’t know much—but Ian’s relationship with Sofi sends him down a very different path than the scientific one on which he began. “I Origins” is a film about how destiny and love can lead us to different revelations than we could have possibly reached without them. Anyone who has known love can attest to its ability to forever alter a charted course and Cahill’s emotionally raw approach to filmmaking gets to the truth of that in a memorable way.

It’s also a remarkably confident film technically. Cinema has had a love affair with the eye for a century now and Cahill and cinematographer Markus Förderer take the timeless image of the eye and give it emotional resonance in the way they use it, balancing the film's two equally important halves. Cahill and his technical team wisely ground their film, only occasionally allowing it flights of visual fancy. We spend more time with Ian and Karen in a lab than we do in existential pursuit of a greater purpose. And that makes the film’s more extremely philosophical themes forgivable. Cahill's work here is a notable technical advancement over "Another Earth," proving he's not just a filmmaker with big ideas but one who can pull them off with visual confidence as well. There's a flow in the cinematography and editing that carries us along, only occasionally becoming untethered to a pretentious degree. Cahill’s smartest move was to not allow his film’s “big issues” to overwhelm the human story at its core. And he’s helped notably by yet-another strong performance from Michael Pitt, an actor who has shown such range just recently from his terrifying work on TV's “Hannibal” to this relatable, likable performance.

The film's biggest problem is that the two women in Ian’s life aren’t as well-drawn as they could have been in a superior film. Sofi and Karen feel a bit too much like obvious opposites—the "spiritual model" and the "scientific technician." If both characters were allowed a bit more of their alternate, “I Origins” would have been a more interesting venture. For, in the end, it’s a film that argues we don’t live in a world of science OR faith but one in which both will give us a deeper understanding of who we are and where we’re going. 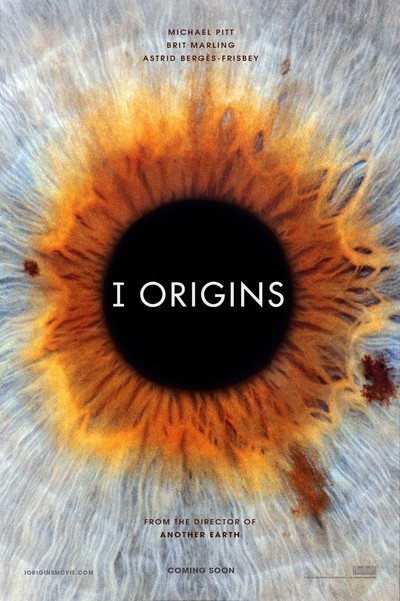 Rated R for some sexuality/nudity, and language