For better and for worse, “Bliss” truly makes you feel as if you, too, are suffering from a narcotic-induced, hallucinatory freak-out—one that leaves you physically exhausted, mentally spent and ultimately wondering what the hell just happened to you.

In that regard, writer-director Joe Begos’ film is sort of effective. It drags you, vividly and thoroughly, into its increasingly dark and depraved world—whether you want to be there or not. This kind of movie can be a twisted thrill: stylish nightmares like Panos Cosmatos’ “Mandy” and Gaspar Noe’s “Climax,” the latter of which “Bliss” resembles a great deal. But there’s a relentless shrillness at work here that makes the movie more grating than exciting. And the figure at the center, Dora Madison’s Dezzy, is so singularly surly that it’s hard to care whether she makes sense of her extended drug trip or even comes out the other end of it intact.

Dezzy is supposedly a brilliant artist who’s having trouble coming up with her next great painting. She paces around her downtown Los Angeles loft, smoking and struggling and dodging her landlord, who skulks about demanding the rent she owes. Driving around town in her vintage Cadillac convertible, her wild, auburn curls blowing in the breeze and an ever-present blunt dangling from her lips, she makes a series of phone calls and visits in hopes of keeping her life together. This early section of the film—in the daytime, before Dezzy begins maniacally snorting a designer black powder known as Diablo—is actually the most compelling part. Begos shot on 16mm, which gives the film a grungy, low-budget aesthetic and a scrappy, forward momentum. The tension is palpable with Dezzy behind the wheel, planning her next move and increasingly panicking.

But among the stops she makes is to her drug dealer (Graham Skipper), who offers her something extra special to get her creative juices flowing again. He warns her that it’s heavy-duty stuff—“That shit can be bonkers,” he says of the mystery substance wrapped in plastic—but she vacuums it up nonetheless. And once she does, it changes her, and the film, completely. Working with cinematographer Mike Testin and editor Josh Ethier, Begos turns “Bliss” into a lurid hellscape, saturated in rich reds, greens and blues, filled with dizzying body-mounted camerawork and copious jump cuts. Metal music pounds and strobe lights flash. It’s all rather overwhelming—so much so that it comes with a warning off the top about the potential danger of such effects for sensitive viewers. It also grows so repetitive that it becomes annoying after a little while—but then again, maybe that’s the point.

Night after night, Dezzy descends into monstrous impulses—bloody orgies of feeding upon human flesh—only to emerge from them inspired anew and ready to attack the canvas. “It’s gonna be my masterpiece,” she says in wonder to her boyfriend (Jeremy Gardner), who has no idea exactly what’s going on with Dezzy until it’s too late. And Madison does give it her all in a physically and emotionally demanding performance. But despite her inner transformation and the artistic results that emerge, Dezzy never really evolves much as a character. She’s as confrontational and rude to strangers and friends alike as she was at the film’s start; then again, nearly everyone in the increasingly ironically titled “Bliss” is vapid and obnoxious.

It’s enough to make you wonder what Begos is trying to say here. Is his film an indictment of the art world as a predatory and dangerous place? Is it an exploration of addiction, likening substance abuse to vampirism? Or perhaps it’s just an exercise in all-out genre excess. Whatever his motivations were, at least the finished product is blissfully short. 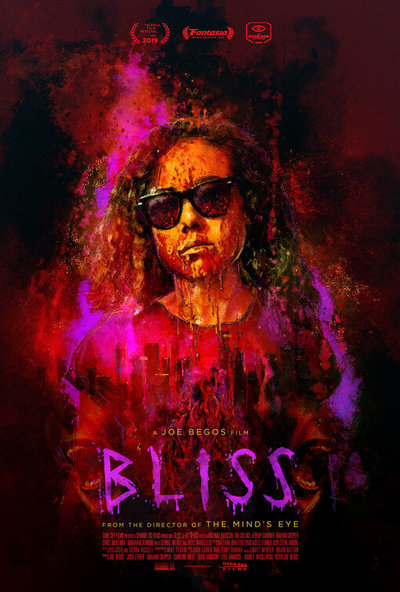