In the wake of Stanley Donen's death last week, there was an outpouring of appreciation on social media, with people sharing clips of dance numbers from Donen's movies, including "Singin' in the Rain," "Funny Face," and "On the Town." Donen got his start as a dancer, and it shows in his treatment of dance sequences. He often filmed in long shot, with a minimum of cuts. When he did cut, it was with great precision, and usually to change the angle in which we see the dance. He didn't insert closeups of the dancer's feet, or chop the dance up in a flurry of quick cuts to make it look more exciting. Dancers do miraculous things, and Donen let us see it. Watching all of those clips drove home how dance cinematography like this is mostly—and sadly—a lost art.

But it's alive and well in “Climax," the latest from French cinema's bad boy, Gaspar Noé. The first dance sequence in “Climax" is so electrifying it took me a while to realize it plays out in one long take. Apparently based on a true story, "Climax" takes place in 1996, when a dance troupe holes up in a community center on the eve of an American tour. Most of the kids in the troupe have never been outside of France (as they admit in their taped audition interviews). They're talented club kids, a diverse multicultural group, wrenched out of the ordinary because what they can do is so extraordinary.

In the first dance sequence, with house music throbbing so loud it obliterates thought, the dancers prowl in their own zones, but there's an organizing principle to their movements as a group. Together, they're a writhing multi-tentacled beast. One after the other, each dancer comes to the front to flaunt their specialty: voguing, contortion, krumping. It's exuberant chaos, but chaos contained in a form where everyone can shine. For the majority of the first dance, Noé keeps his camera stationary, with occasional almost imperceptible zooms in (cinematography by the gifted Benoît Debie). Eventually, and suddenly, the camera moves forward and then way up, until we're pinned on the ceiling, looking down on the dancers, calling to mind Busby Berkeley's overhead shots of kaleidoscope formations. We get to know each dancer without dialogue, we can distinguish each one (the voguing brunette, the contortionist kid in a track suit, the undulating sexy blonde). The sequence is hypnotic, their collective high is so pure.

That high turns dark, and with Noé dark is really dark. The troupe mills around in the common room and Noé drops in on conversations. You put together who's who, the power struggles, the drugs, the sex people are having or want to have. One dancer says, out of nowhere, "I don't dig the vibe in this group" and as the sequence moves on you can see what she is talking about. Everyone drinks from a punch bowl of sangria, and Noé's camera swirls among them, floating, or crawling along the floor, sometimes turning upside down. These drifting, swirling moves are one of his signatures as a filmmaker, pushed to its most extreme in 2009's "Enter the Void", but it’s way "out there" in "Climax" too. Soon, it's obvious that someone has spiked the sangria with acid. Horror dawns, then fury, and then all hell breaks loose. What was once collective energy fragments, and they turn on each other, wracked by hallucinations and paranoia. The second half of "Climax" is an unholy mix of Lord of the Flies and an Agatha Christie novel. The group morphs into a vigilante mob, determined to sniff out "whodunit," pointing fingers at those who didn't partake, throwing a Muslim dancer out into the blizzard, locking the door behind him.

As the horror increases—and much of “Climax" is horrifying—the dancers spread out through the building, having grotesque experiences, with glimpses of awful things happening in adjacent rooms. The lighting is sickly green, or hellish red, the building like the circles of hell, pulsing and monstrous. There are surreal murals on the wall, and one lavendar-blue room is a space where maybe, maybe, you will be left alone to sleep it off. Screams tear through the air. The music never stops.

It's an understatement to say that Noé’s work is divisive. His films cause uproars at Cannes. He is lambasted for his use of graphic violence and sex. 2002's "Irreversible", told in reverse, is his most extreme film, and as harrowing an experience as I have ever had at the movies. "Enter the Void" (with one of my favorite opening credits sequences in film) is vertigo-inducing, told from the point of view of a man wounded by a gunshot, floating above himself, pulled towards death and repeatedly yanked back into life, the camera swirling downwards over and over again. 2015's "Love," a sex movie shot in 3D, was muted by comparison (especially considering all the sex, including a penis ejaculating ... in 3D). The dialogue was banal and the sex pretty banal, too. Noe’s desire to provoke fell flat.

Maybe Noé is an acquired taste. Maybe he's not your thing at all. He can be hard to take, and sometimes it's all a little bit silly, "Climax" included. But Noé is a personal filmmaker, an artist, with a unique vision and style, pulling off feats with bravura, like a lion tamer taking a melodramatic bow. He's grandiose and more than a little bit mad. If you think too hard about what "Climax" means, the film deflates. It's not news that civilization is a thin veneer and human beings need very little excuse to go off the rails. "Climax" has much in common with "Irreversible" and "Enter the Void," although "Climax" is also a weirdo acid-trip polemic (there's that flag of France on the wall, a flag everyone mentions with uneasiness and disgust). The dancers come from all walks of life, but everyone goes down with the ship, clinging to their final shreds of sanity. There's a mournfulness in all of this: "Climax" is haunted by the joy of the first dance. 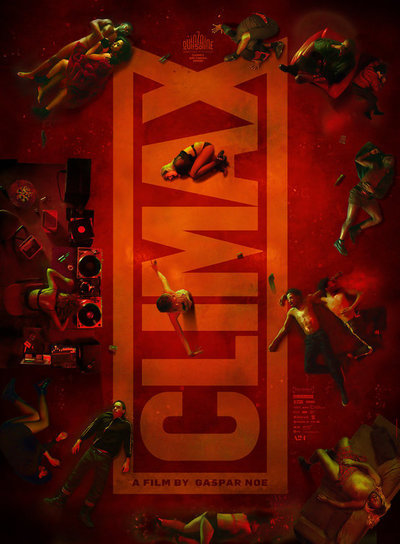