It's a sad fact that American film distributors consider Asian movies—even record-breaking blockbusters like "Wolf Warrior 2" and "Baahubali 2: The Conclusion"—to be niche imports. American companies, like Sony Pictures and the Weinstein Company in the past, either bury or negligibly release most Asian films that are distributed here in America because they think that these films do not have an audience worth pitching to beyond native language speakers.

Case in point: Lionsgate Premiere is now re-releasing "Bleeding Steel," the last of Hong Kong super-star Jackie Chan's four 2017 titles, after dumping the film in a handful of US theaters last December (including Manhattan's Loews 34th Street 14). To be fair: the film was not initially distributed in America by Lionsgate, but rather Chinese distributors United Entertainment Partners. (The film's American publicists claim that Lionsgate's July release of "Bleeding Steel" "is not a re-release" since they are repping an English-dubbed version of the film while the "Chinese" language cut [actually it's Mandarin] originally screened in America this past December.)

Lionsgate's faith in "Bleeding Steel" could be a tentative step in the right direction, though their reasons for singling out this Australia-set superhero/scifi-comedy dud are—at this moment in time and based largely on the film's quality—mystifying. In fact, if you look at either the film's Internet Movie Database or Wikipedia pages, you will find no mention of the film's sliver of a 2017 American release (I do, however, have emails from December to this effect, not to mention the iron-clad proof of a handful of stray tweets). It's almost as if "Bleeding Steel" was either forgotten by American filmgoers and/or actively scrubbed by American distributors because, uh, well, let's try to solve that mystery together.

"Why 'Bleeding Steel'?" is a question that I asked myself (in so many words) multiple times as I watched Special Agent Dong Lin (Chan) chase around an amnesiac heroine (Taiwanese pop star Nana Ouyang) and her equally mysterious traveling companion Sen Li (Show Lo, also a Taiwanese pop star) for ... well, some reason. It's often hard to tell what motivates these characters beyond a blind need to protect each other from the slings and bullets of the pale and punchy villainess known only as "The Woman in Black" (Tess Haubrich) and her colleague, the domineering, cybernetically enhanced martial artist Andrew (Callan Mulvey). All we know is that it has something to do with an incident 13 years ago—foregrounded during the film's noisy but otherwise forgettable opening scene—involving Andrew, Lin, Lin's leukemia-afflicted daughter Xixi, and a mysterious cyborg heart created by cutting edge scientist Dr. James (Kim Gyngell).

The plot-light nature of "Bleeding Steel" wouldn't be so vexing if the film's tone and story didn't seemingly shift at random. You might leave the film with burning questions like: why was this story set in Sydney; what was the point of that tangent involving Caucasian racists and creepy would-be male rapists; why did Li dress up in drag—including a set of fake rubber breasts—just so he could drug somebody; who pays for Andrew's flying space-ship(!!!), and why does he look like the lead singer for a science-fiction-themed Nu-Metal band; and why did Lin give Li a Vitamin B pill (for a hangover) after tying him up? I'm sure you can come up with rationalized answers for some, or even most of these urgent queries.

Still, it's hard to banish all questions of plausibility when major plot decisions are only explained after extensive lulls, and the only thing keeping you engaged is a series of stillborn slapstick routines—most of which revolve around neophyte performer Lo—and lackluster action sequences that all under-utilize Chan's (still impressive, despite his age and many injuries) comedic and athletic skills. There is, however, one scene where Chan makes like Tom Cruise and dangles from the roof of the Sydney Opera House. But this scene's fight choreography and stunt-work aren't as impressive as its setting.

"Bleeding Steel" is also unfortunately just one film in a string of lackluster globe-trotting action films that struggle to confirm Chan's decades-old self-image as a pop cultural ambassador. Last year, he fought the IRA in the grim UK-set spy-thriller "The Foreigner" and Indian ascetics in the loosey-goosey "Kung Fu Yoga." And the year before that, he got drunk and sang Adele in the Mongolian desert with Johnny Knoxville in the relatively superior buddy flick "Skiptrace." And the year before that, he led John Cusack and Adrien Brody in the turgid Romans-vs.-mainland-Chinese war drama "Dragon Blade." And through it all, there were a myriad of little creative decisions that left many wondering what exactly attracted Chan to these projects, and why those singular assets aren't properly synthesized on the screen.

Still, why should one get upset with Lionsgate for trying extra-hard to release a new film starring Jackie Chan? More American distributors should be so bold as to give popular Asian films—especially ones that are influenced by and presented as direct competition for American blockbusters—a second chance to find an audience. I just wish "Bleeding Steel" was good enough to warrant this beguiling new lease on life. 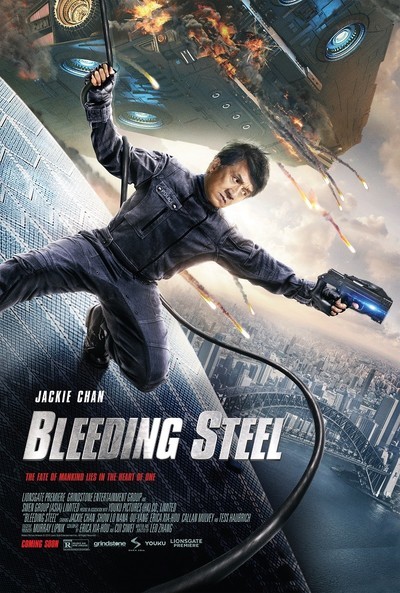 Tess Haubrich as The Woman in Black