For those who ever wondered what it would be like to see John Cusack and Jackie Chan engage in a swordfight (both of you), here is "Dragon Blade." As an added bonus, we also get to witness Chan battle Adrien Brody in a bloody, no-holds-barred clash for an entire nation's fate. One imagines Cusack and Brody sporting gigantic grins in between takes and internal ones during the filming of those fight scenes, even as their characters, respectively, must shoulder the weight of the order of the entire Roman Empire and scheme to maintain a position of power within the realm.

To these actors, this was probably as unexpected a scenario for them to be in as it is for us to watch. Here they are, though, and they don't even get to display the obvious fun this experience must have been. Instead, they spend most of the movie moping around because there are serious matters with which to deal. The severity of all this at least, for the most part, keeps the creeping shadow of cheesiness at bay.

The story is "inspired by true events," and in regards to this statement, we must take the movie's word. It's set circa 50 B.C., on and around the legendary Silk Road—a multi-pathed route that extended from Europe into the Middle East and the eastern coast of Africa to India, China, and Southeast Asia. Chan plays Huo An, the captain of the Silk Road Protection Squad, which attempts to maintain the peace between the disparate 36 nations that employ the route for trade and travel. Huo is a pacifist who believes that unity between the tribes, nations, and races that use the Silk Road is possible. He and his comrades seem to be alone in that belief.

Chan, one of the most well-known and able-bodied stars of martial arts movies, became famous for his willingness to perform his own stunts and his physical dexterity. In more recent years, he has cut back on the former inclination, but while the latter quality may have diminished a bit with age, the kind of fighting he has done in the past is still on display here (Chan is credited as the movie's action director).

Huo is a defensive fighter, only responding to an attack and almost always ensuring that his response is proportionally less than the initial attack. If Huo's enemies come at him with fists, he simply blocks them until a chance to knock them down arises. If they come at Huo with swords, he disarms them but uses the dull end of the blade to defeat his foes. It's a merging of philosophy and fighting that serves the character well in the early parts of the movie, which abandons the philosophy and makes the fighting far more brutal by the story's climax.

The convoluted plot sees the Protection Squad framed for a robbery on the Silk Road. Huo and his men are sentenced to hard labor at Wild Geese Gate, where prisoners from across China are rebuilding that great city that once stood there.

Cusack's Roman general Lucius arrives with his troops, who have exiled themselves to protect Publius (Jozef Liu Waite), the younger son of a Roman consul, from his treacherous elder brother Tiberius (Brody, whose whispered performance could use some subtitles), who has murdered his way into his father's position. Huo leads the prisoners and their Roman guests to rebuild the city under the unified flags of their various nations. In exchange for the Romans' aid, Huo agrees to help Lucius find the Parthian Empire, which can restore Publius to his rightful place.

There are alliances and betrayals aplenty, but writer/director Daniel Lee seems more concerned with establishing and maintaining an epic look and feel than in providing cohesion to the narrative (lots of wide, aerial shots of that city under and after construction). His screenplay relies far too often on flashbacks to fill in plot and emotional gaps. Those flashbacks not only interrupt the narrative but also come across as manipulative hand-holding (along with slow-motion shots that extend beyond the fight scenes, when we expect them). It's not enough that Lee spends the second act of the movie establishing the developing friendship between Huo and Lucius. When the chips fall, he has to insert flashes of the two men smiling from earlier in the movie. If it didn't make an impact in the moment, it certainly isn't going to by means of constant iteration.

Much is made of Huo's optimistic personality and way of thinking. "Make friend of foe," he says and sings. He lectures Lucius on the futility of revenge, but the movie's third act cynically piles defeats and deaths upon Huo, until he has no option but to go against his code in the face of Tiberius' evil ways—oddly positioning the character as a potential martyr for beliefs he must put aside. The fight scenes, which had been playful or focused on Huo's defensive techniques, become frantic, massive battles punctuated by lots of oozing and spraying blood.

"Dragon Blade" doesn't earn this shift, and it comes after too many proclamations of desiring peace for it to come across as anything other than the result of narrative necessity or convenience. By the movie's end, the casting of Cusack and Brody as Chan's combative equals seems one of its lesser oddities. 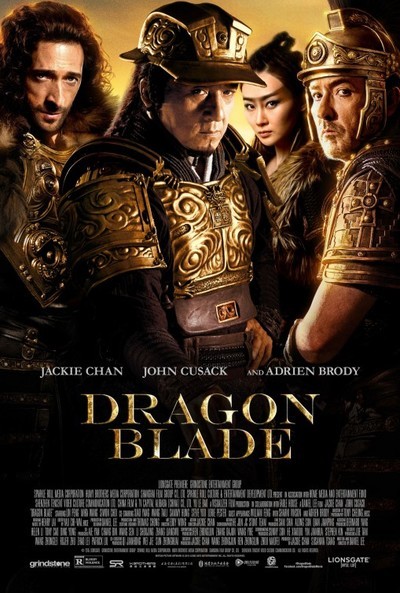 Jackie Chan as Huo An

Sharni Vinson as The Queen