Behold, the first great summer film: a three-hour action-adventure about a leader whose heroic deeds make Conan the Barbarian look like a wimp. The Indian action/period epic "Baahubali 2: The Conclusion" is everything I want but rarely get from superhero and big-budget fantasy movies. Here, larger-than-life characters—specifically a beloved warrior-king Amarendra Baahubali (Prabhas) and his jealous cousin Bhalla (Rana Daggubati)—fight for the Mashimathi throne while declaiming dramatically, flying into thin air, impaling or beheading their enemies, then singing about their exploits.

Thanks to blessedly short flashbacks and fittingly bombastic expository dialogue, viewers of "Baahubali 2: The Conclusion" don't need to have seen the previous film to know what's at stake. Better still: the action choreography is exciting, the operatic plot is compelling, and a genuine sense of optimism undercuts the geysers of blood and thunderous sound effects that accompany the film's stirring set pieces. Here's a splashy, big-budget film with an infectious sense of momentum that wins you over any time key plot points are glossed over for the sake of establishing the next big confrontation. It's loud, it's gory, and there are musical numbers.

One sure sign of quality: despite some seriously ostentatious moralizing, "Baahubali 2" is inspired enough to make you care about characters who are as morally upstanding as Biblical figures and as relatable as refugees from a children's fairy tale. Sure, Amarendra possesses superhuman strength, agility, and filial piety (like many men in Indian movies, he worships his mom). That's only because right initially seems to make might in this universe. But as the movie goes on, it becomes clear that, despite good intentions (writ large through Frank Capra-worthy speeches) even the best people can be manipulated into committing crimes against each other. This is true of Bhalla, an innocent character whose natural jealousy is manipulated into hating his cousin by his petty father Bijjaladeva (Nassar). And it's eventually also true of both Baahubali's mother Sivagami (Ramya Krishnan) and uncle/adviser Kattappa (Sathyaraj).

It's refreshing to see these characters, who are often seemingly painted as paragons of virtue and vice, have their wills tested by various trials—and sometimes fail. These momentary weaknesses sometimes indicate character flaws, as in Bhalla's case. But they also sometimes suggest that good people can make big mistakes. The film's refusal to judge character solely based on how they respond to mitigating circumstances is refreshing.

So is the fact that both Sivagami and Baahubali's devoted wife Devasena (Anushka Shetty) have more than a token amount of influence and power throughout the film. They fight alongside Baahubali as he struggles to remain unmoved by the promise of power (the throne!) while also not looking weak in front of his treacherous brother or his manipulative uncle. Prabhas's character isn't just admirable because of his Herculean feats of physical strength, but because of his ability to make Solomon-like judgment calls before he masterfully glares at the camera, makes a little speech, then soars into battle.

And I do mean "soar." The fight scenes in "Baahubali 2" are so creative that they make even the most frequently abused creative shortcuts seem novel, everything from computer-generated imagery (CGI) to speed-ramping (Zack Snyder's signature technique of speeding up, then slowing down, then speeding up the tempo of a particularly action or physical motion). You care what happens to the cast as, aided by wires, they hurl volleys of arrows at disposable minions and CGI animals.

You haven't seen action scenes with physics and logic-defying choreography like this before. Baahubali breaks massive chains with a mallet, brushes off mortal wounds with one hand, and launches himself over castle walls with determination and deceptive ease. He is merciless on the warpath, devastating a legion of enemy soldiers by lashing them to a tree trunk that he places in the path of a lightning bolt. Baahubali's mom wields a severed head at one point. And did I mention that there's singing? Our heroes' actions are valorized through poetic, Greek chorus-like swooning that perfectly suits the film's paradoxically arch but playful tone.

This is a refreshingly irony-free depiction of demigod-like men and the values and family members they fight to protect. And for once in what feels like a long while, this type of old-fashioned entertainment works without feeling like a throwback or an homage to a preexisting work of pop art. I love "Baahubali 2," partly because it never once felt like a soul-less, committee-assembled piece of entertainment. Many American viewers may wonder how a film that received little to no media coverage could surpass "The Circle," a new studio-produced and distributed thriller starring Tom Hanks and Emma Watson, at the US box office. But you only have to see "Baahubali 2" to know why it enjoyed such a fantastic opening weekend. It's grandiose and fun, and I pray there's a lot more where it came from. 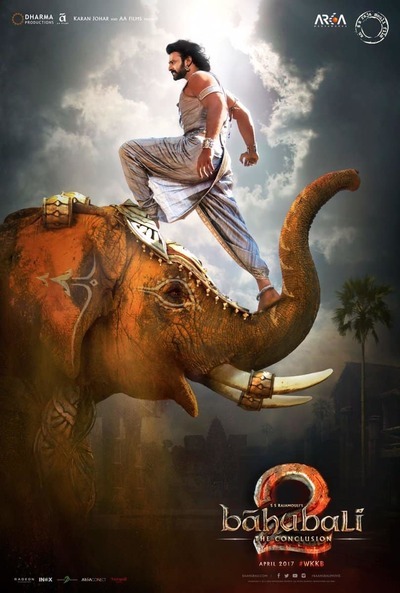