The jingoistic Chinese action flick "Wolf Warrior 2" is not a harmless piece of pro-military propaganda. This is the second highest-earning film in all of Chinese history, and its characters' sense of patriotism is built on the back of racist assumptions that would, in a European or American narrative, be rightfully criticized for being part of an ugly "white savior" power fantasy. In time, "Wolf Warrior 2" might seem benignly kitschy, though its core ideas about how only the Chinese military can save a nameless African country from bloodthirsty native rebels and amoral European mercenaries, will always be gross. After all, nothing dates faster than good intentions marred by pervasive ignorance. But watching "Wolf Warrior 2" with an at-capacity crowd on Sunday gave me an idea of what it was like to watch tripe like "Rambo II" back in the '80s. Like Sylvester Stallone's earlier star vehicle, "Wolf Warrior 2" lectures you, pummels you, then expects you to cheer.

The film starts off as a benignly goofy and technically impressive meathead spectacle. Director Wu Jing reprises his role as Leng Feng, a "Wolf Warrior" special ops officer who travels to an African country after he's imprisoned in military jail for two years for beating up a heartless slumlord. Note that the country Leng travels to is never spelled out, lest Leng's shoot-'em-up safari get tied down by real-world details, or implications of exploitation that the film's four screenwriters flirt with but never satisfactorily address.

Leng is a very tough dude, as the film's rousing, and technically accomplished opening sequence attests. In a virtuoso opening that's made to look like one uninterrupted long take, Leng stops a group of pirates from boarding his Africa-bound sea vessel. Soon after that, Leng further proves his bona fides as a manly bro by out-drinking local Africans (you can tell that he's a real man because he, after pounding down beers, whips out a bottle of high-proof Chinese baiju liquor and keeps on chugging). Then he saves a group of Chinese expatriates from a group of murderous rebels by shooting and kicking the baddies to bits. This scene is also promising since it includes a bit where Leng stops a flying grenade with a box-spring mattress, then discards the grenade so that it only destroys a nearby (and conveniently vacant) car.

But "Wolf Warrior 2" gets really bad once it gets relatively sober. Leng makes contact with local Chinese military leaders, and sets off to rescue noted humanitarian doctors Chen and Rachel (Celina Jade) from evil soldier of fortune Big Daddy (Frank Grillo) and his fellow Caucasian assassins. Big Daddy and his group are not immediately offensive. In fact, they're initially defined by generically stilted characterizations. But in time, Big Daddy's group introduces a largely unexamined element of good vs. bad exploitation inherent in any foreign military intervention in an undeveloped country. Sure, Big Daddy seems harmless when he assures Leng he will "always be inferior" to "people like" Big Daddy, or even when Big Daddy speaks for the film's creators when he exclaims that that he was wrong about the Chinese army's prowess. Realistically, Big Daddy is a bad guy because he's an outsider who doesn't care about the people he's casually slaughtering. Note the way that Jing and his co-writers don't bother focusing on the motives of the rebel groups that Big Daddy represents (more on this shortly). Big Daddy's the real bad guy because he's not a benign exploiter.

By contrast, Leng represents a relatively less troubling but still borderline exploitative outside group that is only fundamentally different than Big Daddy's group because they think of themselves as missionaries with guns. Two of Leng's colleagues even say that they like Africa because of its "good food, excellent scenery and hot women" and because it affords them the opportunity to shoot their guns. Leng stands out because, even though he's been expelled from the military, he insists that "once a Wolf Warrior, always a Wolf Warrior." Leng's colleagues are therefore afforded the opportunity to see the error of their ways simply by being around Leng long enough to be inspired by him.

Leng might be a rousing or just harmlessly proud figurehead if his sense of duty didn't reek of He-man chauvinism. Just look at the behavior of the characters he's rescuing and/or fighting. Look at how the Africans celebrate their newfound savior by behaving like racist fantasies of uncivilized mindless savages: they dance around an open bonfire while pounding on hand-drums. Look at Tundu, Leng's portly African "godson" sidekick who sells bootleg porn and eats a lot. Heck, look at Tundu's mom, an overweight woman who breaks bottles and body-slams African rebels to protect her son. Tundu's mom's heroism might be a sign of her being a secret bad-ass, but her violent outbursts are played for laughs. She's a punchline, not a supporting character. She has no more depth than the African rebels who shoot up Tundu's fellow victims. These guys shout, shoot and curse. There's nothing more to them because the filmmakers do not care about developing them as characters. How can you take seriously an action film's claims to self-serious heroism given all this latent uncritical political exceptionalism?

"Wolf Warrior 2" isn't just intellectually repugnant—it's also dramatically inert. Jing and his co-creators constantly demand that you take their characters' speechifying and humanitarian actions at face value. Like the way that Leng contracts and is quickly healed from the Lamanla virus, a supposedly incurable disease that has killed many undistinguished African characters. Leng, a foreigner, is tellingly the first person to be healed from Lamanla thanks to Dr. Rachel's use of Dr. Chen's research. But why do these characters deserve praise when so much of their story devolves into unconvincing declarations of intent? Why are the action scenes over-edited and shot in a haze of blurry, amateurish, "Sports Mode"-style, run-and-gun hand-held photography? How am I supposed to turn off my mind and just enjoy this as spectacle? "Wolf Warrior 2" is for anyone who wishes more modern action movies were like bad Rambo ripoffs, only minus Stallone's charms, and amplified by Michael Bay-levels of soul-dead military/gun fetishism. Jing will get your blood up, but not in a good way. 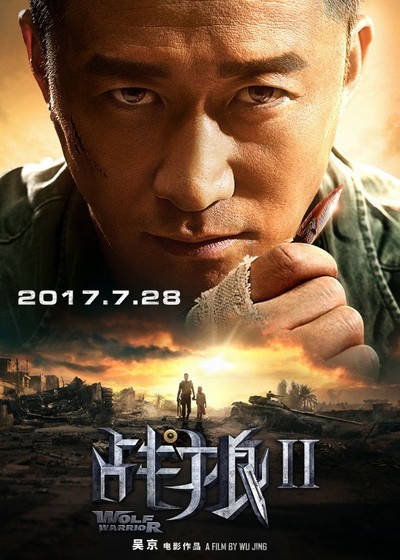