Jackie Chan knows how to age in style. No longer the immortal action star of spectacles like "Rumble in the Bronx," the 62-year-old still creates giddy entertainment out of fighting bad guys, which is more that can be said for his stone-faced Planet Hollywood contemporaries, Sylvester Stallone or Bruce Willis. His energetic, cartoonish inclination goes a long way with his later movies, as is the case with buddy comedy/road movie "Skiptrace." Its story is as common as sunlight, but the entertainment can be just as warm.

You may not be surprised to learn that the pieces for this script are wholesale. Chan plays a veteran Hong Kong cop named Bennie Chan (named after a common film collaborator of Jackie's) who is taking care of his goddaughter, Samantha (Fan Bingbing), the daughter of his late police partner, while pursuing a faceless mob boss named The Matador. Johnny Knoxville is Connor, a self-professed arrogant American and con man, who is introduced in a sloppy flashback as someone wanted by the Chinese crime syndicate for witnessing a murder by people who also put Samantha in danger, all while happening in the same Hong Kong casino that Connor's accused of ripping off. Instead, the Russian mob grab Connor because he impregnated a gangster’s daughter. The Chinese crime syndicate, some bad Russians and Hong Kong police all want Connor, so Bennie steals him from the Russians and tries to bring him back.

Though the script rambles towards its meet cute and never offers any strong villainy, it develops a reliable cleverness with its tropes (it winds itself up to zig with a familiar scenario, and then zags at the last second) and creates vivid contrasts between the accidental partners. Bennie is all about honor; Connor is a snake. In brief heart-to-hearts that worked for me, they bond over being very lonely men. They're just like the contrasting elements of city & country, past & present, as Bennie and Connor travel through different countryside locales and indirectly tour Chinese traditions like the Monihei mud festival. A cherry on top, from this quite crafty script by BenDavid Grabinski and Jay Longino, is that the evidence they need is on a dead cell phone, impossible to charge in the electricity-less countryside.

Once their journey kicks off with Chan pushing a tied-up, hobbling Knoxville through a matryoshka factory while fighting off bad guys, "Skiptrace" becomes compulsively watchable. The energy hardly slacks as the set pieces keep changing every five minutes, offering multiple jungle gyms for Chan and company. And there’s always a spark to how the upper-hand shifts between the fast Bennie and the snaky Connor, the two exchanging punctuating grins. Chan’s charisma is a no-brainer for this type of elasticity, but Knoxville is an animated match. He’s always had an inclusive nature to him, whether famously welcoming us to MTV's “Jackass” or boasting a big, contagious laugh in the series, and he fits neatly with “Skiptrace’”s light, slapstick tone.

Director Renny Harlin continues to be an anti-visionary with patchwork story editing, but he wisely doesn’t screw up the Chan factor. With someone as delightful and timeless as Chan, it's all about taking full advantage. When Chan starts singing an Adele song while hanging out with a Mongolian tribe, it blossoms into a full musical sequence, narrative purpose non-applicable. Harlin’s action filmmaking has the same attitude too: give Chan room with a steady camera, support what breathless abilities he has left with cuts longer than most American action movies and milk the punchlines in between the punches. Even if Chan no longer wants to put his life at risk as a martial arts Buster Keaton, he still has the ability to turn a joke and a get a captivated gasp out of an action sequence, maintaining a singular screen presence.

With his distinct authorship and prolific nature, a Chan movie like "Skiptrace" is basically an act of tradition. The action is the primary spectacle and the values have been consistent for decades, some more endearing (the mentality of “I don’t want trouble!” still guides Chan through combat) than others (the one-dimensional usage of women as damsels in distress, homophobia). In particular, the goofy fun of “Skiptrace" nudges that even Chan's pretty good, pinwheel-like films—amusing but familiar as they spin—are ageless. 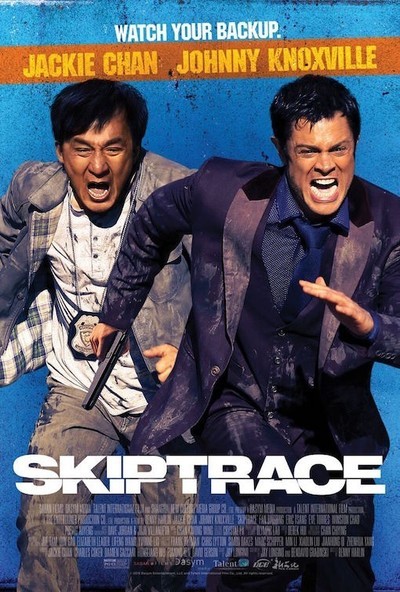