Jackie Chan is one of the rare action film stars to grapple—and sometimes successfully adjust—to his old age. Movies like "Little Big Soldier," "Police Story: Lockdown," and "Chinese Zodiac" acknowledge Chan's limitations as a performer whose body has been through every conceivable punishment in order to nail the next big scene. "Kung Fu Yoga," his latest star vehicle, re-teams him with writer/director Stanley Tong, the filmmaker who helmed classic Chan films like "Supercop" and "Rumble in the Bronx." But "Kung Fu Yoga" doesn't feel like a young man's film. Normally that would be a cause for celebration, but in this case, Chan's latest doesn't just address, but rather shows his age. Unlike "Chinese Zodiac," the third and final entry in Chan's stunt-intensive, "Indiana Jones"-style "Armour of God" films, "Kung Fu Yoga" is bogged down by pretty much everything but Jackie Chan. It's a tribute to Chinese-Indian cultural relations! It's a showcase for (seriously unimpressive) co-stars! It's an (unconvincing) homage to the majesty of nature! It's a showcase for (boring-looking) computer-generated zoo animals! Wait, isn't this a Jackie Chan film?

Chan plays Jack, a well-respected university professor who specializes in Chinese/Indian history. Like Indiana Jones before him, Jack insists that everything valuable belongs to the world/a museum. So, after enlisting the help of his teaching assistants Zhu (Yixing Zhang) and Nuomin (Miya Muqi), Jack inevitably embarks on a quest to dig up buried treasure that takes him from Tibet's frozen tundras to Dubai's urban sprawl. Along the way, Jack's group gets attacked by Randall (Sonu Snood), a descendant of the treasure trove's owners. But conflict only ensues 40 minutes later, after Jack bores us to tears with a multi-part history lesson about the treasure's past. Chan wants to make history come alive(!) so he lectures us multiple times(!!) after an equally boring "300"-style battle sequence that pits ferocious Indian soldiers riding elephants against ingenious killing machine Chinese soldiers. A scuffle ensues, then a really dull auction for more treasure, then he drives a car with a computer-generated lion in it, and then the rest of the movie keeps right on happening.

I can't tell a lie: "Kung-Fu Yoga" is a stinker. It is so miscalculated that it briefly made me forget why I love Jackie Chan films. The action scenes are modest, and therefore easy to ignore when you're watching a scene where computer-generated hyenas attack underwhelming supporting cast members Zhang, Muqi, and their equally stiff co-star Amyra Dastur, who plays an assistant to Indian archaeologist Ashmita (Disha Patani).

"Kung-Fu Yoga" has some good slapstick comedy and adequate fight scenes, but not nearly enough to justify sticking it out for 107 excruciating minutes. I mean, yes, do come for the scene where Chan literally pulls the rug out from under some heavies. And be sure to pony up if you want to see a clever joke where he psyches out a baddy just by making the same huffing and puffing noises that he produces while physically over-exerting himself.

But don't say I didn't warn you when you get to the eccentric—in the worst possible sense—sequence where Chan warns Randall that treasure is "immaterial" since "Everything is empty. The material is not different from the immaterial. The immaterial and the material are one and the same." Chan might have pulled a pseudo-spiritual line like this when he was a younger star, but he would have thrown in a wink and a few good pratfalls too.

Now we're stuck with Old Man Jackie Chan, an unironic onscreen persona that Chan has been honing for decades now. Old Man Jackie Chan isn't completely humorless, but his jokes are fit for a grandpa, like when he gets drunk and sings Adele in "Skiptrace" or when he fights the above-mentioned computer-generated lion in "Kung Fu Yoga." The man is clearly adjusting to what he can and can't do anymore, a concern that is probably more pressing for Chan since he has a metal rod for a spine, several plastic plates in his skull, and has suffered more broken bones than was previously known to be inside the human body. There's not much left of young Jackie Chan, so we might as well get used to Old Man Jackie Chan. In the meantime, go see "Railroad Tigers," Chan's recent war-movie action-adventure. It's got much better action choreography, a stronger supporting cast, neat trains, and quips that aren't totally cringeworthy. You can skip "Kung Fu Yoga," trust me. 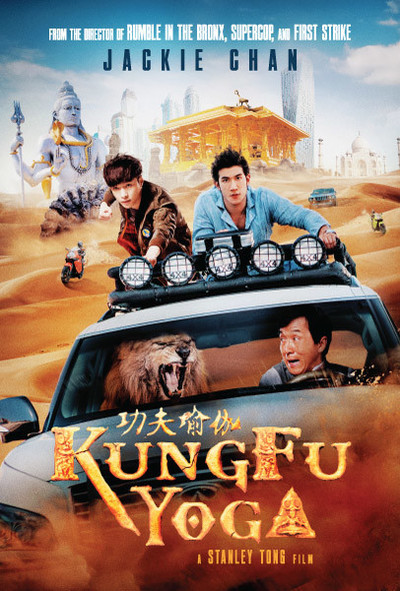