Nicolas Cage often seems to have two modes when he's starring in low-budget genre movies: he's either there to work or he's there to play. When Cage is there to work, he's usually in Humorless Action Hero mode, as in recent junk like "The Humanity Bureau" and "Stolen." Cage's Humorless Action Hero is usually boring to watch (though there are some exceptions from his studio days, particularly "Con Air," which is a nice marriage of work and play). But when Nicolas Cage shows up in a low-budget genre film and he seems to be ready to play? That's when things get unpredictable. He can be unbearably quirky, as in "Arsenal" or "Dog Eat Dog." Or he can be disarmingly weird, as in "The Trust" and "Mom and Dad" (I'm still not sure if I like his performance in "Mandy," a film that I have repeatedly tried and failed to get into).

Enter "Between Worlds," a supernatural thriller that begins with an uncomfortably extreme close-up of a fat guy's butt crack, but only after a Lynch-ian credits sequence involving an unconscious girl floating under a substantial-looking ice floe. The fat guy is Ricardo (Eric Scarabin), and he's just a guy who works at a gas station that Cage's down-on-his-luck trucker Joe happens to regularly frequent. Ricardo rings Joe up with an overly familiar smile, but only after he tries to tempt Joe with some Hostess dessert cakes. Joe is not having any of Ricardo's nonsense today. Because today, Cage is here to play, as we see, er, hear when he selectively exaggerate his "u"s and "o"s when he growls: "Ring it uuuup, Ricardoooooo!"

(I know that may entice some readers to watch "Between Worlds," but let me assure you: this movie may sound amazing, but you really, really do not want to go there.)

"Between Worlds" starts off as a queasy, convoluted neo-noir. Joe meets and soon develops a romantic relationship with hapless single mother Julie (Franka Potente), a lonely, under-developed supporting character in a lead role. Joe meets Julie in a public toilet stall. She's being choked at the time, but it's not what it looks like: it's far worse. Julie's letting a random stranger choke her, but only because being choked strengthens her (almost completely otherwise unremarked upon) psychic connection with her teenage daughter Billie (Penelope Mitchell). And Julie needs to find Billie because Billie is the drowning girl from the film's opening credits.

To make matters even more perplexing: "Between Worlds" also feels like a dark piece of Nicolas Cage fan-fiction, only it stars Cage. Take for example an early scene where Joe warns Julie that she has to let Billie make her own choices. "She's a kid," Joe says. "You have to make stupid mistakes when you're young," Joe says. Then Cage adds, with a knowing smile on his face: "Otherwise, you won't regret anything when you're old." Julie understandably tells Cage's character that "That sounds terrible, like one of those inspiration cat posters." Then Cage shrugs his shoulders with faux-innocence and delivers the routine's groan-worthy (on multiple levels) punchline: "That's how I always let myself off the hook." The camera stays on Cage for a couple of seconds longer, even after Julie starts to respond. That extra couple of seconds is like the visual equivalent of being nudged in the ribs and told, rather than asked: do you get it? Well, do you?

Then "Between Worlds" takes a hard turn to the seriously messed up when Billie, after reviving from her accident, tries to seduce Joe. Billie's true identity is revealed in a complicated twist, one that gives the back half of "Between Worlds" an overwhelmingly icky vibe that only gets worse as this gross twist's thematic implications and narrative prominence increase. That's especially true in one scene where Billie sits next to and masturbates with Joe on Julie's couch—while Julie prepares what appears to be a skinned rabbit. Meanwhile, in the background (seemingly just to make this scene even more obnoxious): an Animal Planet-style nature special—about a wildebeest who, in an unexpected turn, beats up a lioness—plays on a nearby flat-screen TV. I know this is supposed to be funny and uncomfortable, but wow, mission: accomplished, and definitely not in a good way!

Still, you might enjoy "Between Worlds" if you accept that being self-conscious doesn't make you self-aware, and are already a massive Cage-head. This movie has a number of enjoyably perplexing lines like, "You can't take my truck! A man without a truck isn't a man. You know that, right?" Or how about when Julie asks Joe if he wants a beer, and he replies "Does the Tin Man have a sheet metal cock?" Also: in a later scene, Joe has sex while reading from a book with a cover that reads "Memories By Nicolas Cage." Unfortunately, within the greater context of the movie's narrative, the exhibition-like perversion of Cage's "Memories" is not just a cute wink at the audience, but rather a weird and smarmy inside joke that the filmmakers frequently remind us that we are on the outside of. I totally get why "Between Worlds" reads, on paper, like something a Cage fan would want to see. The only catch is that this is one of those rare Nicolas Cage movie where he comes to play, but makes watching him feel like work. If you saw "Mandy," and wished more Nicolas Cage movies were dark, weird, and personal: watch "Between Worlds" and be careful what you wish for. 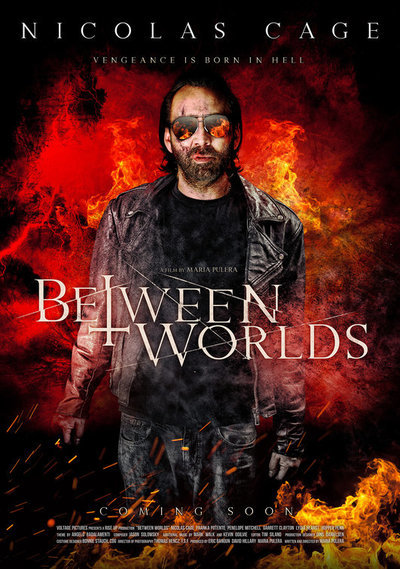 Rated R for strong sexual content, language throughout, drug use and some violence.