Like many great(er) cult films before it, the American horror-comedy "Mom and Dad" is an acquired taste. Your enjoyment depends mostly, though not entirely, on your response to its skyscraper-high concept: what if a mysterious epidemic, triggered by something as simple and inexplicable as a television signal, led parents to want to kill their children? It's a great idea, one that writer/director Brian Taylor—half of the duo behind the gleefully unsound "Crank" films and the relatively tame, but otherwise adequate superhero whatsit "Ghost Rider: Spirit of Vengeance"—has a lot of fun with. Still, "Mom and Dad" is also like other great cult movies in that its creators fail to follow through on many of their more tantalizing ideas. You'll either love or hate this movie based on its energy, and attitude, not its conceptual accuracy, or insightfulness. But what Taylor and his game cast, led by Selma Blair and Nicolas Cage, do get right will leave you excited, and eager for more.

With this in mind: what's most surprising about "Mom and Dad" is how Taylor is usually able to translate his shifting interests in his film's core ideas into a long, gear-shifting adrenaline rush. Many contemporary genre films only have a couple of stand-out moments, or ideas. In fact, if you've heard of "Mom and Dad" by now, it's probably because film festival audiences have already talked up the delirious scene where Cage, delivering one of his characteristically inspired on-camera meltdowns, attacks a pool table with a sledgehammer while singing "The Hokey Pokey." But early audiences don't talk enough about how that sequence ends: Cage and Blair, as unhappy parents Brent and Kendall, have a weirdly touching heart-to-heart conversation about their post-parenthood disillusionment. He had dreams for their future that simply didn't pan out. She responds in kind by reassuring him: so did she. In this moment, you're reminded that Cage isn't just a great man-sized disaster zone—he's also (sometimes) great responding to attentive co-stars like Blair, or even "Bad Lieutenant: Port of Call New Orleans" co-star Eva Mendes before that. And the best part about this scene? Brent and Kendall are bonding right before they make a renewed effort to take a power-saw to their basement door so that they can kill their own children.

But I'm getting ahead of myself. "Mom and Dad" isn't just one of Nicolas Cage's best recent films. This is a movie with such an infectious personality that it somehow manages to transcend a couple of tiresome initial mis-steps. The set-up is simple: Brent and Kendall are cartoonishly repressed parents. This would stand to reason at first since "Mom and Dad" is tentatively grounded by a child-like perspective. More accurately: this is the cataclysmic, hormone-spiked world according to Carly (Anne Winters), a bratty, self-centered high school sophomore who rolls her eyes at everyone but her mild-mannered African-American boyfriend Damon (Robert T. Cunningham). Then again, Taylor's vision for "Mom and Dad" isn't so consistent that we only see events through Carly's eyes. Carly's perspective fitfully takes a back seat to her parents' point-of-view, since Taylor flirts with their pent-up anger, and unaired grievances. We also never really learn much about Carly's skittish younger brother Joshua (Zachary Arthur). All we know about Joshua is that he plays with toy trucks, and doesn't understand what's happening to Brent when Cage's character spaces out whilst daydreaming about his own adolescence, a free-wheeling time when he did donuts in his sports car, and a girlfriend forcefully shoved her breasts in his face.

Yes, "Mom and Dad" is the kind of movie with half-realized ideas and under-developed characters that are cast aside with the same reckless abandon as the film's most casually unsettling material. For example, Damon's dad is a stereotypically drunk, abusive black man. We are led to believe that Damon's dad's post-outbreak actions are not out of character since Damon whines about how his old man is being drunk, and hurtful "again." This one-off joke wouldn't be so offensive if there were more context for Damon's relationship with his dad, like either more scenes with Damon, or maybe even other African-American characters. Instead, there's a Chinese maid who talks like she's fresh off the boat. She also tellingly corrects Brent about her country of origin ("I'm Chinese, not Charlie!"). These two characters, when viewed together, suggest that other-ness is supposed to be funny, or at least ironically amusing in a film where all parents want to slaughter their own spawn. Alas, these two unresolved, and unproductively icky asides go nowhere, and only reveal Taylor's imaginative limits.

Still, Taylor gets so much right here that I can't help but strongly recommend "Mom and Dad" ... with some qualifications. This is the kind of movie whose soundtrack has everything, including Debussy's "La Mer" and two cues from the East Coast punk band Reagan Youth (Queens, New York, represent!). It also features a gruesome, and darkly funny use of Swedish '80s pop duo Roxette's "It Must Have Been Love." Another way that you can tell if you'll like "Mom and Dad?" Measuring your blood pressure after you learn that character actor Lance Henriksen has a hilarious cameo (that's not a spoiler since he's listed in the opening credits). If this news makes you psyched, you are definitely going to plotz for "Mom and Dad."

There are also a couple of scenes that are shockingly well-executed. Taylor and his creative partner-in-crime Mark Neveldine are not usually known for their ability to follow-through on their more outré ideas. But Taylor's enthusiasm is infectious during scenes that appear to be inspired by George Romero's formative zombie films, like ones where throngs of moon-eyed parents loom in schoolyards, hospitals, and classrooms, just waiting for the chance to lash out at their progeny. Cage and Blair's chemistry during the film's dizzyingly entertaining back-half is also noteworthy, as Taylor's dialogue and direction bring out the best in both performers. So yes, I'm sure you think you already know how you're going to feel about "Mom and Dad." But it's better than that, and in ways that you really must experience for yourself. 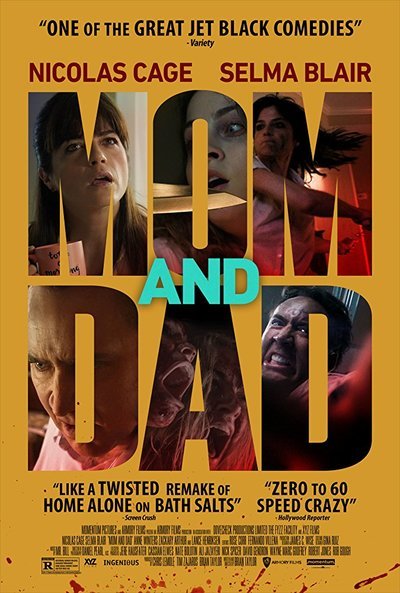