Oh, "The Humanity Bureau!" How could a low-budget science-fiction thriller starring Nicolas Cage go wrong? Let me count the ways. Firstly: straight-faced action hero material has never been Cage's forte. For proof: see any scene in "The Humanity Bureau," an indifferently assembled B-movie set in a post-apocalyptic America where Nicolas Cage drives around looking like a very pale imitation of post-war Jimmy Stewart (think "Rear Window" and "The Naked Spur"). Emphasis on "pale:" Cage looks so drained of color that the combination of his waxy complexion and resting down-in-the-mouth facial expression makes him look like a dried fruit whose color has been artificially removed.

Cage's lack of charisma is a major problem since "The Humanity Bureau" has virtually nothing else to offer. The filmmakers don't seem interested in pandering to either end of the political spectrum beyond two scenes which, when viewed together, can arguably be read as either for or against the current administration. The first such scene is at the start of the film. Disengaged g-man Noah Kross (Cage, who else) attempts to arrest elderly loner Chester (Mel Tuck) for the harsh crime of not contributing enough to the near-future of 2030. But such was not always the case: when Chester was younger, he visited President Trump's White House, as we see in a tacky, pseudo-faded prop photograph of Trump and Tuck smiling together. Chester also owns a pamphlet that reads "Make America Great." That keepsake will probably trigger right-wingers' persecution complexes given that Mel doesn't survive his first scene. Then again, a later scene—which involves a border wall and its connection with the fearmongering tactics of Cage's employers, the Humanity Bureau (yes, that is really their name)—dispels that theory.

No, "The Humanity Bureau" isn't a go-for-the-throat kind of political critique. Instead, it follows Kross as he generically wakes up from his job's inherent inhumanity—he sentences people to be deported to a mysterious internment camp called "New Eden"—and tries to protect indistinct mom and son duo Rachel and Lucas Weller (Sarah Lind and Jakob Davies). Unfortunately, these stock characters aren't worth caring about. All we know about Rachel is that she's suspicious of Kross, and protective of her misbehaving son (he likes to play with matches—in all of one scene). Kross isn't much more developed. He's haunted by a past that everybody, including vengeful former-partner/best friend Adam Westinghouse (Hugh Dillon), wants to know about. Sadly, the backstory that's used to justify all of Cage's moody pouting is as predictable as the rest of the film is rote.

Fans of cheesy movies—the kind that the newly revived "Mystery Science Theater 3000" or its low-hanging-fruit-plucking off-shoot Rifftrax—are bound to be disappointed by the listless "The Humanity Bureau." Granted, there's some campy entertainment value in scenes where Cage broods during poorly back-masked driving scenes. Then again, he frequently fails to make eye contact with Lind, so these scenes aren't just awkward—they're charmlessly dull. There are also some weird comedic scenes between Westinghouse and Agent Porter (Vicellous Shannon, the film's only African-American performer), all of which revolve around Dillon growling increasingly testy while Shannon stumbles around, trying to give his colleague a wider berth. But neither performer is inspired enough to enliven their threadbare—and sadly unmemorable—material.

Ah, who am I kidding? I wished I was watching another Nicolas Cage movie the whole time I was looking at "The Humanity Bureau." Remember when Cage was capable of being both a stolid action/authority figure and a hysterical, outburst-prone nutbar? Some fans—including this writer—have grown more and more fond of unsound Cage vehicles like "Face/Off" and "Snake Eyes" as time goes by. Heck, "The Wicker Man" feels like a bygone golden age of magnetic Cage hamminess compared to lumpen, cold dreck like "The Humanity Bureau." I mean, who even remembers when Cage was capable of simply responding to another actor in the same scene with him? It seems so long ago, but he did it in delightfully off-kilter horror-comedy "Mom and Dad" earlier this year. Film festival attendees who have seen "Mandy," a new psychedelic whatsit from artsploitation genius Panos Cosmatos ("Beyond the Black Rainbow"), say that it's great.

But when is Cage going to stop giving credence to that sadly on-point Funny or Die sketch about his pushover of a talent agent? Granted, Cage doesn't owe his fans a thing and the man's creative eccentricities are a key part of his charm (remember when he took mushrooms with his pet cat?). But please, whatever you do, don't make me try to find the good in bland crud like "The Humanity Bureau." It's not only bad—it's barely there at all. 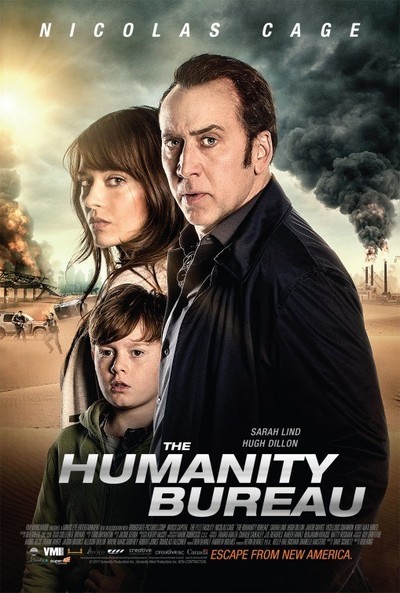