When he's on point, Nicolas Cage brings to mind Klaus Kinski, the brooding, dangerous performer whose collaborations with filmmaker Werner Herzog are typified by naked aggression, violent mood swings, and roiling machismo. But when Cage works with a less decisive director—or just one that's content to let Cage do whatever he wants—he seems to forget what acting is and desperately bellows for attention, like a neophyte actor whose intensity is his fallback pose.

You can see Cage, wearing a ridiculous Tony Clifton bowl-cut wig, dark sunglasses, and wide-lapel lounge singer-style jacket, skulking in the corner of "Arsenal." But it's hard to say what kind of performance Cage is trying to deliver since director Steven C. Miller ("Silent Night," "Marauders," "Submerged") frequently cuts Cage off before he can get going. Cage, like Kinski, is a scene-stealer even when he's over-acting, like a car wreck that keeps finding ways to explode. Cage is undoubtedly the most inspired performer in "Arsenal," a sleepy crime drama about a straight arrow entrepreneur's attempt at rescuing his deadbeat brother from ... some kind of crime boss (Cage, naturally). But because he's never allowed to cut loose, "Arsenal" never comes to life.

Small-time business owner JP (Adrian Grenier) is technically the star of "Arsenal," so any description of the film should reasonably start with him. But the film gets away from Grenier's lackluster character right after the first scene: we flashback to JP's childhood, when his big brother Mikey (Johnathon Schaech) protected him from a gratuitously gory domestic murder by encouraging JP to go to their local video game arcade. When Mikey goes to collect JP, he stumbles into Eddie King (Cage), a bizarre-looking mobster whose hyper-violent actions are undercut by the flesh-colored putty on the tip of his nose. Cage does not get to lash out in this scene, but his character does: Eddie bashes a man's face with a lead pipe and a baseball bat in slow-motion. He threatens to steal the scene, but his breathless line delivery is muffled, and the moment passes too quickly.

Flash-forward to the present: JP has to rescue Mikey from Eddie, who has kidnapped Mikey and is holding him ransom for $350,000. JP can't raise that kind of money in a hurry, so he skulks around with crooked cop Sal (John Cusack) and tries to raise intelligence on who kidnapped his brother. Which is odd because we, as viewers, know it must be Eddie. There's no mystery about this fact since Eddie even discusses a kidnapping scheme with Mikey before he gets kidnapped. Still, JP doesn't know this, so we spend most of the movie waiting for him to catch up. It takes a while for that to happen, so don't worry if your mind wanders whenever Eddie isn't on-screen. Miller tries to enliven JP's otherwise completely suspense-less investigation with plenty of bloody violence. But shots of blood spurting out of headshots, or geysering out of stomach wounds just aren't compelling when the rest of the film isn't so sleazy or alive. These scenes of action-movie violence—amplified until they look like they belong in a Rob Zombie project—seem to belong to another film.

In fact, much of "Arsenal" feels like meaningless, hyper-stylized dithering. What do the darkened color palette and flat, Instagram-style camera lenses tell us about Mikey and Eddie's ostensibly seedy world? Why are we wasting so much time on JP's search? Better yet, who thought Grenier was a strong leading man? He sighs and pouts well, but, like the rest of the creative decisions in the film, appears uninspired. That, realistically, should be the worst charge I level against the makers of "Arsenal"—they have made a very boring film.

But what about Eddie? If you're a Cage devotee, his character's name and appearance should be familiar: he's reprising his role from "Deadfall," a pathetic 1993 neo-noir written and directed by Cage's brother Christopher Coppola that has reached cult status thanks to Cage's derangoid performance. Like "Arsenal," "Deadfall" is mostly tedious, though it does have a few memorably misguided flourishes (looking at you, Angus Scrimm with a steampunk claw hand). But, man, that Cage performance! It's like he was told that his character is a drug user, and therefore felt enabled to go absolutely bus-a-looey.

So why doesn't "Arsenal," a movie that even features a Coppola cameo, let Cage take over? Is the inclusion of Eddie's character the filmmakers' way of admitting that they don't really want to make the movie that they made, and are therefore just amusing themselves? Or are they really so uninspired that they singled out one of the most riveting/hard-to-watch performers working today, but had no clue what to do with him? The rest of "Arsenal" is dull, so why wouldn't Nicolas Cage be, too? "Arsenal" will make you see red, but never intentionally. 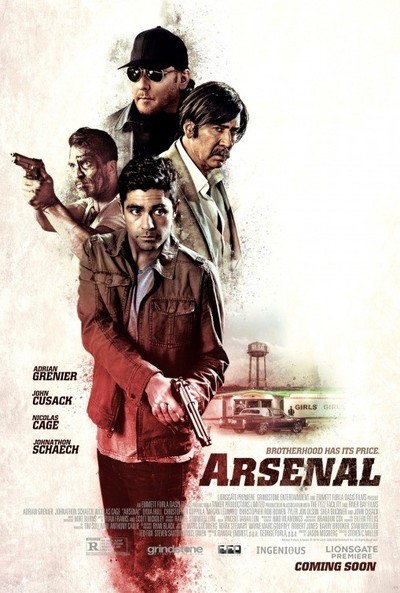 Rated R for brutal bloody violence, language throughout, and drug use.