Does the world really need another movie about Evel Knievel? Well it depends. The pioneering (in a sense) motorcycle daredevil has already been the subject of two fiction films (one in which he played himself, or “himself”), one self-produced documentary, a good number of television specials and retrospectives. Knievel himself passed away in 2007—not in any kind of stunt accident but rather from a pulmonary ailment, exacerbated, reportedly, by Hepatitis C, which the performer likely contracted from one of countless blood transfusions—and the above-mentioned movies have long been forgotten by all but the most dedicated cultists. Which is, in a way, too bad. The first fictional Knievel movie, in 1971, starred George Hamilton as the cycle maniac and Stanley Kubrick’s Lolita, Sue Lyon, as his wife. 1977’s “Viva Knievel,” which featured the man himself at the height of his hubris (he didn’t cotton to having been played by Hamilton six years before) costarred Gene Kelly (!) and was directed by deft Hollywood journeyman Gordon Douglas. Given Knievel’s general disposition at the height of his fame, directing him is (to paraphrase Steve Albini) a job I wouldn’t wish on a dog I didn’t like.

Anyway. The point is that the phenomenon that was Evel Knievel—and he was indeed a phenom—doesn’t get much recognition in contemporary culture, despite the fact that, as interview subject and co-producer of the movie Johnny Knoxville notes early on, the guy kind of invented extreme sports. This highly conventional, intermittently engaging example of the Entertainment Documentary (you know, the kind that livens up its talking heads with rear-projected imagery behind them, and features animated reenactments, that sort of thing) outlines how this cocky kid from Butte, Montana became a post P.T. Barnum icon by essentially risking suicide every time he got on a chopper. Discovering early on that he was kind of thrill crazy, he started using his cycle to jump over cars without any kind of mathematical calculation or preparation. He just got the cars lined up, put up the ramps, and went. This method held for quite some time, up to his ill-fated but fame-producing missed-it-by-that-much jump over the fountains of Vegas’ Caesar’s Palace and beyond.

This haphazard approach led to spectacular successes and perhaps even more spectacular failures. The footage of his crash after clearing the Vegas fountains was the most replayed clip of its time. Similarly cringe-inducing is a scene from earlier in his career, in which he tries to jump over an oncoming cycle, misjudges the timing, and takes a horrific spill. The guy had a capacity for physical punishment that was equal to if not greater than his talent for self-promotion. The movie interviews dozens of sports and media figures, including the recently passed Frank Gifford, who interviewed Knievel frequently on “Wide World Of Sports,” and they all have wild, hairy stories of Knievel’s bravery and wiliness. There’s also bracing period footage of Knievel being a scowling jackass at Snake River Canyon, the site of one of his most poorly conceived stunts, in which he attempted to rocket over the aforementioned geological gap after being thwarted for over a decade in his quest to jump something over the Grand Canyon.

The movie is certainly colorful—this is a guy who, when he had it made, lived VERY large, even if he continued on what seemed like a quest to break every bone in his body multiple times. And it tells, as it keeps reminding us, a very American story. For all that, though, it doesn’t illuminate the guy’s character beyond what’s obvious. Nor does it bestow much depth upon Knievel. No, he’s not a monster on the level of Jack “Pal” Smurch in James Thurber’s caustic short story “The Greatest Man In The World.” Although he’s depicted as behaving pretty badly, particularly with respect to women-chasing, what he does isn’t all that unusual in the annals of late 20th Century rags-to-riches guys who become dickheads when they’ve got some cash in their pockets. There is, finally, even in his most vividly temper-flaring moments, something of a cipher about him. I’m not sure if it’s the movie (competently directed by Daniel Junge, also of “A LEGO Brickumentary”) or if it’s him. Either way, it makes “Being Evel” a less-than-exemplary rep rehabilitation project. 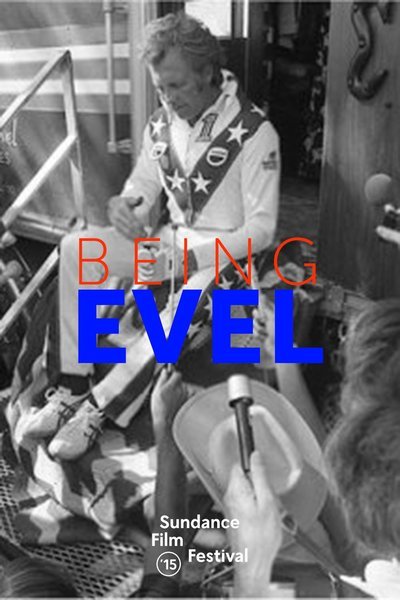