When it was announced that there was going to be a full-length feature film based upon LEGOs, those ubiquitous plastic bricks that people have been playing with and stepping on in their bare feet for decades, most observers scoffed at the very notion of such a thing and assumed that it would be, at best, little more than a extended ad for the toy line. They—and practically everyone else who saw it—were happily surprised to discover that "The LEGO Movie" was actually a smart and endlessly clever film that worked both as a straightforward entertainment and as a smart and occasionally caustic observation of the culture that had developed around them, specifically in regards to the specifically-themed building sets that the company had been concentrating on in recent years that made them a lot of money even as they chipped away at the notion of letting kids use their imaginations to create things instead of following a rigid set of instructions. Based on that, one might hope that "A LEGO Brickumentary," a feature-length documentary about the entire LEGO phenomenon, might also explore the subject at hand with a similarly off-kilter approach but that is not the case with what is essentially a 90-minute infomercial for a product that hardly needs to sell itself anymore at this point.

Hosted by a LEGO-ized version of Jason Bateman (presumably a preview of the upcoming "It's Your Move" set), "A LEGO Brickumentary" takes viewers on a guided tour of all aspects of the LEGO story (while presumably breaking the record for the use of the word "LEGO" in a movie) starting with their humble beginnings in 1957 as the brainchild of Ole Kirk Christiansen, a Denmark-based businessman whose factories had a mysterious tendency to go up in flames through today, where they are the second-biggest toy manufacturer in the world (despite having but one single product to sell) and where there are allegedly 100 LEGO pieces out there for every single person on the planet. There are behind-the-scenes looks at the production process where we get to see the designers and master builders who create and develop the seemingly endless array of new products as well as a detailed look at the creation of an enormous X-Wing that is said to be the biggest LEGO creation ever built.

The toy's enormous fan base of all ages is covered at great length as well from the woman who built an insanely detailed replica of Rivendell from "The Lord of the Rings" to celebrity testimonials from the likes of Ed Sheeran and Trey Parker, who admits that he now finds following the instructions of the themed sets he once poo-poohed to be highly therapeutic after a long day of making decisions at the "South Park" offices. We also learn of some of the more educational aspects of LEGOs, such as how one doctor has used them as a way of reaching out to autistic children and how one fan finds his design for a replica of the Mars Curiosity Rover being manufactured by the company officially after winning a contest through a website dedicated to the vast LEGO community.

Most of this is interesting enough, although a little too self-congratulatory at times, but "A LEGO Brickumentary" never really goes much deeper than that, presumably because of filmmakers Daniel Junge and Kief Davidson not wanting to rock the boat too much lest they upset the LEGO overlords. For example, I would have liked to see a little more debate about the aspect that Parker hinted at in his interview—the clash between the old approach to LEGO-building, in which one got a bunch of bricks and let their imaginations go, and the new, in which one gets a specific kit, often licensed from some popular franchise, and builds them according to their instructions so that they look exactly right. While the film does briefly mention it, I would have liked to have seen a little more about the period in the late 90's when the company began ignoring the wishes of their fanbase by over-specializing their output and nearly destroyed themselves in the process. And while I realize that it would have jeopardized the family-friendly approach that the filmmakers have chosen to adopt, it would have been fun to see more of the more adult-oriented uses that people have made of the toys over the years, ranging from stop-motion recreations of films like "Psycho" to. . .well, LEGO porn.

"A LEGO Brickumentary" is glib and genial and if you know little about them other than the intense pain that stepping on one of them can bring, you may even come away from it having learned a thing or two. However, LEGO devotees—and that is surely the film's target audience—are likely to know pretty much all that it has to offer and then some and asking them to pay top dollar to watch what should have rightly gone out as an extra on a deluxe Blu-Ray edition of "The LEGO Movie" is ridiculous indeed. Those people would be much better off using the money they would have spent on tickets to buy themselves more LEGOs to play with while waiting for the film to arrive on cable, where its modest aspirations and achievements will undoubtedly feel more at home. 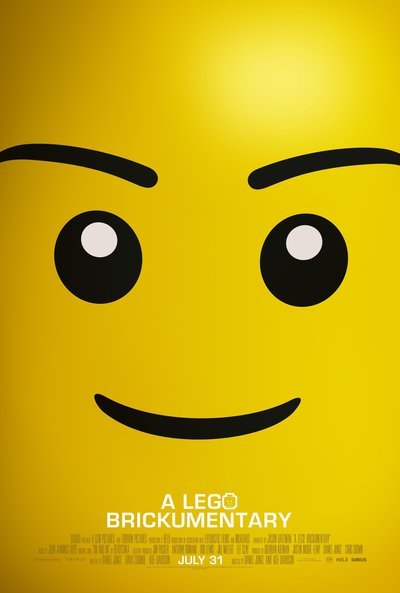