Nick Reiner, the 22-year-old son of director and actor Rob Reiner, isn’t the first rich Hollywood kid to capitalize upon  his experiences in rehab in order to enter the family business. Just last year, Zephyr Benson, the 24-year-old son of ‘70s and ‘80s heartthrob Robby Benson (“One on One,” “Ice Castles”), wrote, directed, executive-produced and starred in “Straight Outta Tompkins,” about a well-off New York high-schooler who goes from recreational drug abuser to hardcore dealer. Father Robby helped out as an executive producer and composed the film’s score. But the end product was mostly a reflection of the younger Benson’s still-in-the-formative-phase talents.

But the senior Reiner, whose filmmaking resume includes such durable classics as “Stand by Me,” “The Princess Bride,” “When Harry Met Sally …” and “A Few Good Men” actually directed, produced and helped shape his son’s screenplay, which was partially influenced by their own contentious relationship over Nick’s numerous failed attempts to stay clean.

Interestingly enough, “Being Charlie” (co-written with fellow recovering addict Matt Elisofon) proves to be a kind of  career rehab for Dad. His behind-the-camera output has taken a regrettably persistent plunge in quality since the mid-‘90s with such non-starters as “Alex & Emma,” “Rumor Has It…,”  “Flipped” and “And So It Goes.” And about the only reason that the fountain of schmaltz known as “The Bucket List” became a hit in 2007? It had a catchy title as well as first-time co-stars Jack Nicholson and Morgan Freeman as polar-opposite buddies on their death beds.

Granted, “Being Charlie” isn’t the most original story. We have seen plenty of recalcitrant druggies and alcoholics in  group counseling sessions on TV and film before (for me, nothing beats Edie Falco’s amazing seven-season swan dive into the nightmare world of pain pill abuse on Showtime’s “Nurse Jackie”). But this dramedy about a troubled child born into privilege who runs away from a remote Utah facility on his 18th birthday and back to his parents’ palatial Bel-Air mansion is an emotionally honest turn for the better for papa Reiner.

There’s a youthful kick to the dialogue along with a matter-of-fact edginess (including nudity, frank sexuality and crude language) in what feels like a vicarious portal into private woes that are public knowledge. In this case, Pop (“Princess Bride” alum Cary Elwes) is David Mills, a retired actor turned politician who’s in the midst of a campaign for the California governorship. The last thing he needs is for his junkie son Charlie (Nick Robinson of “Jurassic World”) is to upend his chances to win during the final rounds of glad-handing. He gives this cynical, angry mess of an adolescent a choice: Either enter adult rehab, now that he has come of age, or be tossed out on the street and face charges for his Utah hooliganism.

Neither father nor son is averse to allowing their onscreen alter egos to come off badly. Robinson, whose boyish Sean Astin-like features and physique—imagine a sardonic and bitter teenage hobbit—provide a nice contrast to such lowlife behavior as stealing Oxycontin from a terminally ill old lady whose son has kindly given him a lift.  Meanwhile, dad is a tough-love bully (mom, played by Susan Misner, is the comforting good cop) who greets his just-arrived son not with a much-needed hug but with a burly hairy stranger in an ugly Hawaiian shirt, who proceeds to commence with an intervention while spouting such well-worn clichés as, “No one said that sobriety is easy.”  What would be easy is to hate David, but Elwes is able to summon a world of hurt, pain and frustration in the eyes of his character even while sporting a politician’s plastic smile.

So off Charlie goes into yet another treatment facility. But this one has a seemingly cool girl named Eva (Morgan Saylor) to break the monotony, who smokes clove cigarettes and matches him sarcastic comment-for-sarcastic comment. When he whines about being in rehab again, she counters, “Where would you like to be? Would you be OK with Iraq, Dafur, New Jersey?” He smiles. “Maybe not New Jersey.” Eventually, they go to separate halfway houses split by gender. Turns out friendships are fine among program participants, but not romance. As a sympathetic counselor (hip-hop artist Common) explains to Charlie, “Getting sober is a selfish thing. You got to help yourself first.” Of course, his words will prove all too prophetic when a now-dutiful son still can’t catch a break from his dad and resumes his old habits—just in time for Election Day.

While it’s not exactly “Trainspotting,” “Being Charlie” strives for authenticity in its main character’s ups and downs even if the plot isn’t as compelling as the performances. At least the material doesn’t shy away from questioning the conventional wisdom behind such programs and suggests that they don’t always fit the needs of everyone while profiting from repeat offenders.

Also welcome are some original bits of inside-showbiz business that flavor the story. David, best known for a series of pirate films, is constantly pestered by adoring constituents who repeatedly parrot his “Yo ho ho” catchphrase. One has to wonder how many times former “All in the Family” star Reiner has been called "Meathead" over the years.

Also offering comic relief is the fact that Charlie is an aspiring stand-up artist who finds inspiration in such old-school joke tellers as Moms Mabley, George Carlin, Richard Pryor and Lord Buckley. Carl Reiner, granddad to Nick, would be proud. Even the fact that one of Charlie’s rehab cohorts does a mean imitation of Nicholson’s rebellious McMurphy in “One Flew Over the Cuckoo’s Nest,” as a means of survival, provides amusement.

Working on “Being Charlie” probably was a catharsis for Nick Reiner and it clearly has allowed his father to exorcise some of his lazier filmmaking tendencies of late. Like most family affairs, the film isn’t perfect but it is memorable, and provides a passable high when it is over—one that you haven’t felt from a Rob Reiner production in ages. 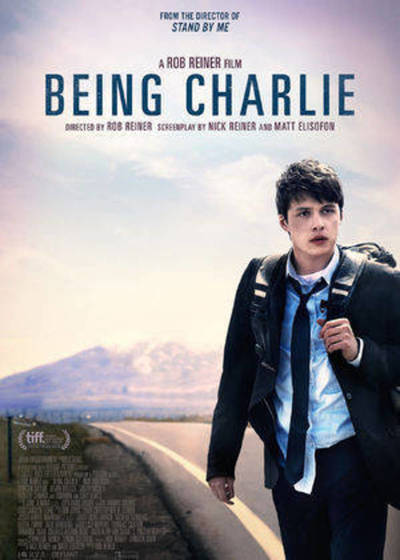