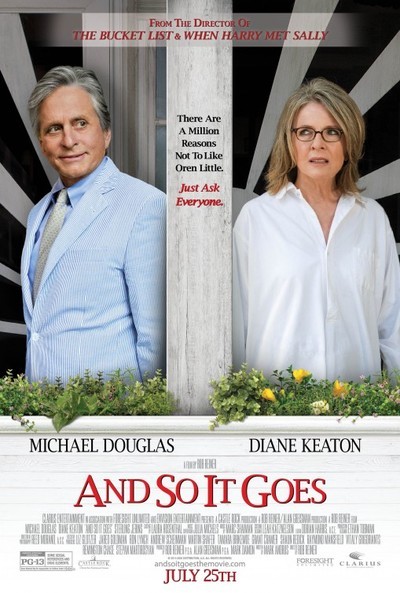 Rated PG-13 for some sexual references and drug elements

"And So It Goes" does what it needs to do for its target audience in thoroughly sufficient, mediocre ways. An unlikely romance between widows in their 60s, it aims to charm older, underserved moviegoers—those who get a "The Best Exotic Marigold Hotel" or some such only about once a year—but it does so with barely a trace of wit, verve or inspiration.

It’s also not "As Good As It Gets," even though both films share the same screenwriter (Mark Andrus), misanthropic male protagonists and interchangeably forgettable titles.

Rob Reiner is firmly in late-career mode here, playing it safe and hitting all the expected notes as he directs veterans Michael Douglas and Diane Keaton, who are nothing if not total pros as they try to breathe life into such strained material. During the moments when "And So It Goes" isn’t overreaching for wacky laughs or going all gooey and soggy—when Douglas and Keaton’s characters have the opportunity to open themselves up to each other, quietly—Reiner’s film can be effective and even enjoyable. But those moments are rare.

Douglas, as longtime Connecticut real estate agent Oren Little, is very much in the mode of Jack Nicholson’s curmudgeonly "As Good As It Gets" character, Melvin Udall. He’s turned cranky and cruel since his wife’s death from cancer a decade ago, unleashing his vitriol on children and the elderly, strangers and longtime colleagues alike. He’s a casually racist drunk and he hates dogs. Surely he is due for a change of heart.

Keaton co-stars as Leah Hartman, Oren’s next-door neighbor in the quaint, waterfront fourplex where he’s living while he tries to sell his $8.6 million mansion. Her husband also died a while ago; since then, she’s tried to reinvent herself as a lounge singer and serves as the building’s de facto den mother. (Reiner stops the film for large portions of time to let Keaton warble classic tunes in a heartfelt whisper. It is very uncomfortable to watch.) Basically, she is every character Keaton has played for the past decade or so: flighty and full of supposedly lovable tics and quirks. Surely, she will facilitate Oren’s change of heart.

Actually, they change each other in speedy, implausible ways: He helps her toughen up, she helps him soften. Nothing here is a spoiler. The outcome is evident from the poster alone.

Here’s what forces the feel-goodery: Oren’s estranged son (Scott Shepherd), a recovering heroin addict, shows up one day out of nowhere and announces he has a 9-year-old daughter (Sterling Jerins). He also needs Oren to care for said daughter while he goes off to prison for the next nine months (for something he didn’t actually do, naturally). Do you think it’s possible that Oren and Leah will learn how to come together and function as a makeshift family for this shy, sweet little girl?

Oren has a penchant for saying the wrong thing at the wrong time—that is, until he promptly turns around and says the most perfect, poignant thing when it’s needed most. Similarly, in a moment that’s meant to be a sad goodbye, Oren will crack a terrible joke and ruin the mood. Reiner repeatedly makes these jarring shifts in tone, but mostly is working in sitcom mode. Whenever a Rottweiler appears, for example, you know it’ll either a) take a dump on the lawn or b) hump a giant, stuffed teddy bear.

Reiner himself actually appears in a small role as the supportive, toupeed pianist who accompanies Leah as she performs at a local restaurant. At one point while picking her up for a date, he accidentally steps onto a Slip ‘N Slide, falls flat on his butt and gets soaked. It’s an apt metaphor.