Beasts of No Nation

The filmmaking craft of "Beasts of No Nation" is vividly apparent, and its emotional power is undeniable. Why, then, does it feel dubious in certain ways, and perhaps troubling for the wrong reasons?

The film's director, writer and cinematographer, Cary Joji Fukunaga, is a master of imaginative and dynamic images; he proved as much in "Sin Nombre," "Jane Eyre" and season one of "True Detective," and he proves it again in this bloody, despairing film about a child soldier in a nonexistent African country. Based on the same-titled novel by Uzodinma Iweala, a Nigerian doctor and sociologist who began the story as a thesis project at Harvard, the movie immediately puts us in the shoes (and sometimes bare feet) of its hero, eight year old Agu (Abraham Attah). He narrates parts of the movie in a mostly embittered but occasionally lyrical voice-over, telling us about his mother and father and siblings and the peaceful life they once enjoyed.

Then the country is turned upside-down by revolution. Agu's family belongs to a particular group that ousted the people who are now trying to take over the country (or as they might put it, take the country back). "You can feel the ground washing away beneath your feet," he tells us. Soon the village is in chaos, soldiers are clomping down the street shooting rifles at strangers, bodies are everywhere, and Agu is running through the jungle alone. Then he comes upon some armed and dangerous boys about his age or slightly older, their hats and torsos bedecked with camouflaging vegetation (a very "Lord of the Flies" image, pushed maybe a bit too hard) and then we're into the main story, which finds Agu being protected and trained by a man known only as The Commandant (Idris Elba).

The Commandant is magnetic and foul, hilarious and frightening, hateful and tender. He's an unholy combination of a battlefield commander, a drill sergeant, a football coach, a decadent older brother, and the patriarch that a lot of these boys either never had or recently lost to revolution (or revolutions, plural—we get the sense that governments flip over all the time here). The boys adore The Commandant because they think he's teaching them to be men, specifically warrior-men, but he's really teaching them to be murderers, thieves, rapists and torturers who wrap their bloodlust and greed in ideology that seems half-understood when it's comprehensible at all.

The smartest thing about "Beasts" is the link it draws between the Commandant's soul-sucking brand of motivational therapy and the grinning swagger of soldiers who invade Agu's village near the start of the film and terrorize Agu and his relatives along with other captured citizens. They spout slogans, but it's clear that the slogans are less a justification for horrific violence than a pretext that gives them permission to do what they might have done anyway, in their imaginations, or on dark stretches of road in whatever part of the country they originally hailed from. They're people who either became criminals after putting on uniforms or always were criminals. Many soldiers throughout history have essentially been criminals in uniforms; Americans in particular seem to hate admitting even the possibility that this could be true, but it is true, and it has always been true, and Agu's story is one more exploration of the phenomenon. "Gentlemen may talk of the age of chivalry," says the narrator of "Barry Lyndon", "but remember the ploughmen, poachers and pickpockets whom they lead. It is with these sad instruments that your great warriors and kings have been doing their murderous work in the world."

"Beasts" does a solid job of showing how quickly a child's moral compass can be knocked off-axis, how men like The Commandant can bask in the adoration of immature or gullible followers and become despots within the dictatorships they serve, and how easy it is to teach a child to kill and rape when the reward (in addition to food, shelter and protection) is love, or a twisted facsimile. The final section of the film, which sees Agu witnessing the limits of The Commandant's power and starting to see through him, is probably the strongest; Elba, who has a magnificent glowering magnetism throughout "Beasts" but never relies on it exclusively, is never more fascinating than when The Commandant's seeming omnipotence is whisked away like the curtain which reveals that the great and powerful Oz is just a man.

And from start to finish, the movie is imaginatively made. In an age of tediously prosaic direction that is mainly about capturing dialogue and action, often from as many angles as possible, this filmmaker makes bold choices. He thinks about where to put people in the frame, how to light them, and how to move the camera, not merely to tell the story and showcase the dialogue and performances, but to boil a moment down to a single image, like the shot of Agu and his family hiding from invading soldiers in a shed, the passage of enemies outside indicated by the way that the light streaming through bullet holes in the door flickers as men pass by. There is magnificent use of shadow and silhouette throughout, and small details (such as the red clay on Agu's feet as he kneels in supplication, and the rhyming shots of boys carrying other boys on their backs) that seem poignant or mysteriously pitiful, in the manner of great photojournalism. And in the the early stages of the movie, Fukunaga finds ways to suggest unimaginable horror without trying to actually imagine it (and risk making it too literal or too sensationalistic, or simply failing). As Agu runs from soldiers shooting at him and his family and friends there is a back-and-forth whip pan that shows you how a single gunshot has changed the hero's world irrevocably, and it's all the the more violent-seeming for eliding the death itself.

While nobody should expect a film on this topic to be bloodless, there are moments when the movie seems to lose its grip on sense, and shade away from carefully-calibrated violence into imagery that feels less horrific than horror-movie-like—such as the way a child soldier's machete blade splits an innocent man's skull open in a close-up as he screams (like something out of a slasher film), and the way the camera follows Agu around a house while his colleagues bellow and bicker and kill and rape (while more restrained than anything in "True Detective," it still feels like an attempt to outdo that first season's showy one-take action scene). Too much of this kind of thing, and you might start to wonder if the filmmaker's virtuoso inventiveness is overwhelming his commitment to realism and attention to context (none of Agu's fellow soldiers are developed to the point where you really grieve for their deaths or are disgusted or angered by their atrocities). And then you might wonder why it was necessary to have all of the characters speak in pidgin English when they're supposedly speaking another language entirely, and whether the shots of soldiers' bare asses and genitals are an honest attempt to capture a particular kind of affectlessness or a form of deadpan hipster exoticism.

Once you've gone down this skeptical road you keep noticing more and more things about "Beasts" that feel somehow untrustworthy, or at least not immediately defensible. And it's a short hop from there to the realization that this is the second recent, highly acclaimed film about dark-skinned people not directed by an African or an African-American that has the word "Beasts" in the title. After that, you might realize that the Western commercial cinema almost never tells stories of Africa, except to sentimentalize European colonalism ("Out of Africa," "An African Dream", "The Ghost in the Darkness") or show the depths of depravity of which Africans are capable ("Hotel Rwanda," "The Last King of Scotland," this). And then comes the question, maybe, of what, exactly, is being communicated in "Beasts of No Nation," beyond the fact that a boy has been horrendously traumatized by being conscripted and taught to torture and kill? Not much, really, even though, as stated up top, the movie's visceral effectiveness is so overwhelming that to deny it would be dishonest.

Certain questions linger: Why are we being told this particular story, at this particular time, in this particular way? Is the message or point so urgent that it required a portrait of African men behaving like beasts for two hours? The film is good to excellent in every way except morally, and there it's questionable more often than it should be, not because it's an evil film, or because the filmmaker or actors are bad people, but because the interplay of means and ends has been under-thought or misjudged, to the point where the film becomes a catalog of obscenities: a horror thrill-ride drawn from life, a thing for viewers to test themselves against while feeling just awful about Agu and his country, whatever its name is. 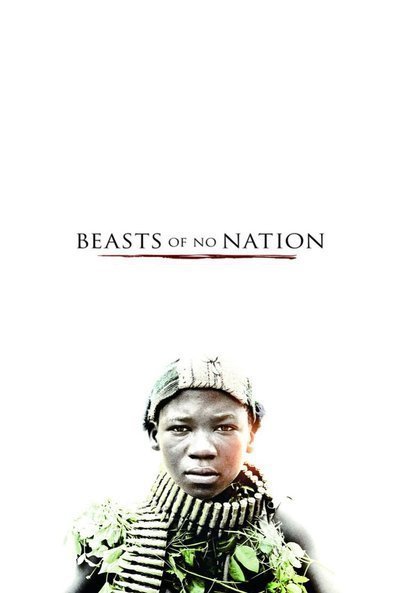