The horror movie trope about how you shouldn’t build housing tracts on indigenous lands used to be considered a mildly progressive one. Nowadays it looks a little patronizing, to say the least. And given that recent developments in historical interpretation have revealed that, to put it in simplistically blunt terms, all land is in some form indigenous, the trope seems narrow as well. (This is one of the reasons, indirectly, that Jordan Peele’s “Us” felt like something new.)

In any event, when “Barbarians” opens with a promotional video in which Tom Cullen’s Lucas, an instantly smarmy beardo, touts a new idyllic community at a site in rural England called “Gaeta” (the Gallic word for "gateway"), one arches an eyebrow a little. And perhaps one also asks, “And where are they now, the little people of Stonehenge?” One supposes it’s at least commendable that “Barbarians,” a horror movie that aspires to stress you out early-Ben-Wheatley style, albeit under the direction of Charles Dorfman instead, doesn’t quite go to that obvious place.

In spite of a couple of intimations of the supernatural, which involve a fox and are quickly dropped, the film’s conflicts stay earthbound, and as the title suggests, are engineered to make Points About How Despite The Veneer Of Civilization Modern Man Remains To Some Extent In A Primordial State. Lucas’ opening video pitch is disrupted by a shot of Lucas in a dark place, his forehead covered in blood, wrapping up his pitch. Um-hmm.

We are then introduced to Adam (Iwan Rheon) and Eva (Catalina Sandino Moreno), who are apparently the first residents in the lovely Gateway development. They’ve earned the house in exchange for creative services they’ve rendered unto Lucas, or so they believe. At a dinner party later that evening, Lucas will try to welch on the deal. But let’s not get ahead of ourselves. It’s a beautiful morning at the house, and it’s Adam’s birthday, and he goes out for a run, where he encounters a dead fox. Which then turns up inside the couple’s kitchen. Which makes Adam fretful. A neighbor of sorts helps clean it up. But Eva is exasperated by Adam’s waffling.

Adam has some troubles with his conscience, too. He Googles himself, and down that rabbit hole, he reads news stories about Lucas and the development, and how a former partner of Lucas, who owned the land on which this lovely house was built, died of a heart attack soon after initiating a lawsuit against Lucas.

So the stage is set for an uneasy dinner. Lucas shows up with girlfriend Chloe (Inès Spiridonov), a young artist who’s also an ardent admirer of Eva’s. Everyone seems to enjoy busting on Adam. He announces the topic of his latest creative project, about a “prehistoric man in the modern world,” and the entire table explodes in mirth, citing Brendan Fraser and “Encino Man,” which apparently was titled “California Man” in the U.K. As Adam and Lucas exchange toxic banter, one is inclined to wonder whether Adam is EVEN a Beta male.

But wait. Adam gets tetchy when word slips out that Chloe is pregnant, and he confronts her when she visits the bathroom. These two have a past, apparently, but Chloe instructs him that “it never happened.”

And then the home invasion happens. If you’ve been paying attention, the subsequent “revelations” will come as no surprise, and the plot turns will bear out why the characters have the names Dorfman has given them. The director carries out his ultimately banal aims with commendable dispatch, and it’s always interesting to see Moreno play a character who’s not a living saint (she’s done it before, I know, but I’ve not seen it too often myself). But as an individual who’s not likely to have his dream house handed to him anytime soon under any circumstances, shady or not, I couldn’t relate. 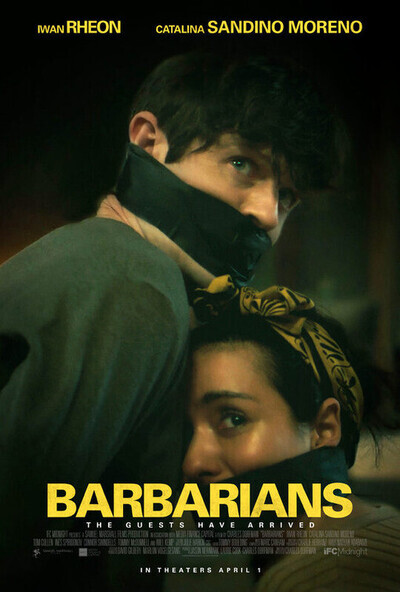 Will Kemp as John