Spoken by sensitive actors, the exchange vibrates with vulnerability and humor. Rita Kalnejais' screenplay "Babyteeth" (based on her stage play) is full of such moments. It's one of those scripts where every character has their own cadence. No two characters sound alike. Because of this, the film—even though the plot is well-worn and familiar—sparks with spontaneity, with humor and surprise, with moments of deep profundity and emotion. "Babyteeth" is director Shannon Murphy's feature debut, and what an impressive debut it is. You may think you know where it is going. And maybe you're right. But how the film gets there is a very different matter.

"Babyteeth" is ostensibly "about" a dying teenage girl who falls in love for the first time, but what it's "about" is different from what it actually is. What it is is a story about four people dealing with the unexpected in their lives, be it cancer, loss, love. The characters sometimes face the unexpected with grace, and sometimes with the opposite of grace. They act out, throw tantrums, push each other away. They fumble, make mistakes, apologize badly, self-medicate (or over-medicate). Through all of this is a poignant sense of people grappling with the intangibles of life, life's ephemeral experiences and textures, the moments between the lines that make life worth living.

When Milla (Eliza Scanlen) and Moses (Toby Wallace) meet on the train platform, there is an instant and inexplicable connection. Barely any dialogue is exchanged, but the magnetic force is undeniable. She is in her school uniform, and her hair is long and blonde (we soon learn it is a wig). He is older than she is, and a loping gangly mess, with hair in a rat's-tail and a scabbed face. But he attaches himself to her instantly with an easy disarming intimacy. When her nose starts to bleed, he rushes to help her handle it and Milla is overwhelmed by him. Because of how Murphy films this initial interaction, and because of how the actors played it, I had no idea what would happen next. Was Moses up to no good? He asks her for money initially, but when she hands him a bill, he tells her it's too much. Milla cuts school, and spends the day wandering around with Moses, who appears to have no home, and—from the looks of it—may be high on something. Milla is completely enraptured.

Milla's parents, psychiatrist Henry (Ben Mendelsohn) and former classical pianist Anna (Essie Davis), do not know what to do when their over-protected daughter—who still has one of her baby teeth—brings Moses home for supper. Henry is more sanguine than his wife, who slurs, "Lucky for everyone I forgot I'd taken a Zoloft when I took the two Xanax." Her parents' concerns about Moses push Milla into rebellion, but the rebellion is complicated. She's still a child. The kids at school are scared of her cancer. She has no experience with boys. So she's little-kid and rebelling-teenager, simultaneously. Moses dazzles her: "He's not afraid of anything," she tells her parents. When Anna says, "That boy has problems," Milla fires back, "So do I!" Even when Moses breaks into the house in the middle of the night to rob the family, Milla rushes to his defense.

"Babyteeth" avoids almost every cliche you might expect in this kind of material. Henry and Anna don't forbid Milla to see Moses. Moses is their daughter's first love, as ridiculous a choice as he may seem. Milla might not live to adulthood, and they don't want to deny her the experience. At one point, Henry and Anna stand in the kitchen, watching Milla and Moses wrestle in the back yard, and Anna drones, "This is the worst possible parenting I can imagine."

"Babyteeth" is a quartet (there are a couple of peripheral characters who feel tacked on). Henry, Anna, Mille, and Moses share the screen: it's their story, not just Milla's. Mendelsohn has such a kind face, but it's kindness soured with a kind of philosophical realism. Within that realism is a world of tenderness. Mendelsohn is often quite heartbreaking here. Essie Davis, who gave one of my favorite performances of 2014 in "The Babadook," is both funny and poignant: Anna is clearly addicted to pills, running from the ghosts of her thwarted past, as well as the ghosts of a future without her daughter. Together, Mendelsohn and Davis—with frayed nerves and exhausted resources—create an extremely real long-married couple.

The real laurels go to Eliza Scanlen, who's had quite a year, with HBO's "Sharp Objects," "Little Women" and "Emma," practically back to back. In both "Little Women" and "Emma" she played secondary characters, and "Babyteeth" shows she can carry a film. When Milla stares at the back of Moses' neck, Scanlen isn't just showing Milla's first experience of desire. What is on Scanlen's face is a kind of quiet grateful awe, that this boy is here, miraculously, that she gets to feel these new feelings. It's an amazing performance. And Wallace, so open, so accessible, is nothing less than a wonder. He has the rare gift of personal charisma, and—in playing Moses—it's not charisma calculated to get something in return, but the real deal.

The teenage girl + cancer/illness combo is used in film so often it's a cliche, a lazy shortcut so the lead male character can learn/grow/change. "Love Story" (1970) launched a million imitators still clogging the landscape: "A Walk to Remember," "Garden State," "The Fault in Our Stars," "Me and Earl and the Dying Girl"... But "Babyteeth" doesn't work that way. Cancer is the shadow under which the characters live. All of them are grieving, and not dealing with it well. Both Milla and Moses transform. Not because Milla has cancer and is therefore "inspirational", but because love is a transformative experience.

A couple of times "Babyteeth" calls to mind Martha Coolidge's 1983 film "Valley Girl," where a kid from the Valley falls in love with a kid from Hollywood. Designed as a culture-clash movie, "Valley Girl" is really the story of the wonder of falling in love for the first time. Coolidge said: “I felt from old movies that the most important thing that you can do in a movie is to play wanting. It isn’t actually the getting of the person that is hot on the screen. It’s the wanting. It’s the electricity. The eye contact, the reflecting of each other that people do ... This is the theory of electricity and wanting.”

"Babyteeth" understands "the theory of electricity and wanting" so well. When love comes, it really is like a miracle, and don't let anyone tell you different.

Available at select theaters and on digital platforms and VOD today, 6/19. 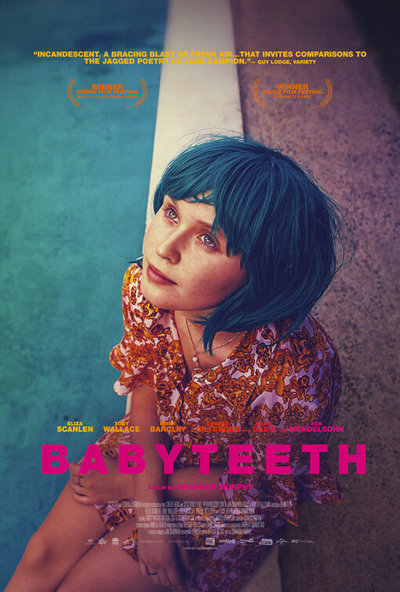 Tyrone Mafohla as Boy on Platform