Family ties pull so tightly that they leave scars in the vicious and brutal “Sharp Objects,” an eight-episode mini-series premiering on HBO on Sunday, July 8th. Directed by Jean-Marc Vallée, who helmed the multiple award-winning “Big Little Lies” last year for the network, and written by the great Marti Noxon (“Buffy the Vampire Slayer”) from the book by Gillian Flynn (“Gone Girl”), “Sharp Objects” is a murder mystery at its center, but it’s also a story about recovery, trauma, and cycles of abuse. It’s about people so damaged that they don’t really know how to be any other way, and so they perpetuate cycles of pain just to keep feeling. Beautifully constructed by Vallée and Noxon, and unforgettably performed by an ensemble that seems destined for awards ceremony stages in the near future, this is a worthy follower to “The Night Of” and “Big Little Lies” in this new trend of HBO Mini-Series Obsessions.

One of the best actresses of her generation, Amy Adams, plays Camille Preaker, a crime reporter from St. Louis who has been assigned what could be the story of her life. Knowing that her family is from the small town of Wind Gap, Missouri, her editor sends Camille down there when a young girl goes missing. It’s not just the new case but that another girl was found dead less than a year ago, all of her teeth removed before they found her body. Could there be a serial killer in Wind Gap?

To say Camille brings some baggage home to investigate the missing girls would be an understatement. She’s not long removed from a stint in a rehab center and she’s still a raging alcoholic. She replaces the H2O in her water bottles with vodka and starts most days with a swig of something alcoholic. She also has a legacy of cutting, the scars of words like “Scared” and “Vanish” etched into her skin forever. Early episodes imply that her kindly editor actually sends Camille to Wind Gap because he knows there are some demons she needs to face before she can be whole again.

Actually, it’s really one main demon named Adora, played with icy calculation by Patricia Clarkson. Adora is the kind of Southern Dame who makes everything about herself. She’s passive-aggressive only when she’s being polite. Most of the time, she’s aggressive-aggressive. Camille’s arrival in Wind Gap is an annoyance, in no small part because she considers Camille writing a story about the town’s tragedy to be in poor taste. Adora’s life is a series of routines and manners. Anything that interrupts her life of amaretto sours and social outings is not just a problem but an all-out tragedy. She strikes out verbally and emotionally at Camille any chance she gets, and the balance between Clarkson and Adams is stunning. Abusive mothers have a long legacy in film and TV, but rarely have they come across so believably. It’s easy to see why someone would come out of Adora’s house damaged, and why that person returning to Adora’s house would barely be able to keep it together.

Complicating matters is that there’s a young lady in Adora’s house right now in the form of Camille’s young half-sister Amma (Eliza Scanlen). Not only does Amma remind Camille of her younger self but she also brings up ghosts of Camille’s dead sister Marian. Death lingers in every room of this house. In fact, every place in Wind Gap feels a little haunted. Even the public parks have the echoes of past crimes and traumatic memories. And Amma is trying to be a teenager in this gothic landscape. At home, with Adora, she acts younger than her age, dressing up like a little girl and playing with dollhouses. Outside the house, she drinks and flirts with older boys. She’s a terror. And she’s really essential to the narrative of “Sharp Objects”. She is potential victim & abuser and child & adult in one confused body. She is both Camille, the girl who got away, and Marian, the girl who did not, at the same time.

Noxon and Vallée beef up some of the supporting roles from Flynn’s book, especially that of a Kansas City detective investigating the case named Richard (Chris Messina). He’s something of a safe haven for Camille, someone who also wants to get to the bottom of the case and get the hell out of Wind Gap. A relationship forms, and Messina and Adams have solid chemistry, but I almost wish that the show had stuck with the forced perspective of Camille instead of branching out of it. The book gains power by keeping us stuck with her as her trauma comes to the surface and she learns the secrets of both her family and the town of Wind Gap. Luckily, that throughline remains in the adaptation, which is as smart as TV gets in 2018, even if I think it could have accomplished what it does in an episode or two less. It starts off strongly, but, like so much TV in the modern era, sags a bit in the middle of the season.

Most people won’t notice the slight drag because they’ll be entranced by the performances and engaged by the mystery. Adams and Clarkson will get a lot of attention, and they’ll deserve it, but take a look at the way “Sharp Objects” is built because that’s where it garners most of its strength. It’s in the editing, and the languid cinematography that ties together past and present into one haunting scene. Vallée will cut glimpses of Camille’s past into her investigation in a way that feels genuine and pure—the way images flash back to us when we revisit a place we haven’t been since childhood. In a sense, especially when we go home again, we are all haunted. Camille Preaker is just more haunted than most. 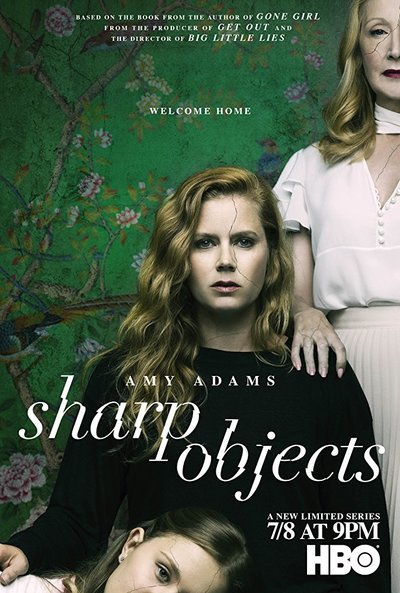