James Cameron wants you to believe. He wants you to believe that aliens are killing machines, humanity can defeat time-traveling cyborgs, and a film can transport you to a significant historical disaster. In many ways, the planet of Pandora in "Avatar" has become his most ambitious manner of sharing this belief in the power of cinema. Can you leave everything in your life behind and experience a film in a way that's become increasingly difficult in an era of so much distraction? As technology has advanced, Cameron has pushed the limits of his power of belief even further, playing with 3D, High Frame Rate, and other toys that weren't available when he started his career. But one of the many things that is so fascinating about "Avatar: The Way of Water" is how that belief manifests itself in themes he's explored so often before. This wildly entertaining film isn't a retread of "Avatar," but a film in which fans can pick out thematic and even visual elements of "Titanic," "Aliens," "The Abyss," and "The Terminator" films. It's as if Cameron has moved to Pandora forever and brought everything he cares about. (He's also clearly never leaving.) Cameron invites viewers into this fully realized world with so many striking images and phenomenally rendered action scenes that everything else fades away.

Maybe not right away. "Avatar: The Way of Water" struggles to find its footing at first, throwing viewers back into the world of Pandora in a narratively clunky way. One can tell that Cameron really cares most about the world-building mid-section of this film, which is one of his greatest accomplishments, so he rushes through some of the set-ups to get to the good stuff. Before then, we catch up with Jake Sully (Sam Worthington), a human who is now a full-time Na'vi and partners with Neytiri (Zoe Saldana), with whom he has started a family. They have two sons—Neteyam (Jamie Flatters) and Lo'ak (Britain Dalton)—and a daughter named Tuk (Trinity Jo-Li Bliss), and they are guardians of Kiri (Sigourney Weaver), the offspring of Weaver's character from the first film.

Family bliss is fractured when the 'sky people' return, including an avatar Na'vi version of one Colonel Miles Quaritch (Stephen Lang), who has come to finish what he started, including vengeance on Jake for the death of his human form. He comes back with a group of former-human-now-Na'vi soldiers who are the film's main antagonists, but not the only ones. "Avatar: The Way of Water" once again casts the military, planet-destroying humans of this universe as its truest villains, but the villains' motives are sometimes a bit hazy. Around halfway through, I realized it's not very clear why Quaritch is so intent on hunting Jake and his family, other than the plot needs it, and Lang is good at playing mad.

The bulk of "Avatar: The Way of Water" hinges on the same question Sarah Connor asks in the "Terminator" movies—fight or flight for family? Do you run and hide from the powerful enemy to try and stay safe or turn and fight the oppressive evil? At first, Jake takes the former option, leading them to another part of Pandora, where the film opens up via one of Cameron's longtime obsessions: H2O. The aerial acrobatics of the first film are supplanted by underwater ones in a region run by Tonowari (Cliff Curtis), the leader of a clan called the Metkayina. Himself a family man—his wife is played by Kate Winslet—Tonowari is worried about the danger the new Na'vi visitors could bring but can't turn them away. Again, Cameron plays with moral questions about responsibility in the face of a powerful evil, something that recurs in a group of commercial poachers from Earth. They dare to hunt sacred water animals in stunning sequences during which you have to remind yourself that none of what you're watching is real.

The film's midsection shifts its focus away from Sully/Quaritch to the region's children as Jake's boys learn the ways of the water clan. Finally, the world of "Avatar" feels like it's expanding in ways the first film didn't. Whereas that film was more focused on a single story, Cameron ties together multiple ones here in a far more ambitious and ultimately rewarding fashion. While some of the ideas and plot developments—like the connection of Kiri to Pandora or the arc of a new character named Spider (Jack Champion)—are mostly table-setting for future films, the entire project is made richer by creating a larger canvas for its storytelling. While one could argue that there needs to be a stronger protagonist/antagonist line through a film that discards both Jake & Quaritch for long periods, I would counter that those terms are intentionally vague here. The protagonist is the entire family and even the planet on which they live, and the antagonist is everything trying to destroy the natural world and the beings that are so connected to it.

Viewers should be warned that Cameron's ear for dialogue hasn't improved—there are a few lines that will earn unintentional laughter—but there's almost something charming about his approach to character, one that weds old-fashioned storytelling to breakthrough technology. Massive blockbusters often clutter their worlds with unnecessary mythologies or backstories, whereas Cameron does just enough to ensure this impossible world stays relatable. His deeper themes of environmentalism and colonization could be understandably too shallow for some viewers—and the way he co-opts elements of Indigenous culture could be considered problematic—and I wouldn't argue against that. But if a family uses this as a starting point for conversations about those themes then it's more of a net positive than most blockbusters that provide no food for thought.

There has been so much conversation about the cultural impact of "Avatar" recently, as superheroes dominated the last decade of pop culture in a way that allowed people to forget the Na'vi. Watching "Avatar: The Way of Water," I was reminded of how impersonal the Hollywood machine has become over the last few decades and how often the blockbusters that truly make an impact on the form have displayed the personal touch of their creator. Think of how the biggest and best films of George Lucas and Steven Spielberg couldn't have been made by anyone else. "Avatar: The Way of Water" is a James Cameron blockbuster, through and through. And I still believe in him.

Available only in theaters on December 16th. 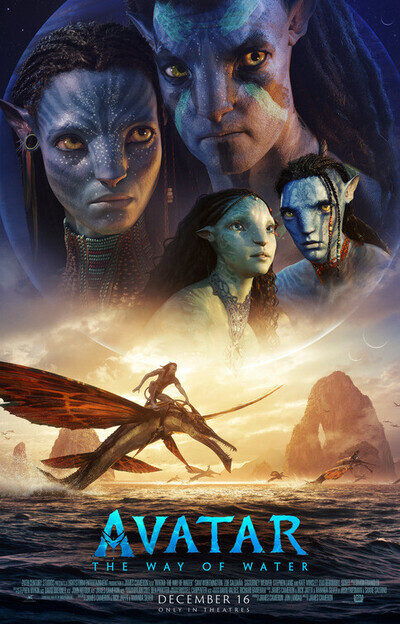 Rated PG-13 for sequences of strong violence and intense action, partial nudity and some strong language.