It’s a shock to see this raven-haired go-getter so full of life, so full of possibilities and so full of herself at such an early age. There she is in grainy home-video footage with her female chums with a smattering of adolescent acne on her fresh face, innocently sucking on a lollipop and throatily belting out the sing-song refrain of “Happy Birthday” as if she were possessed by the spirit of an ancient R&B diva.

This is the Amy Winehouse few of us ever got to witness, radiating cheeky self-confidence and finding joy in sharing her considerable gifts. The one who existed before the brutally invasive flash-flash-flash of the paparazzi’s omnipresent cameras eventually snuffed out the very flame that once burned so bright inside of her.

What most of us do know of Winehouse, a throwback to the great jazz songstresses of yore who was also informed by hip-hop, reggae, girl-group pop and soul, is that this North London-born chanteuse burst onto the scene like a supernova and burned up the charts with her 2006 breakthrough album “Back to Black,” selling over 20 million copies and winning five Grammys. For a time, her catchy signature tune, the all-too-appropriate “Rehab,” was inescapable and helped shape her coquettish bad-girl persona.

And, almost as quickly, she succumbed to the ultimate showbiz cliché, dying from accidental alcohol poisoning in 2011. Thus, Winehouse became a charter member of the “27 Club,” which refers to the age of such music legends as Brian Jones, Jimi Hendrix, Janis Joplin and Jim Morrison when they reached their own much-too-early expiration dates.

Winehouse seemingly had the vocal goods to have gone down in history as one of the all-time greats based on what is on display in “Amy,” a highly absorbing, sensitively told and ultimately devastating documentary directed by Asif Kapadia (“Senna”). Whether she was busily scribbling her sexually-charged confessional lyrics in her girlish curlicue handwriting or wailing away at maximum strength minus a backing track in a recording studio with note-perfect pizzazz, Winehouse is revealed to be a natural-born entertainer with a raw sound and street style that borrowed from the past – a sultry Sarah Vaughan at the intersection of bee-hived Ronnie Spector and fragile Edith Piaf – while being her own person and true to herself as an artist.

But, as the film also makes all too clear, Winehouse was cursed with an array of dysfunctional traits that would inevitably combust into an inferno of public self-destruction. Many of the danger signs were there even before the incendiary element of celebrityhood arrived on the scene: An addictive personality, an often-maddening passive-aggressive nature, an unhealthy appetite for drugs and alcohol, a passion for reckless partying, a weakness for manipulative men, daddy issues that dated from her parents’ break-up when she was a child, lifelong struggles with depression, bulimia and self-doubt.

Yes, the heady steady climb to success followed by a dizzying downward spiral is a staple of cautionary showbiz sagas. And the growing abundance of music-related documentaries following the Oscar wins for “20 Feet From Stardom” and “Searching for Sugar Man” is not abating. This year has already brought a well-received documentary, “Kurt Cobain: Montage of Heck,” about the Nirvana front man, a fellow member of the 27 Club and whose own struggles in the limelight closely parallel Winehouse’s.

But what sets “Amy” apart from similar train-wreck bio-docs aren’t necessarily any new revelations. After all, her song lyrics – which Kapadia smartly employs as captions onscreen to draw out their power – pretty much unveil the heart of the tale all on their own. Instead, what stands out is the almost overwhelming sense of voyeuristic intimacy achieved by a vast array of archival clips, many unseen before and some shot by Winehouse herself, accompanied by vividly candid current-day audio commentary by those who knew her best. Sometimes, it feels as if we are eavesdropping on day-to-day conversations rather than just hearing the usual litany of platitudes and regrets.

With more than 100 subjects interviewed by Kapadia and his team, ranging from invaluable childhood chums like Juliette Ashby and first manager Nick Shymansky (a sweet guy who I am guessing harbored a unrequited crush for Winehouse) to professional collaborators such as rapper Yasiin Bey (aka Mos Def) and producer Salaam Remi, “Amy” could not feel more personal unless the director had included X-rays of Winehouse in the mix.

Every rise-and-fall story has its share of villains. That role in “Amy” is primarily played by her father, Mitch, who would introduce her to the retro tunes crooned by Frank Sinatra and other jazz greats that influenced her. But, more often, the onetime cab driver comes off as a leech who basked in his daughter’s glory (an incident while she rested post-rehab on Saint Lucia in 2009 and he brought along his own camera crew when he visited her especially stands out) with only minimal concern for her well-being. It’s no surprise that he has disassociated himself from this project. Meanwhile, mom Janis is on camera saying how, when her teen daughter revealed that her dieting regimen consisted of binging and purging, she just shrugged it off with little concern.

Public enemy No. 1, however, is the rather slimy jailbird reprobate who was her husband for several years, Blake Fielder-Civil. He got her hooked on heroin and crack cocaine, and kept her that way in order to ensure that his meal ticket was dependent on him. The footage of the ravaged pair after an altercation – she with her trademark eyeliner smeared all over now-gaunt face, he with blood dripping down his face – seems to suggest they were the hipster answer to Sid and Nancy. On the upside, their on-and-off toxic romance formed the backbone for most of the songs found on “Back to Black.”

However, it is duly observed that Winehouse also played a major part in sealing her tragic fate, especially after appointing her concert promoter Raye Cosbert as her manager while on the verge of global stardom. The point is made by one interview subject that a promoter is primarily interested in keeping a client constantly on the road, since tours are his main source of income. Which is likely why, instead of allowing Winehouse to take a break and get her act together, she was regularly forced to do live concerts while clearly emotionally ill-equipped to do so. The result is well-illustrated in the film, with the out-of-it singer simply refusing to perform at a 2011 show in Belgrade, the first stop of an eventually cancelled European tour, to a chorus of boos and cat-calls. A month later, she would be gone.

Thankfully, “Amy” ends on a high note, with one of her idols, Tony Bennett, eulogizing Winehouse by placing her among the ranks of Dinah Washington, Billie Holliday and Aretha Franklin. The veteran should know better than most, judging by his wonderfully gentle handling of Winehouse in earlier behind-the-scenes footage of the two of them recording the jazz standard “Body and Soul” at Abbey Road for his Duets II album. When a nervous Winehouse falters at first and haltingly asks for a do-over, the octogenarian flashes a grandfatherly smile and says, “Don’t worry, it always takes me a while to warm up, too.” And warm up she does, for what pours forth out of her mouth confirms that Winehouse was the real deal. 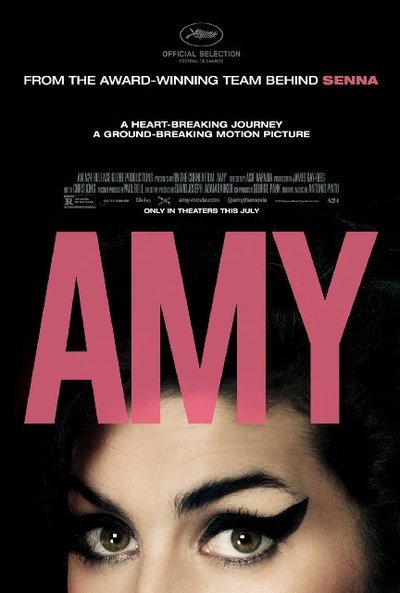 Amy Winehouse as Herself