One way you can tell that the shock of 9/11 is fading: somebody makes a meet-cute road movie about it.

That's a slightly unfair description, maybe, considering how poker-faced sincere writer-director David Heinz's "American Folk" is. But if there was a good movie in here—and I bet there was—it got buried the minute Heinz decided to build it around a couple of attractive but rather generic young white folks, just like the ones that populate ninety percent of romantic comedies made in this country, including the indie movie versions; and then give them no discernible personalities to display as they travel from Los Angeles to New York City in a classic Volkswagen van of the type that free spirited American movie characters always drive, interacting with supporting characters who represent patchwork squares on the great American quilt, etc., etc., America, America.

The movie starts with Elliott (Joe Purdy), a faintly Brad Pitt-ish guitarist with a big, woolly beard, strumming his instument in a motel room and being ordered to shut up by somebody on the other side of the wall. The next day he boards a plane headed to New York, where he and his medium-popular band have a gig in a few days, and finds himself seated next to an attractive young woman about his age named Joni (Amber Rubarth), who's going to New York to relieve her ailing mother's adult caregiver.

The plane is forced to turn around and land as a result of the attacks, and they take a cab out together, then stay with a friend of Amber's (Krisha Fairchild of "Krisha") who loans them her van. The couple then strikes out East, more or less, meeting all sorts of fine American types as they drive, including an intense Vietnam veteran played by David Fine and a lesbian couple (Miranda Hill and Emma Thatcher) who are hitchhiking to go visit family. From there, the film hits a lot of the expected traveling-rom-com beats, including the first big fight and reconciliation on a dusty desert road, the moment when the duo goes to the motel room they just rented and realizes there's only one bed, and the moment when they both realize that the problems of two little people don't amount to a hill of beans in this crazy world. As the story unfolds, we periodically hear news reports playing (usually muffled) in the background or on the van's radio.

Maybe I'm too close that day, still, but the periodic reappearance of these reports, as well as the main characters' very rare conversations about the attacks, made me distrust as well as dislike the movie. In the immediate aftermath of 9/11, it's all people were talking about—at least for the first four days after the attacks, roughly the period covered here. Wherever you went, people seemed wired, fearful, alert. They were talking about the state of the world as many of them rarely had. It was raw stuff. Now imagine that this same film had been set in the four days after the attack on Pearl Harbor that drew the U.S. into war with the Axis powers, then ask if it's believable that a couple traveling from coast to coast would encounter the subject in such a roundabout or marginal way, even in the age of radio-only, with long sections where they're mainly wondering if they're going to have a good relationship with the person they unexpectedly had to share a van with. (She sings, too, by the way—and she's really good!)

There are a few thoughtful bits, notably the section with the Veteran, which is so powerful (thanks in large part to Fine's performance) that it suggests a far greater film than the one we're watching. In fact, the film with Fine at the center is the one I'd rather be watching. But then, I'd rather be watching the film about the lesbian couple, too, or with most of the people that the main couple meets for a couple of minutes. When every person a film's main characters meet are more interesting than they are, it has a core problem that no amount of thoughtful cinematography or soundtrack curation can solve.

Far worse is the lingering suspicion that the movie doesn't know what it wants to say about 9/11 besides, "Hey, we all have certain things in common — like music for example—so let's all try to look past our differences and be kinder to each other." That's an observation so trite that it shouldn't have been yoked to a film that takes place against the background of a series of attacks that killed approximately 3,000 people. The victims died of smoke inhalation, were burned alive, or got crushed to death when the Towers collapsed. Hundreds of thousands of their friends and family members were bereft. The attacks changed the course of history in too many ways to list here. It's hard to care whether Elliott makes his gig once you've thought about all that — and the fate of Joni's mother may prompt you to imagine what it's like to be an ill shut-in in New York City in the days following the 9/11 attacks, and how much more interesting that film, too, would've been.

The "Well, looky here at this great, big, wonderful, weird country of ours!" movie is a viable subgenre, but one that's hard to get right. A Robert Altman, or even a Richard Linklater, might've brought more depth of feeling and thought to a subject that requires artistic and intellectual rigor to avoid coming off as crass (it's hard to imagine either of them going with this particular concept and not seriously altering it). The American flags and flag insignias strewn throughout are doing little more than saying, "Yeah, the flag, patriotism, it's complicated."

There are moments and images that hit just the right quasi-mysterious pitch, such as the shot through the taxi window as Elliott and Joni are leaving the airport that frames a person's hand fruitlessly waving to convince them to stop and take one more passenger. But they're rare. Despite a few good scenes and ideas, and a final ten minutes that will be affecting for anyone who lived through the aftermath of the attacks on New York, the end product often feels like a standard-issue high concept romantic comedy with scaffolding of 9/11 solemnity built around it. It's easy to imagine the same movie being made, minus 9/11, in about 1998 or so, probably starring Reese Witherspoon and Matthew McConaughey, with Ellen Burstyn as the hippie who loans them the van, and maybe Scott Glenn as the Vietnam veteran.

It gives me no pleasure to trash a movie this small, made with such evident sincerity. But the whole thing was a bad idea that only genius could've rescued. Maybe not even then. 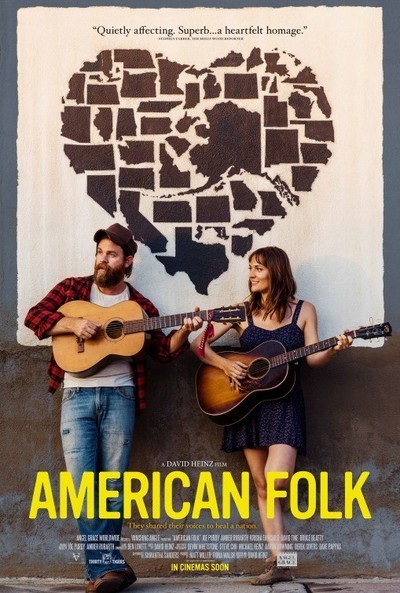