Ruby (Jamie Chung), a Chinese-American new to Hong Kong, stands outside a bar attempting to track down her friends. She has no idea where she is. A guy overhears her and steps in to help. This is Josh (Bryan Greenberg), who has lived in Hong Kong for 10 years. He's "in finance." He knows his way around and speaks Cantonese. After momentary hesitation on her part, the two of them set out into the neon-gleam glamour of Hong Kong on a night-long "walk and talk." Their bantering conversation has all the markings of a successful (albeit accidental) first date, punctuated by sight-seeing. The formula of "Already Tomorrow in Hong Kong," written, directed, and produced by Emily Ting (her first feature) is one that has worked before.

But the film lacks the underlying subtext that grounded similar hopeful-yet-doomed-romance stories in the past. The dialogue, charmingly delivered by the two leads, remains on a surface jokey level. The stakes are not high enough for either character and the two-people-at-a-fork-in-the-road story never comes to life, a practically fatal flaw. The essential element that such stories must achieve is the knowledge that the two characters need to be together. An audience must ache for the characters to break through to deeper intimacy with one another.

As Josh walks Ruby to her destination, they get to know each other and he shows her the sights. Josh expresses dissatisfaction with his finance job and wants to quit and be a novelist. (Of course he does.) Ruby, who barely knows him, launches into an inspirational speech about taking chances. He appears blown away by her banal insight. It's hard to believe he has never heard such a thing before. But it sets up the too-easy idea that his "brief encounter" with Ruby changes the course of his life. Ruby, too, a toy-designer, has unrealized dreams.

These are familiar devices and they can work. Ruby and Josh are so financially fortunate (no crime in that, they both work hard) it has softened them, made them lazy, complacent. Ruby barely notices Hong Kong, and complains about the lack of Netflix and the fact that it is impossible to get good Mexican food. Josh knows the cool non-tourist places to go, but has no perspective on his circumstances outside of the fact that, to Los Angelenos, it's "already tomorrow in Hong Kong." Ruby and Josh, then, seem un-curious, and un-engaged with their own lives. It's hard to invest in two people who have so readily taken the easy way out.

Ruby and Josh both have off-screen partners who make their presence known through phone messages or Outlook reminders of an upcoming Skype call. Their emotions towards their respective partners are ambivalent at best, and the problem with that is that the two come off as people looking for an excuse to cheat as opposed to a situation much more unstable and important. You know a "romance" film isn't working when you think in exasperation, "Oh, go ahead, just cheat if your relationship bores you so much. No one'll know." Or: "Break up with your partner. For God's sake, you're not married. No harm no foul." It's not the most romantic vibe.

Cinematographer Josh Silfen provides a welcome variety of angles to all the talk, the camera sometimes following the two from behind, or swinging around to move along ahead of them. Silfen also shows a visual sensitivity to the lights of Hong Kong: they blur and twinkle in the background/foreground, creating a dreamy atmosphere. It's a poetic style that serves a purpose: despite the attention-getting surroundings, the focus is on the one-on-one interaction of Ruby and Josh.

The style keeps "Already Tomorrow in Hong Kong" from being a glorified travelogue, but unfortunately it also hones in on the lack of chemistry between the two leads. Both Greenberg and Chung were executive producers on the film. Both are obviously talented. Greenberg is effortlessly charming in a very real-guy kind of way. And Chung manages the switch-backs of mood and energy with ease. But Josh and Ruby "bond" during a conventional shopping montage, where they haggle over the price of a selfie stick, and an awkward scene where they get their fortunes told. Think of River Phoenix and Lili Taylor in "Dogfight," which has a similar "sightseeing" structure, or Ethan Hawke and Julie Delpy in "Before Sunrise" paying the guy lying by the river to write a poem for them, and the difference is palpable. What is missing is the magic of connection.

"Already Tomorrow in Hong Kong" is in the long tradition of extended "meet-cutes," films like Vincente Minnelli's "The Clock," David Lean's "Brief Encounter," Nancy Savoca's "Dogfight" and Richard Linklater's "Before" trilogy. There are elements of cultural disorientation too, reminiscent of Sofia Coppola's "Lost in Translation." It is clear that Ting knows the "bucket" in which she wants to place her story, and the mood of self-control and bittersweet longing she wants to create. There are moments, brief moments, when that tone is achieved, but overall Ruby and Josh's connection has more in common with the feather-weight "relationship" of Meryl Streep and Robert DeNiro in "Falling in Love" than the torment of "Brief Encounter" or the urgency of "The Clock." If nothing else, "Already Tomorrow in Hong Kong" is an object lesson in just how difficult it is to make a film successful with this story-structure. It reminds us what a miracle "The Clock" or "Before Sunrise" were, the stories shimmering with delicacy and inference, in-depth conversations leading to connections more intellectual than sexual, masterpieces of barely-controlled passion and longing. "Already Tomorrow in Hong Kong" suffers in comparison. 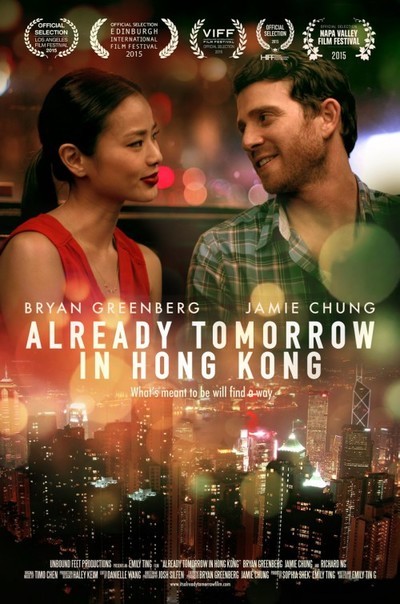