`Dogfight" isn't a love story so much as a story about how a young woman helps a confused teenage boy to discover his own better nature. The fact that his discoveries take place on the night before he ships out to fight the war in Vietnam only makes the story more poignant.

The film takes place in San Francisco, in 1963, a few weeks before the Kennedy assassination. River Phoenix plays Birdlace, a young Marine who has been given a final night’s shore liberty with his friends from boot camp. They decide to hold a "dogfight," a particularly cruel contest in which they pool their money, rent a bar, and have a competition to see who can find the ugliest date. The Marine with the best "dog" wins the cash.

Phoenix finally settles on Rose (Lili Taylor) in desperation. She isn't very ugly (and indeed, in the tradition of such characters, she grows more lovely as the night wears on), but she’s the best he can do. Rose is a vulnerable, poetic young girl who listens to Joan Baez records and writes poetry and has a sensitive nature. She agrees to go out with Birdlace mostly because she feels sorry for him.

Then she finds out about the dogfight, and in a scene of enormous power she attacks the young man - not for what he has done to her, but for what they have all done to their other victims. Then she walks out. But he follows her home, apologizes awkwardly, and they begin a conversation that leads to an evening on the town. They even have dinner in a nice restaurant, snubbing the headwaiter who tries to snub them.

To fully appreciate "Dogfight," it helps to see it as the record of a particular time. In November 1963, John Kennedy was still president, "Vietnam" was not yet a familiar word, hair was short, and the counterculture was still idealistic and tentative - more concerned with realization than revolution. And also, more in 1963 than today, male bonding sometimes consisted of the real or imaginary humiliation of women.

That, I think, is why Rose even considers still talking to Birdlace after she finds out about the dogfight. Some viewers of the film question her forgiveness of him; I think that, in 1963, she might have been more flexible than a woman of subsequent years could possibly have been.

What does happen between Rose and Birdlace is a long night of great tenderness and poignancy, directed by Nancy Savoca from Bob Comfort’s screenplay with great care and love. (Savoca’s previous film was "True Love," in 1989, the story of a couple getting married in the midst of confusion, doubt, and almost universally mistaken motives.) Maybe you have to be a little idealistic to even enjoy this movie - to understand what it means to her, to play her folk records and sit in her room and feel poetic and lonely.

River Phoenix and Lili Taylor are well cast here. Taylor (who played the girl who composed her own songs in "Say Anything," and was also in "Mystic Pizza" and the wonderful sleeper "Bright Angel") has a solemn face, a serious smile, and a stillness that reads as sympathy. Phoenix, who sometimes plays rebels and misfits, here plays a kid who wants only to conform, and finds to his surprise he is just a little too good to do that.

I wonder if you will like the final scene in "Dogfight." Some people have found it tacked on. I feel the movie needs it - grows because of it. I won't reveal what happens. I will say it is handled with great delicacy, that the buildup is just right, and that Savoca and Comfort were right to realize that, in the final moments, nothing needs to be explained. 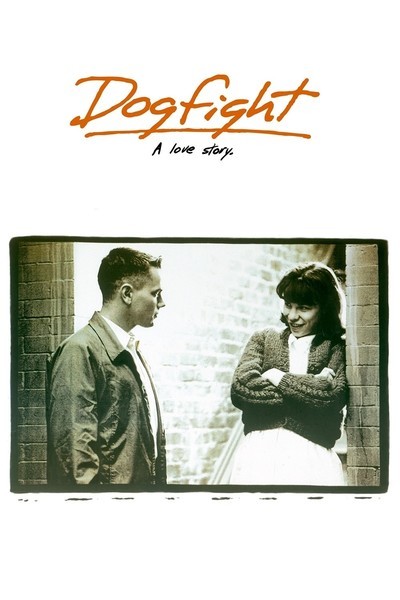 Holly Near as Rose Sr.