“Alphabet City” is the first teenage gangster movie. We’ve had movies before where the kids were gangsters, but this is the first movie where they’ve taken all the clichés from those black-and-white Warner Brothers gangster classics of the 1930s, and crossed them with punk, angst, and James Dean. The result is one of the silliest movies of the year.

The movie’s about Johnny, a 19-year-old kid who is, we learn from the movie’s publicity releases, the “King of Alphabet City.” That’s the Lower East Side of Manhattan, where the avenues are named after letters, and every street corner has a drive-in drug dealer.

Johnny is some cool guy. He is a collector for the mob. He torches buildings – even the one his family lives in. He intimidates the owners of nightclubs where he is too young to be served. He keeps his lieutenants in line. He’s so busy, it’s not until halfway through the movie that we learn, almost as an afterthought, that he has a wife and baby. His wife is an artist with a loft in SoHo. Sure. Life has been filled with accomplishment for young Johnny, although his greatest accomplishment – growing up in Alphabet City and becoming a drug dealer without personally developing a habit – is probably the hardest one to believe.

We’ve seen movies set on these streets before. In Martin Scorsese’s “Mean Streets,” Harvey Keitel played the Italian-American kid who was the collector for the mob. But Scorsese knew Little Italy; he grew up there. He knew that Keitel’s character should be guilt-ridden, incompetent, and scared witless. The last thing we can believe is Johnny as the king of streets that not even real gangsters feel safe walking down.

No matter. This isn’t social realism; it’s an impressionistic fantasy, directed by Amos Poe, who once made an underground film named “Subway Riders” that did a wonderful job of evoking the loneliness and terror of the streets. In “Alpha­bet City,” he makes the whole city into a set design, bathing the night streets in lurid neon colors and allowing his characters to throw shadows that are three stories high. Fine, except that John­ny, the inhabitant of this Edward Hopper world, somehow loses his way about halfway through and wanders into a routinely-plotted exploitation film. There’s a scene where the Mafia comes gunning for him, and Johnny has to try to save his wife and child. There’s a shootout in an elevator, a quick getaway, and an absolutely, howlingly unbelievable climax in which a guy on a motorcycle rides to the rescue in the nick of time.

Johnny is played by Vincent Spano, who is a good actor, even in this movie (you may remember him from “Rumble Fish” and “Baby, It’s You”). There are other interesting performances: Michael Winslow as the luded-out street dealer who is Johnny’s friend, and Zohra Lampert as Johnny’s weary mother, doing the ironing while her latest slob of a lover snores on the sofa. Maybe in another movie these actors could have made their characters come alive. In “Alphabet City,” everything is smothered in the concept. 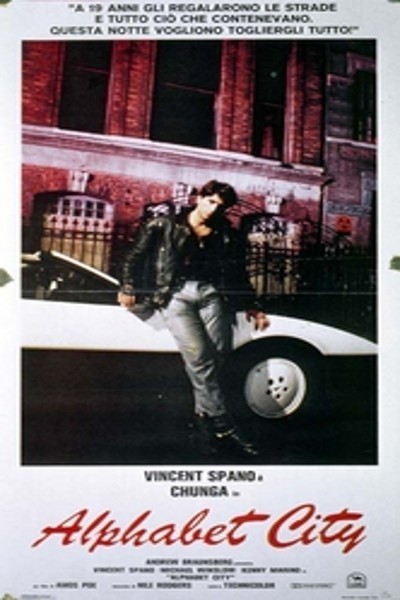