This film, directed by Edward Berger from a script he wrote with Lesley Paterson and Ian Stokell, is the first German-made version of Erich Maria Remarque’s famed novel about World War I, written in German and published in 1928. The first film adaptation of the book, released in 1930, was American, directed by Lewis Milestone, and kind of a landmark of early American sound filmmaking. It was well received and considered so powerful that it was thought a potential deterrent to future war. That turned out to be erroneous. (And Remarque himself contended that he had not intended to write a pacifist testament so much as to plainly depict the agony of the young recruit at war.)

A second version, in 1979, directed by Delbert Mann (a “dreary” director, per Andrew Sarris) and starring Richard Thomas, then famous for his portrayal of saintly earnest John Boy Walton on “The Waltons,” didn’t have close to the same impact. Nor, I suspect, will this rendering (and I do mean “rendering” in more than one sense) of the story, which nonetheless is Germany's official film submission to the Academy Awards this year.

At two and a half hours, it’s as long as the 1930 version, but packed with quite a bit more plot. It jettisons the early scenes in the novel and film in which young German students are goaded by an ardent super-patriot professor into joining the military and saving the fatherland. Instead, this film sets its sights on the head-spinning carnage of warfare by showing how young enlistee Paul Bäumer (Felix Kammerer) gets his wrong-sized uniform: the clothing has been recycled off of a corpse.

Like “1917” before it, and like the better films that continue to inspire a concentratedly grisly mode of war picture (the epochal Russian film “Come and See” is explicitly referenced at least once, as is the more recent, and more problematic, “The Painted Bird”), “All Quiet on the Western Front" is state-of-the-art in shoving your nose in realistic-seeming carnage and possibly inducing hearing damage in laying on the ear-splitting aural experience of a fire-fight. The in-the-trenches tracking shots that Stanley Kubrick crafted for “Paths of Glory” (a movie that culminated in a point that actually made sense, unlike this muddle) are now steady hand-held digital panoramas of exposed viscera and agonized writhing. Filmmakers have arguably lost the plot, turning “War is hell” into a “Can you top this?” competition.

Within all the action, the narrative of young Bäumer making his way, learning what it is to kill, and trying to forge fellowship in his untenable situation plods along. Berger adds some material too. There’s a parallel storyline in which real-life German vice-chancellor Matthias Erzberger tries to broker a peace with the French and others. This is not present in Remarque’s book. So why’s it here? I reckon several reasons: first, to demonstrate that in the Great War, there really WERE some “good Germans,” which when you think about it is neither here nor there in this scheme, as the reader/viewer is meant to at least have some empathy for Paul, who is after all a German soldier. And the intransigence of some of the French delegates in these scenes will bring to mind the years-long humiliation Germany was subjected to by the Armistice agreement, which helped bring about the rise of Hitler. The Erzberger narrative is also intended, one supposes, to build suspense: will the Armistice go into effect before the worst can happen to the characters we’ve come to care about? (Presuming one has indeed come to care about them, which was not my own experience here.)

But this is not the only special pleading the director puts forth. Late in the film there’s a sequence when Paul and his older army friend Katczinsky (Albrecht Schuch) go to steal a goose (to eat, not to adopt as a pet or anything) from a French farm and run afoul of a dead-eyed French boy. I won’t “spoil” the sequence. But I will say that, apart from committing the cinematic sacrilege of using the same Bach choral prelude that Tarkovsky put in his “Solaris,” it is very invested in villainizing French farm boys. To which I can only ask, well, what were the Germans even doing in France at that time anyway?

Ultimately, I found this kind of whataboutism more amusing than disquieting. Maybe I’m just whistling in the dark. 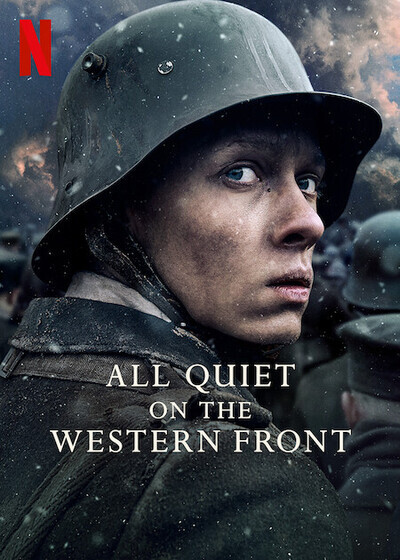