Jerzy Kosinski’s 1965 novel The Painted Bird was controversial in many respects. At first, the controversy centered on the content, an unrelenting story of the sufferings of a young boy wandering the blasted landscape of World-War-II-riven Central Europe. Then the controversy centered on whether Kosinski plagiarized, lifted the experiences of friends who had suffered, and so on. The novelist, a Polish refugee whose major works (Being There, adapted into a classic picture by Hal Ashby, Peter Sellers and others in 1979, among them) were written in English, remains a vexed figure.

This adaptation of the novel, directed by Czech actor/filmmaker Václav Marhoul, is impressive on a number of levels … most of them technical. The movie was clearly a massive and difficult undertaking, and on the levels of cinematography (Vladimir Smutny did the honors here) and film language, Marhoul and company almost never put a foot wrong. It’s in trying to locate the—for lack of a better term—heart of the movie where problems emerge.

Each section of the tale is named for the person under whose care, or perhaps the better word, we’ll see, is scrutiny, the nameless-through-much-of-the-movie protagonist, falls. (The revelation of that name is one of the pictures genuinely moving moments so I won’t give it away.) At the beginning, he’s in a cottage with an old woman named Marta, with whom he shares a relationship of some equanimity, it seems. One night he finds her sitting up in a chair, dead, and before you can say, “Hey kid, don’t drop that oil lamp you’ll burn down the cottage,” the kid drops the oil lamp and burns down the cottage.

The fellow is then bought, as a slave, by Olga, who confirms for the villagers that he’s no good and possessed by Satan. Were it not for the early appearance of a German airplane overhead, one might think this takes place in medieval times; once some male character show up wearing suspenders, you might think, “Okay, 19th century.” These Central European villages are archaic in a lot of ways.

So, Olga buries the kid up to his neck and lets crows peck at him as a way of curing an illness. He escapes from her and winds up at the home of a miller, played by Udo Kier, who’s convinced his wife is having an affair with his stablemaster. One night at dinner, driven mad by the sounds of cats mating, the miller gouges out the eyes of the stablemaster, and of course there’s then a floor-level shot of the cats nipping at the orbs.

There’s no relief from the suffering, really. The kid meets a kind man who he sees having sex with the local earth mother, who is later raped with a water bottle by the village crones. Found by a local priest, he’s delivered to the local child molester. Taken under the wing of the Red Army, he gets what seem to be some moments of respite for him. There’s a lyrical scene of him resting on a treetop in the early spring with Miska, and just being. But this is a false idyll. The whole reason they’re in the tree in the first place is because Miska is a sniper, and he’s up there picking off villagers—including a child—with his rifle. “An eye for an eye,” Miska tells the kid. Well okay.

I’ve seen this movie described as a “portrayal of Nazi Germany,” but in fact German soldiers themselves, while eventually present, do not figure at all prominently. And none of the film takes place in Germany. Very little of the evil done to the kid has anything to do with Germans or Nazis. The movie doesn’t make any kind of causal connection to the invasion and occupation of these territories by the Third Reich. Indeed, director Marhoul consciously had the characters speak in a hybrid language known as Interslavic to prevent viewers from associating the various degenerates and their actions depicted here with any specific nation. Nor does the film make any overt exploration of how the deprived circumstances of the abusive peasants might have anything to do with their behavior.

The movie has one of the damnedest “all-star” casts that has been seen in a while, and Marhoul, to his credit, integrates them well enough into the narrative that you’re not likely, or too likely, to become jarred and exclaim, “Hey, it’s Stellan Skarsgård/Harvey Keitel/Barry Pepper.” But the movie belongs to child actor Petr Kotlár as the boy. It’s difficult to assess the specifics of his often stoic performance as such. But given the (simulated, but still) tortures to which he was subjected, I’d say the kid deserves a Nobel Prize and a lifetime pension.

Some have described the hellscapes that unfold here as Boschian, but in terms of composition and the rich black and white film tones, the affinity to Breughel is far more explicit. With Breughel, asking what was the point was beside the, um, point. A painting like “The Triumph of Death” is just that. Is that the kind of timelessness to which Marhoul aspires in this movie, rather than a specific portrait of a near-apocalyptic recent world historical moment?

Hard to say. What I can tell you: In a Russian Army raid on a village, a soldier accosts a Rasputin lookalike who stands amid the carnage praying, wrests, the crucifix from the man’s hands, and plunges its sharpened end (why it is sharpened I have no idea) into the man’s breastbone. It’s a striking, horrific, and surreal image on the one hand, and more than a little over-determined on the other. 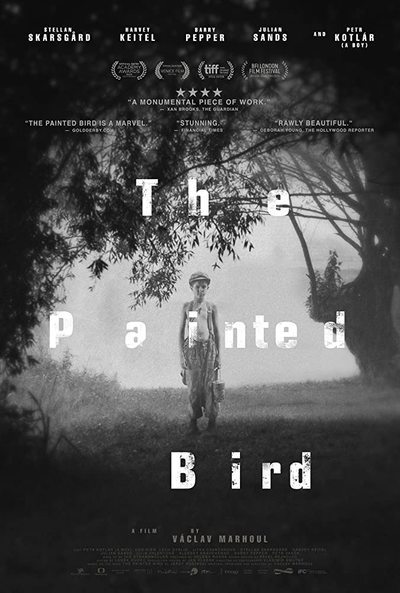