A history of filmmaking, surveillance, and subjective and objective framings of both, "All Light, Everywhere" is a nonfiction feature that plays like a season of brainy nonfiction TV compacted into two hours' running time. Conceived by Baltimore-based filmmaker Theo Anthony, whose other location-specific, idea-driven projects include the excellent "Rat Film," it tries to touch on every significant cultural, technological, and philosophical aspect of surveillance, including how easy it is for tech that is theoretically objective, detached, logical, and so forth, to be manipulated, abused, and withheld; and how people's biases and cultural conditioning affect how they interpret the data they're looking at, whether it's satellite images of inner-city neighborhoods or body camera footage of a police confrontation with a citizen.

And this is but one small corner of a warehouse of information, so vast and cluttered that "All Light, Everywhere" often seems to have trouble picking one line of inquiry or argument and sustaining it before having a related thought, then following that for a while before jumping to something else. Anthony's cross-cut structure hops among parallel storylines and historical anecdotes, each putting a different frame around the film thematic interests.

The name of police murder victim Freddie Gray is invoked early, and his fate lingers in the backs of our minds as the movie unfolds. Anthony and his collaborators contrast the the gee-whiz excitement of executives, salesmen, and spokesmen (they're all white and male) in the surveillance industry against the skepticism of progressive watchdogs; philosophers and ethicists both past and present; and Black Baltimore residents who are not content to be mere "subjects" in whatever plan these modern industries are implementing for profit.

The monotonous narration—by a woman who tells us that her voice represents the blind spot at the back of the eye where the image is interpreted by the brain—is the biggest conceptual swing in a project filled with them. It proves counterproductive, though, not merely because the voice-over has a sleep-aid effect, but because there's nothing after that point that makes us feel as if we're hearing something other than, well, just plain old third-person "expert" narration, like what you'd encounter on a random BBC or PBS documentary made decades ago. But it does provide much-needed context that (ironically or not) pictures and sounds alone cannot provide. And at its best, it provides a regular stream of cheeky aphorisms, like what you might hear (or see written onscreen) in a Jean-Luc Godard essay movie like "Goodbye to Language," or a work inspired by Godard ("the act of observation obscures the observation" and so on).

The film is more effective when it's sticking with one line of thought, whether focusing on present-day issues or history that puts modern problems in perspective. There's good stuff here about the relationship between motion picture cameras and the development of automatic weapons (which were created around the same time, with early Zoetrope-type devices modeled on the Gatling gun) and the interchangeability of photographic and military language (both camerapeople and soldiers get targets in their sights and shoot them). Along the way, there are sidebars about the invention of motion picture technology, which arose from studying the movement of Venus around the sun; the intersection of prison panopticon strategies and Europe's subjugation of nonwhite colonies; the relationship between Darwinism, eugenics, and white supremacy; and larger questions about subjectivity and objectivity in relation to the struggle to decide what is authentic and true and what is manufactured and false.

The idea that images and image-recording technology can become extensions of state subjugation and white supremacist ideals is the most urgent and powerful line of inquiry in the movie, never more so than when Black Baltimoreans are having a community meeting with a representative of a company that wants to put additional cameras in their neighborhood, allegedly to deter crime. This riveting scene (broken into pieces, alas, and used for more crosscutting effects, to its detriment) implicates the film itself, which was made predominantly by white artists. The Black folks in the room call the filmmakers out for not having any people of color on the crew (one of them says that he personally knows several who could've participated) and ding one of the meeting sponsors, a Black clergyman, for not being crystal-clear with them about how footage would be used in Anthony’s documentary. The face of the most eloquent angry person in the room, a Haitian immigrant, is blurred, presumably because Anthony wanted him in the movie but didn't want to get sued—a choice that deserves its own short film.

The movie keeps returning to the intersection of race and police work—particularly when focusing on Scottsdale, Arizona-based Axon Technology, formerly Taser, which manufactures stun guns, body cameras, and other gadgets. A spokesperson for Axon keeps inadvertently serving up metaphors and ironies on a silver platter, and the film feasts on them. At one point he gives the crew a tour of a plant where body cameras and weapons are manufactured, brags that the open floor plan is a testament to the company’s belief in "transparency" and "candor," then directs his visitors' attention to a "black box" area on the second floor where researchers can block their picture window view of the shop floor, to prevent anyone from seeing what they're making. Later, the filmmakers go inside the "black box" area and have the Axon spokesman show how the windows can be blotted out at the touch of a button. He does it over and over, beaming at how cool it is.

Obviously there's no single correct answer to be found in any of these detours, a couple of which nearly become narrative cul-de-sacs until the film recovers and jumps back to the present. It's to the credit of Anthony, who wrote and edited as well as directed, and his cinematographer Corey Hughes, that you come away thinking about parts of the film that felt like cut-able digressions and undergraduate musings when you were watching them. As a freestanding work, "All Light, Everywhere" has got more problems than can be described here. But as a gift-bag of prompts for discussion, it's hard to beat.

Dan Deacon's brilliant ambient synth score provides another layer of irony. Evoking naive, retro, high-tech wonder, in the manner of Vangelis' score for the original "Blade Runner," it creates a sinister undertow without resorting to obvious tactics. It's as if the smiling men in ties who are constantly trying to sell the filmmakers and us on the marvels of their wares have been put in charge of the soundtrack, and tried to use it to drown out misgivings by putting us in the headspace of a kid who thinks it's awesomely cool. There are times when the score intensifies the too-muchness of the film, and not in a helpful way; when Anthony is taking a long moment to show us objects rolling through assembly lines or people in an observation room participating in an eye movement study where a water glass and a fern inexplicably levitate, and Deacon is going to town on the synthesizers, it's as if we've traveled back in time to experience the opening of EPCOT Center at Disney World circa 1979, in the company of students who got baked on the monorail platform on the way in.

Still, there's something to be said for an aesthetic that owns the dynamics of a wandering mind in the way that this film does. And if one takeaway resonates more strongly than the others, it's that the definition of objective truth depends on where you're standing, what you're looking at, and what you decided to notice in the first place. Which, of course, means that somebody else could watch this film and come away feeling as if they've seen a classic that manages to put a multi-faceted subject in its viewfinder and examine it from every angle. 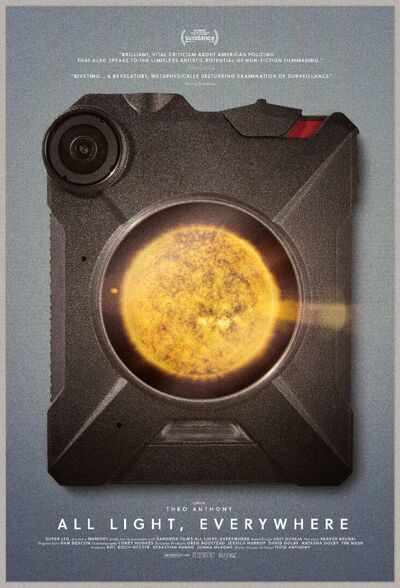 Theo Anthony as Self