Early on in "Rat Film," Edmund, the philosophical rat exterminator, exclaims: "There ain't never been a rat problem in Baltimore. There's a people problem." Unpacking what Edmund means by that is part of the goal of Theo Anthony's eccentric feature-length debut, a patchwork quilt of influences—civic, social, racial—showing the historical striations that lead to what appears to be a fairly epic "rat problem." "Rat Film" is an odd and captivating experience, and its fluid style is its most distinguishing characteristic. Moving through multiple moods and atmospheres, accompanied by an atonal and skittery score by Dan Deacon, "Rat Film" stays in the "micro" level (the history of the rodent population of one particular area), but its meditative atmosphere encourages "macro" thinking (as does Edmund, the exterminator). Anthony, a Baltimore native, knows the territory well, and approaches his topic with the spirit of an investigator and historian. Rats. They live among us. What causes infestations, why do we fear rats and revile them, what does their presence signify?

"Rat Film" is not a conventional documentary where the priority is the information being imparted. "Rat Film" is filled with information but Anthony uses a variety of styles to enter multiple worlds. The Edmund sections are played straight, a camera on Edmund as he makes his rounds, pontificating. Edmund is a good guide. But there are other more sections, accompanied by a whispery almost-robotic female voiceover, filling in the blanks in the narrative. There are sequences on the layout of Baltimore, outlining the various ordinances regarding neighborhood borders, borders that enforced segregation (one particular ordinance was struck down eventually by the Supreme Court, but still practiced unofficially by landlords.) To this day, the map of Baltimore is a "map frozen," in the memorable words in the voiceover.

On the heels of that, Anthony details the history of the war on rats in Baltimore. There are some key figures in the quest to develop an effective rat poison. One of the first pest-control initiatives took place in Baltimore. What is the behavior of rats? What do they like to eat? What will draw them out? What will kill them? Anthony walks us through many of the fascinating studies. The memory of those color-coded maps of segregation haunt these sequences deliberately because the problem goes deeper than the rats themselves (as Edmund himself observed). What about improving conditions in the slums? What about making sure everyone has access to clean water and prompt garbage pickup? These civic questions loom through the film, mainly because they go unanswered. It's as though everyone is working on the symptoms of the problem and not the source.

Anthony also seeks out contemporary figures, all of whom are rat obsessives. ("Rat Film" makes it seem like Baltimore has one thing on its mind at all times.) There's the couple who keeps rats as pets, rodents draping over their heads as they watch television. There are the people who breed rats in order to feed their snakes. There's one guy who keeps an arsenal at the ready to kill the rats in his tiny backyard. He's shown skulking around the back alley like a wannabe SWAT commando, stalking his hidden enemy. The most memorable is a dynamic duo who spend their nights "rat-fishing," placing themselves at the head of alleys with fishing poles and specially-prepared bait, designed to draw the rats out, rats seen scurrying back and forth in a swarm down the alley. Baltimore, in these sequences, looks like a glamorous wasteland, with empty buildings, thick shadows, streets strewn with trash, the two men standing guard, fragile bulwarks against a pandemic problem.

Anthony follows his obsessions. There are sequences that don't address the rats specifically but dig into the everyday texture of Baltimore itself, its street layout, buildings, trees. The creation of a video game, taking place in the streets of Baltimore, using 3-D photography overlaying drawings, moves "Rat Film" into the surreal, an imaginative intermediary space where Baltimore still exists, yet in a form slightly skewed from reality.

One of the most fascinating sections has very little to do with rats, but deepens the eccentric history of the city, its attention to detail, its pioneering spirit, its willingness to grapple with evil and the dark forces that stalk the streets, human or rodent. Mrs. Frances Glessner Lee, a home-schooled socialite from Chicago, created a series of exquisitely detailed dioramas in the 1940s and 50s, showing horrific crime scenes. They are like Weegee photos in 3-D miniature. These dioramas are still used as training tools for law enforcement officers. Her "Nutshell Studies of Unexplained Death" were donated to the Maryland Medical Examiner's office, and a criminal investigator and historian provides us with a tour. You can feel how drawn Anthony is to this material, to these mini-worlds splattered with fake blood. An entire film could be made about Mrs. Lee and the enduring fascination of her work. What this has to do with rats is not particularly clear. It’s a tangent, but such a tantalizing tangent it almost takes over the rest of the film’s purpose.

Winston Smith is not alone. To many, throughout history, the "worst thing in the world" are rats. There are other ancient human phobias - snakes, arachnids - creatures who may be beautiful and useful but are harmful to humans. Humans learn to stay away. (If you, like Winston Smith, have a rodent phobia, "Rat Film" will be very challenging.) Humans have been declaring war on the rat for millennia. The waves of plague that decimated Europe in the Middle Ages were thought at the time to come from foul air, a miasma of poison, but, no, it was because of the rats (or the fleas that live on rats). (A recent study lets rats off the hook. Gerbils are now the probable culprits.) But, as Edmund the exterminator observes, it's not the rats. It's the people. The streets of Bel Air are not swarming with rats. If you live in crowded and unsanitary conditions, rats will follow. "That's where you're gonna find the rat," says Edmund. "With people who have no dreams. Just survival." 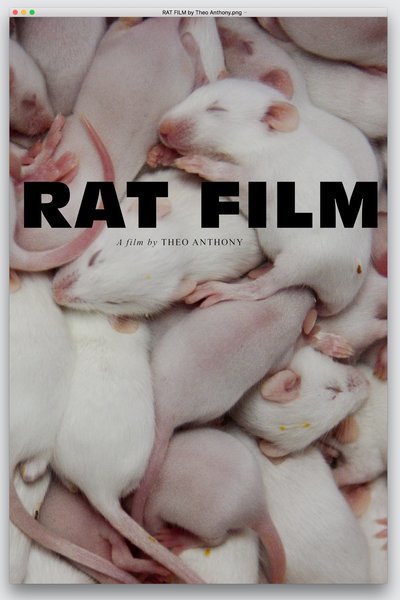