Greatness and miscalculation fight for screen space in Steven Spielberg's "A.I. Artificial Intelligence," a movie both wonderful and maddening. Here is one of the most ambitious films of recent years, filled with wondrous sights and provocative ideas, but it miscalculates in asking us to invest our emotions in a character that is, after all, a machine.

"What responsibility does a human have to a robot that genuinely loves?" the film asks, and the answer is: none. Because the robot does not genuinely love. It genuinely only seems to love. We are expert at projecting human emotions into non-human subjects, from animals to clouds to computer games, but the emotions reside only in our minds. "A.I." evades its responsibility to deal rigorously with this trait and goes for an ending that wants us to cry, but had me asking questions just when I should have been finding answers.

At the center of the movie is an idea from Brian Aldiss' 1969 short story, "Supertoys Last All Summer Long," about an advanced cybernetic pet that is abandoned in the woods. When real household animals are abandoned, there is the sense that humans have broken their compact with them. But when a manufactured pet is thrown away, is that really any different from junking a computer? (I hope Buzz Lightyear is not reading these words.) From a coldly logical point of view, should we think of David, the cute young hero of "A.I.," as more than a very advanced gigapet? Do our human feelings for him make him human? Stanley Kubrick worked on this material for 15 years, before passing it on to Spielberg, who has not solved it, either. It involves man's relationship to those tools that so closely mirror our own desires that we confuse them with flesh and blood; consider that Charles Lindbergh's autobiography We is about himself and an airplane. When we lose a toy, the pain is ours, not the toy's, and by following an abandoned robot boy rather than the parents who threw him away, Spielberg misses the real story.

The film opens with cerebral creepiness, as Professor Hobby (William Hurt) presides at a meeting of a company that makes humanoid robots (or "mechas"). We are in the future; global warming has drowned the world's coastlines, but the American economy has survived, thanks to its exploitation of mechas. "I propose that we build a robot that can love," Hobby says.

Twenty months later, we meet Monica and Henry (Frances O'Connor and Sam Robards), a married couple whose own child has been frozen until a cure can be devised for his disease. The husband brings home David (Haley Joel Osment), a mecha who looks as lifelike and lovable as--well, Haley Joel Osment.

"There's no substitute for your own child!" sobs Monica, and Henry tries to placate her: "I'll take him back." Cold, but realistic, David is only a product. Yet he has an advanced chip that allows him to learn, adapt and "love," when Monica permanently "imprints" him. In some of the film's most intriguing passages, Spielberg explores the paradoxes that result, as David wins their love and yet is never--quite--a real boy. He doesn't sleep, but he observes bedtime. He doesn't eat, but so fervent is his desire to belong that he damages his wiring by ingesting spinach (wouldn't a mecha be programmed not to put things into its mouth?). David is treated with cruelty by other kids; humans are frequently violent and resentful against mechas. Why? Maybe for the same reason that we swear at computers.

Events take place that cause David's "mother" to abandon him in the woods, opening the second and most extraordinary section of the movie, as the little mecha (and Teddy, his mecha pet bear) wander lost through the world, and he dreams of becoming a real boy and earning Monica's love. He knows Pinocchio from his bedtime reading and believes that the Blue Fairy might be able to make him real. David and Teddy are befriended by Gigolo Joe (Jude Law), a love mecha, living the life of a hustler. There is a sequence at a Flesh Fair, not unlike a WWF event, at which humans cheer as mechas are destroyed grotesquely. Eventually, after a harrowing escape, they arrive at Rouge City, where a wizard tells David where to look for the Blue Fairy.

It's here that "A.I." moves into its most visionary and problematical material, in spectacular scenes set in a drowned New York. There are secrets I won't reveal, but at one point, David settles down to wait a very long time for the Blue Fairy, and the movie intends his wait to be poignant but for me, it was a case of a looping computer program--not a cause for tears, but a case for rebooting. In the final scenes, David is studied in a way I will not reveal; it is up to us to determine who, or what, his examiners are.

The movie is enormously provocative, but the story seems to skew against its natural grain. It bets its emotional capital on David and his desire to be a real boy, but it's the old woodcarver Geppetto, not the blockhead puppet, who is the poignant figure in Pinocchio. The movie toys with David's nature in the edgy party scenes, but then buys into his lovability instead of balancing on the divide between man and machine. Both of the closing sequences--the long wait, and an investigation--are unsuccessful. The first goes over the top. The second raises questions that it isn't prepared to answer. There are a couple of possible earlier endings that would have resulted in a tougher movie.

Haley Joel Osment and Jude Law take the acting honors (and of course Hurt is perfect at evoking the professor). Osment, who is onscreen in almost every scene, is one of the best actors now working. His David is not a cute little boy but a cute little boy mecha ; we get not the lovable kid from "The Sixth Sense" but something subtly different. The movie's special effects are awesome. The photography by Janusz Kaminski reflects Spielberg's interest in backlighting, bright whites and the curiously evocative visible beams of flashlights. The effects seamlessly marry the real with the imaginary.

"A.I." is audacious, technically masterful, challenging, sometimes moving, ceaselessly watchable. What holds it back from greatness is a failure to really engage the ideas that it introduces. The movie's conclusion is too facile and sentimental, given what has gone before. It has mastered the artificial, but not the intelligence. 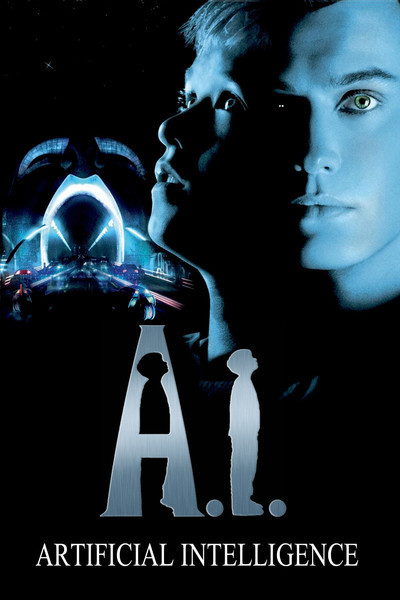