Imagine James Bond as a suburban American 15-year-old, and you have "Agent Cody Banks," a high-speed, high-tech kiddie thriller that's kinda cute but sorta relentless. Frankie Muniz stars as Cody, whose martial arts skills, skateboarding, ceiling-walking and extreme snowboarding are all the more remarkable when you consider that he goes into action before the CIA has time to give him much more than what, in the Bond pictures, is the Q routine with the neat gizmos.

Frankie lives with his parents (Cynthia Stevenson and Daniel Roebuck), who mean well but are so inattentive they don't notice their son has become a spy with international missions.

His CIA handler (Angie Harmon, low-cut and sexy) wants him to befriend a classmate named Natalie Connors (Hilary Duff, from "Lizzie McGuire"). Frankie is, alas, so tongue-tied around girls that his grade-school brother can boast, "Cody's almost 16 and I've had twice as many dates as he has." Cody fights back ("Sitting in a treehouse doesn't count"), but the kid is serene ("It does when you're playing doctor").

Natalie attends the ultra-exclusive William Donovan Prep School, no doubt named for the famous World War II spy "Wild Bill" Donovan, and Frankie transfers there, uses his karate skills to silence hecklers and ends up on a mission to liberate Natalie's father, Dr. Connors (Martin Donovan), from the clutches of the evil masterminds Brinkman and Molay (Ian McShane and Arnold Vosloo), who want to (we know this part by heart) Attain World Domination by using the doctor's inventions--microscopic Nanobots that can eat through anything.

The movie imitates its Bond origins with a lot of neat toys. Cody is given a BMW skateboard that has unsuspected versatility, and a jet-powered snowboard, and a sports car, and X-ray glasses (Hello, Angie Harmon!) and a watch that will send electricity through your enemies, although I think (I'm not sure about this) you should not be wearing it yourself at the time.

The set design includes the scientist's laboratory in underground World Domination Headquarters--which includes, as students of Ebert's Bigger Little Movie Glossary will not be surprised to learn, commodious and well-lighted overhead air ducts so that Cody can position himself in comfort directly above all important conversations. There are also CIA regional headquarters, with a conference table that looks designed by Captain Nemo in a nightmare. We learn that the CIA runs summer camps to train kids to become junior spies, although why Harmon, who seems to be playing Young Mrs. Robinson, is their handler is hard to explain--maybe she's there for the dads, in the movie and in the audience.

The movie will be compared with the two "Spy Kids" pictures, and looks more expensive and high-tech but isn't as much fun. It has a lot of skill and energy, but its wit is more predictable and less delightful. It's a well-made movie, to be sure, and will probably entertain its target audience, but its target audience is probably not reading this review, and you (for whatever reason) are. The difference is, I could look you in the eye and recommend you go see the "Spy Kids" movies, but this one, if you're not a kid, I don't think so. 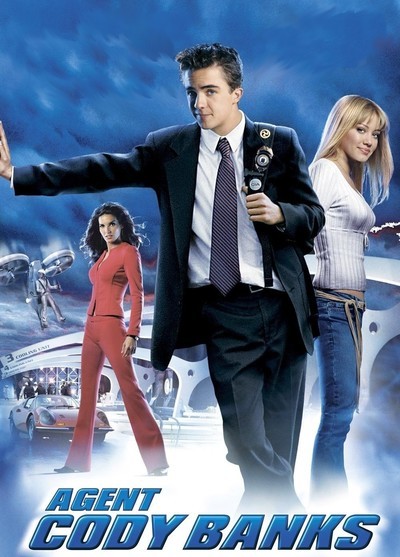