In the foreground, an 11-year-old girl lies asleep in bed. On the balcony beyond, seen through the plate-glass door, the girl's father struggles to light a cigarette, hampered by the cast on his right arm. Mission accomplished, he sways back and forth rhythmically, arms moving outwards and upwards and down, a dreamy approximation of Tai Chi moves, perhaps. It's not quite clear what is going on with him, since the camera doesn't move in closer, and there are barriers separating us from him. This is a moment of solitude for the father, snatched at the end of the day when his child is asleep. The daughter's deep breathing provides the rhythm for the father's movements, and there's something almost eerie about the moment. The 11-year-old daughter sleeps through it all.

This question lies at the shifting center of Charlotte Wells' moving debut feature "Aftersun," detailing a father-daughter vacation at a cheap resort in Turkey, and the scene above—which comes early on, when we're still getting our bearings—is key. There's something unknowable about Calum (Paul Mescal), and maybe this is because Sophie (Frankie Corio) is a child, and he's her dad, and she's just about coming to the age where she's separating herself and becoming her own person.

There's an uneasiness in the sequence, but the source of it is hard to place, or even name, particularly since Calum and Sophie are enjoying their vacation, overall. The occasional friction is of the normal parent-child variety, nothing too toxic, nothing too traumatic. But the depths, as they say, are sounded. The child is perceptive, and senses things, even if she can't put it into words (although often she can). She perceives more than her father thinks she does. But children are resilient. It is possible to perceive a parent's existential anxiety and still have a great time making a new friend at the arcade. The two things even happen simultaneously. Consciousness operates on multiple tracks and "Aftersun" understands this. The multi-level awareness is not in the dialogue, but it's there in the film's gentle rhythms, the editorial choices, the patience and sensitivity of Wells' approach.

Sophie's parents are separated, and she lives mainly with her mother. Calum talks about getting a new place, where Sophie will have her own room, and maybe starting a new business with someone named "Keith," and from the way he talks about all this it's obvious he barely believes in any of it. Something's not gone right for him. Does he party too much? He became a father at a young age. There are "clues" that his life hasn't quite worked out the way he had hoped. He has brought books on meditation and Tai Chi, suggesting not so much a lifelong practice as a way to stave off anxiety. His worries weigh him down. Sophie senses this. It's tense when she loses her scuba mask, and she informs him she knows it's expensive and she's sorry. Calum is taken aback by her remark. He thought his worries were well-hidden. Calum may be a bit adrift, but he clearly loves his daughter. They have a little tiff at one point, and he apologizes to her later for his behavior. He's a good dad. Their energy together is comfortable, intimate, familiar.

"Aftersun" is clearly told from Sophie's point of view, but a perceptive viewer will notice there are scenes where Sophie is not present. The film, then, is from the adult Sophie's point of view, an adult—a new parent herself—looking back on this vacation, curious about what her father must have been going through. She knows her own memories of the vacation. But what was going on with him?

Wells intersperses the vacation with surreal dream-like "rave" sequences, where an adult Sophie (Celia Rowlson-Hall, whose 2016 directorial debut "Ma" I so admired and reviewed for this site) stands on a crowded dance floor, catching glimpses of her father writhing to the music in the intermittent lightning flashes of the strobe lights. She wants to get to him, touch him, hold him. Sophie is an adult now. She understands him so much better now. What would it be like if she could talk to him? They would still have so much to say to one another. In a way, "Aftersun" is an act of imaginative empathy. Sophie can now look at the things that child Sophie could not see.

This once-removed point of view, this slightly distanced stance, gives the film its melancholy melody of an almost elegiac sweetness. In the present moment, all is sunshine and laughter, Calum and Sophie having ice cream, getting mud baths, swimming, where it doesn't matter that the resort is cheap and there's construction going on. What matters is being together. Mescal (so wonderful in "Normal People") gives such a tactile earthy performance, grounded in the details. There are fleeting glimpses of worry and self-loathing, his fears about not being good enough, not being a good provider or failing her ... all of the things he feels he must hide—and, for the most part—does hide.

Frankie Corio is a newcomer. She's alert, sensitive, and a totally natural presence. The dynamic between Corio and Mescal is nothing short of amazing—they are so comfortable with one another! They're playful and thoughtful, they get joy from one another, but are capable of hurting one another too. This dynamic is a tribute to both Mescal and Corio, of course, but also a tribute to Wells' gifts in both casting and working with actors.

Cinematographer Gregory Oke uses a soft rich palette, summery and saturated, and often keeps the frame off-center, destabilizing the point of view. Calum is often seen through a doorway, or as a reflection—in a mirror or a television screen—obscured, half-there, half not-there, similar to adult Sophie's glimpses of him at the rave: the strobe is so violent, it's impossible to see him in full, to perceive him as there and in the flesh. Sound designer Jovan Ajder also does fine work, particularly in a scene when Calum stalks down to the beach in the middle of the night for a swim. Calum is swallowed up by the blackness, and the gentle lapping of the waves slowly crescendos to the sound of thundering surf.

Wells' 2015 short film "Tuesday" could be seen as "Aftersun" in embryo. A college student spends Tuesday nights at her dad's, even though her mother seems against it. The girl wanders through her dad's empty rooms, not so much snooping as touching his belongings—his guitar, one of his sweaters. He is not there. Where is he? Did he forget it was Tuesday? "Tuesday" is such a strong short film, filled with a young person's ache to understand a man so close to her, so close and yet so far away he might as well not be there at all.

I remember the moment I realized—not just intellectually, but viscerally—how young my parents were when they had me. I was looking at a photograph of my father holding two-year-old me in his arms. He was about 26 years old at the time. I stared at his face, its youthful curves, the light in his eyes, the gentle way he held onto my hand (mainly so I wouldn't yank his glasses off his face). I had a strange sense of time telescoping out on both ends. I thought of myself at 26 years old, how young and wild I was. It still seems unbelievable to me that he was that young. He was such a good dad. I would love to ask him about his life. I would love to ask him what it all was like for him. "Aftersun" is Wells' beautiful attempt to do the same. 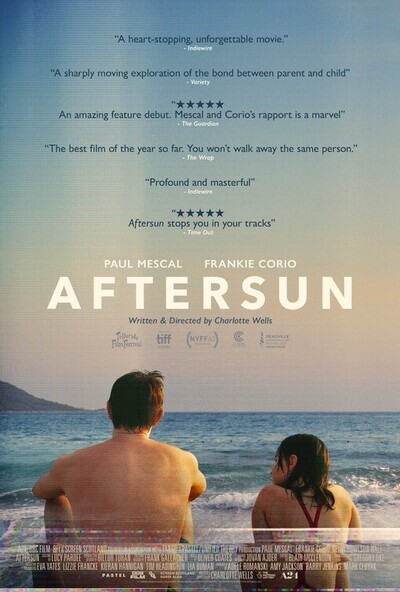 Rated R for some language and brief sexual material.