Celia Rowlson-Hall's feature film debut "Ma" doesn't fit into a neat category, or any category at all, for that matter. You could describe it as a meditation on the story of the Annunciation, told through dance and movement, although "meditation" isn't quite right either. There's a song sung at the end of the film by a little girl, but other than that, "Ma" unfolds without dialogue. Everything is told through gesture, frame composition and dance. Eerie stillness is interspersed with sometimes mysterious gestures, like code-signals yet to be translated or prehistoric cave markings. What do they signify? You might not get any answers to that question from "Ma," but "Ma" is more about its visuals than anything else.

A woman (played by Rowlson-Hall) emerges from the desert in the American Southwest, stepping out onto the lonely blacktop. She wears a loose T-shirt, a white cloth draped over her head. The red of her cowboy boots is the only bright color, instantly calling to mind Dorothy's ruby slippers. Her face is dusty. Her eyes are a clear almost white-blue. It's a startling face. She's got a thousand-yard stare. She moves slowly, without recognizable human behavior. She is a marble statue far from her pedestal. A man (Andrew Pastides) driving along the road pulls to a stop when he sees her. He's got blazing blue eyes that match his blue shirt. He stares at her as though she is a mirage. She crawls onto the hood of his car, splaying herself across the hood and windshield in a pose of abjection. Since it appears that she will not be moving anytime soon, he drives that way to the nearest motel, his car pulling into the parking lot like a ship with a living figurehead on its prow.

The man and woman end up traveling together, staying in a series of motel rooms, those brightly-colored yet ratty motels far off the Interstates, where brand-name chains don't reach. Where there's a huge swimming pool but with no water in it. The two communicate through gesture, sign language, and—in one awkward sequence (the only sequence that feels amateurish) playful pillow fights and gorilla imitations. Their journey is stalked by a group of men who infiltrate her room and gang-rape her, seemingly a couple of times. The men are dressed in immediately recognizable costumes (cop, soldier, lifeguard), making them a sort of nightmarescape Village People. But the man and the woman continue on, headed for Las Vegas.

Rowlson-Hall is a dancer, choreographer, and filmmaker. She's created choreography for music videos, commercials, short films (her own and others), television, feature films, for creators as diverse as Gaspar Noé and Lena Dunham. She is credited as the "movement consultant" for last year's stunning "The Fits," where movement plays such a central role it's impossible to imagine the film without her contribution. She's made numerous short films, many of which she stars in, using her lean dancer's body as her main storytelling vehicle. "The Audition" and "Prom Night" (both on YouTube in their entirety) give very good examples of where Rowlson-Hall is coming from, what interests her as a creator. "Prom Night" has a couple of moments that predict "Ma," as the lone woman at the prom twists up a white shirt and her prom dress, turning herself into a statue of Mary on the empty dance floor.

The Biblical story of Mary is plumbed for the symbolic resonance of its iconography as opposed to a wrestling with faith itself. This is not Pasolini's "The Gospel of St. Matthew." Or Colm Tóibín's short book/monologue "The Testament of Mary.” It's more of a riff on things we have seen a million times before: statues of Mary, statues of Mary and Jesus, paintings of the Apostles, of the Virgin Birth. There are a couple of Michelangelo's "Pietà" moments, and there's a stunner of a "Leonardo da Vinci Last Supper" moment (although Paul Thomas Anderson's Last Supper moment in "Inherent Vice" takes the cake). With cinematographer Ian Bloom, Rowlson-Hall squints at the landscape with assessing eyes, finding the most interesting aspects and angles of a row of motel rooms, a lonely road, a skyline. The film was not made for a lot of money, but it looks exquisite, with not one uninteresting or prosaic shot. What anchors these images are the bodies that move through them, her horizontal swoon backwards on the motel bed, her fetal position at the bottom of an empty swimming pool, a line of figures struggling across the top of a sand dune at dusk. What all of this might have to DO with anything is not always clear, but what is clear is Rowlson-Hall's love of images. She seems to ask herself, Wouldn't it be beautiful to see a dancer in soldier's-camo somersault and swan-dive his way down that sand dune? Yes. It would be beautiful, and it is.

"Ma" falls into all the traps you can probably imagine just from hearing the description. It takes itself very seriously. When it tries to lighten the mood, it feels false. It's what some people might call "self-indulgent." But I wish that more artists would indulge themselves, their passions, obsessions, questions. Through "indulging," you get unique and challenging art told from a personal point of view. Sure, sometimes it falls flat or doesn't work, but at least it's coming from a personal non-cookie-cutter place. Picasso "indulged" himself. James Joyce "indulged" himself. John Cassavetes "indulged" himself. They let us into their inner worlds, and they did so facing criticism from those who hated and rejected their innovations. Rowlson-Hall has indulged herself in "Ma," and has created a bold and unique film that has "personal" written all over it. No one else could have made it. This should be celebrated. 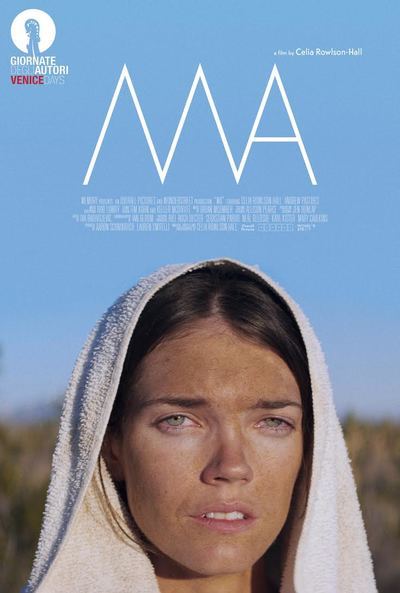