“After,” the adaptation of the first book in Anna Todd’s series of novels chronicling the ups-and-downs of a passionate romance between an innocent young woman and the smooth-chested bad boy who unexpectedly swept her off her feet (among other things), was one of last year’s very worst films—it took me no less than three attempts to get to the end when I finally caught up with it and watching terrible movies is a professional skill of mine. That said, at least its flaws were of the run-of-the-mill variety—dull characters, insipid plotting, and a complete lack of chemistry between the two leads—and it could have even been argued that part of the problem was that I was not exactly the target audience for a story that evidently began as One Direction fan-fiction. And yet, as bad as it was, it comes across as borderline competent in the memory when compared to the follow-up, “After We Collided,” a film so lazy and inane that it feels as contemptuous towards its audience as I am towards it.

For those of you who somehow managed to miss “After,” it recounted the story of Tessa Young (Josephine Langford), the bookish and repressed daughter of an overbearing mother (Selma Blair). At college, Tessa quickly found herself in the thrall of Hardin Scott (Hero Fiennes Tiffin), the campus Lothario whose bad-boy exterior masked a tortured soul that only she could properly nurture. Viewers watched the progression, for lack of a better word, of their relationship—with older ones quizzically noting the presence of such familiar faces as Blair, Peter Gallagher, and Jennifer Beals in brief throwaway roles along the way—before coming to the shocking climactic revelation that Hardin’s wooing of Tessa was the result of a dare. This caused her to dump him, sensibly enough, but the final moments of the film suggested that there might be a happy ending for them after all.

As it turns out, that optimistic conclusion was merely a figment of Hardin’s imagination and when we first see him, a month after the events of the first film, he is filling his days drinking, getting tattoos and pining for his lost love. As for Tessa, she has a slightly stronger rebound as she begins her new job as an intern reading manuscripts for a publishing company and manages to find the next mega-seller, is taken along by her boss for a wild night partying with investors (including a fancy new dress and hotel suite on the company dime) and makes goo-goo eyes with shy-but-hunky accountant Trevor (Dylan Sprouse), all within her first 24 hours of employment. Nevertheless, her feelings for Hardin are still there, and when his mother (Louise Lombard) arrives from England under the assumption that they are still together (don’t ask), she agrees to play along. This leads to an endless string of scenes that alternate between the two indulging in bouts of what a far wiser man once referred to as “rumpy-pumpy” and fighting over issues that could have easily been cleared up if they did not collectively possess the IQ of a crouton.

Along the way, Hardin’s Tortured Past comes back into play and rears its ugly head when he, along with Tessa and his mom, attends the fancy Christmas party thrown by his rich and estranged father (Rob Estes) and new stepmother (Karimah Westbrook), making a drunken spectacle of himself. The details of what transpires are forgettable (the film certainly has no real use for them) but those who saw the first film may be too distracted to notice because the roles of the father and stepmother were the ones played by Gallagher and Beals the first time around and who somehow managed to escape any involvement here—presumably by constructing and flying a homemade hot-air balloon to freedom. This is especially odd because Selma Blair is still around for a turn even briefer and more pointless than before. Her continued presence can only be explained in one of two ways—either her co-stars neglected to tell her of the balloon launch or she decided out of misguided loyalty towards director Roger Kumble, with whom she worked on the infinitely superior and thematically similar “Cruel Intentions” (1999).

So what is it about “After We Collided” that makes it bad? For starters, there is literally no story to be had in the screenplay (co-written by Todd), just a series of tedious incidents in a relationship, for lack of a better word, that somehow manage to come across as both startlingly toxic and completely innocuous. The two central characters are even duller and less appealing than before, and things are not helped by the complete lack of chemistry between them. Most hilariously, the film attempts to shake the original’s PG-13 origins by venturing into R-rated territory in the most inept ways possible—the script drops F-bombs with all the grace and subtlety of a 10-year-old boy who has just learned it, and the sex scenes are infused with the kind of heat that, if the movie were an oven, you would be checking the pilot light.

Too moronic to work as a serious romantic drama and too boring to work as straightforward sleaze, “After We Collided” is a film so dumb I fear that some may be tempted to look it up to see just how bad it really is. Instead of doing that, may I suggest that you instead seek out “The Souvenir” (2019), Joanna Hogg’s deeply felt depiction of a passionate-but-toxic relationship that was one of last year’s very best films and one that will stick with you long after it has ended. By comparison, all you will feel at the conclusion of this movie, besides a momentary burst of relief, is a sense of dread over the fact that this saga will apparently include two more installments before it concludes. Then again, maybe we will luck out and that will prove to be nothing more than a dream as well. 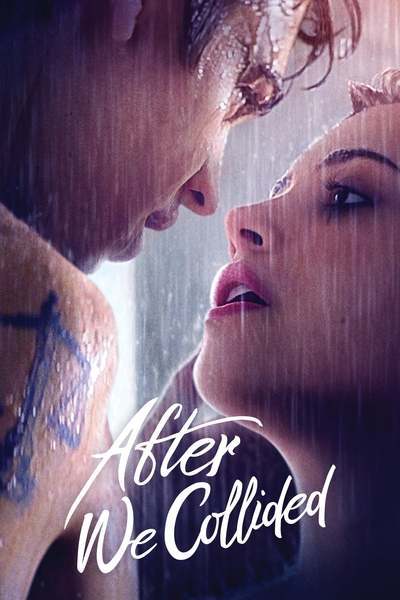 Rated R for sexual content, language throughout and some drug material.