I imagine that Joanna Hogg’s “The Souvenir” plays differently depending on your experience. From its Sundance premiere, I heard grumblings about its main character, Julie (Honor Swinton Byrne), and the frustrations some felt with her decision to stay in a clearly toxic relationship. For me, “The Souvenir” is perhaps the most empathetic movie to capture that kind of bad romance, the way it seeps into every aspect of your life, the way it changes your behavior, how you hold onto the memories of good times when things get rough and how after it ends, you're a changed person.

In Hogg’s semi-autobiographical movie, Julie is an aspiring film student who wants to tell stories outside her rarified privilege. By chance at a party one night, she strikes up a conversation with Anthony (Tom Burke), a mysterious and slightly older employee at the Foreign Office. He takes a great interest in her, challenges her ideas and courts her with letters that make her smile. Anthony introduces Julie to art, gives her movie recommendations and takes her out to fancy dinner clubs. He seamlessly becomes a part of her daily life and moves in with her. For Julie, it’s an idyllic whirlwind romance, until one night when she notices bruises on her lover’s arm. Anthony waves off her worries, but soon, more telltale signs begin to show. He constantly asks her for money, his absences grow longer and his behavior becomes more erratic. One of his friends eventually asks Julie what’s she’s doing dating a heroin addict. Their romance starts to cracks but doesn’t break. She still loves him and stays by his side when he goes through withdrawals and waits for him through the night until he wanders back to her.

Throughout Joanna Hogg’s previous films, “Unrelated,” “Archipelago” and “Exhibition,” the characters are mostly privileged, repressed members of British families who feel their way around emotions without ever verbally acknowledging them. Her stories take place in gorgeous, architecturally rich spaces or off at an idyllic vacation. Often she places her camera far from her characters’ faces to watch scenes play out from a distance, somewhat alienating the viewer from whatever inner turmoil is roiling within these people. Despite these characters’ material comforts and beautiful surroundings, there’s always a profound layer of vulnerability and insecurity in Hogg’s characters.

“The Souvenir” tops them all, in part because Swinton Byrne wears Julie’s vulnerability and insecurity as plainly as she if had put on a winter coat in summer. She gives a tremendous performance, balancing her character’s anxiety, her crumbling focus on school and her steadfast resolve to be there for Anthony with varying degrees of success before the next outburst. Without spelling it out, the movie touches on how important one feels when helping the person you love, the exhilaration of finding someone who understands you for the first time and the crushing realization that you might be out of your depth with his problems. Burke’s enigmatic work is just as remarkable as his co-star’s. He effortlessly keeps an air of mystery to Anthony but makes it subtly apparent why he has such a hold on Julie. Anthony lavishes attention on her and takes her seriously in ways her parents and teachers won’t. He listens to her intently, yet only rarely gives her the approval she so craves. He pulls her away from her work and friends and openly manipulates her emotions. But once they embrace, her frustration with him melts away, and their warped relationship cycle begins anew.

Not every shot in “The Souvenir” is in sequential order, and there are sporadic flashes to the countryside and the couple’s trip to Venice sprinkled throughout the narrative. The countryside is where Julie’s parents live, and it’s where her mind goes to when she’s working out thoughts. Her voice is her own in these interstitial scenes, unaffected by Anthony’s influence. Venice marked the beginning of the end of the couple’s happier times. At the start of their visit, she’s stressed and crying, and later, when dressed up and heading to the opera, they walk up a flight of stairs separately, with Julie following Anthony rather than beside him, their unequal relationship dynamic rendered as gorgeously as a magazine perfume ad. Yet, in between these painful moments, there are moments of affection and passion, and those seemingly random shots of Venice become the memories she uses to justify staying in the relationship.

As with Hogg’s previous work, her architectural eye perfectly frames the tragedy in all its different stages. Most of the drama unravels in Julie’s flat, a small but light-filled space that becomes overwhelmed by Anthony’s moody presence. His fondness for dark suits and a floor length deep navy coat contrasts against Julie's pastel wardrobe. The mirrors in Julie’s flat and in the hotel room in Venice act like Hogg’s reflection on her past self, an understanding gaze that only comes with experience and time. David Raedeker’s cinematography has a soft quality to it, as if the movie itself were a kind of memory that’s no longer as sharp as it once was. Most of the eclectic soundtrack are new wave staples about love, like the Psychedelic Furs’ “Love My Way,” a reference to the story’s ‘80s setting and Julie’s hopeful mood about this new romance in her life.

On my rewatch of “The Souvenir,” I paid more attention to Tilda Swinton’s supporting performance opposite her daughter. Fittingly, she plays her mom in the movie as well. On-screen, they share Hogg’s trademark stifled relationship, in which Julie doesn’t appreciate her mother’s concerns for her but neither does she feel secure enough to tell her about her older boyfriend’s heroin addiction. There’s a tender scene near the end of the movie where the two women are up late waiting for Anthony, and Swinton’s character sends her daughter to bed saying she’ll wait for him in Julie’s place. Julie’s mom then sits on her bed with the lights on and a sorry stare. She had given her child everything and still fusses over her as a grown-up, yet she couldn’t protect her from this particular brand of heartbreak.

To steal a quote from “BoJack Horseman,” “When you look at someone through rose-colored glasses, all the red flags just look like flags.” With the combined efforts of Hogg, Swinton Byrne and Burke, “The Souvenir” recreates the sensation of riding an emotional roller coaster with an unstable partner: the dizzying highs, the free-falling lows and the unpredictable sharp turns that can be either terrifying or thrilling. The title of the movie comes from Jean-Honoré Fragonard’s painting that’s featured heavily throughout Julie and Anthony’s doomed affair, but “The Souvenir” doubles as a reference to the unseen but still painful bruises you can get with a relationship as rocky as theirs. Some days, I miss those rose-colored glasses, but I have the bruises to remind me why I took them off in the first place. 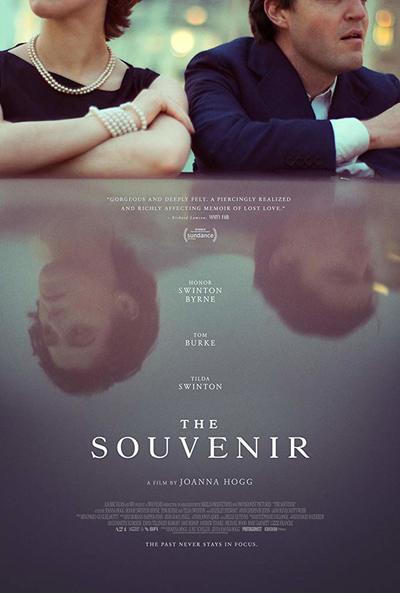