It's rare to encounter a non-franchise story so dependent on twists that it's impossible to evaluate in detail without describing every major thing that happens, but "After the Wedding" is that kind of movie. Michelle Williams stars as Isabel, an American woman who runs an orphanage in Kolkata, India. Julianne Moore is Theresa Young, the wealthy American who summons Isabel to New York promising to become her organization's largest benefactor as she prepares to sell the company she founded and cash out. Billy Crudup is Oscar Carlson, Theresa's sculptor husband. This also happens to be the weekend that Theresa and Oscar's daughter Grace (Abby Quinn) is marrying a nice young man named Frank (Will Chase). Complications ensue, and ...

I'm already banging my head against the desk in frustration here, so I'll just spend two paragraphs telling you what I thought of the movie overall, in vague terms, and you can decide if it sounds interesting, then come back and read beyond that paragraph to learn exactly why I didn't love it?

Okay, fabulous—let's do that, then.

"After the Wedding" is adapted and directed from a Susanne Bier original by Bart Freundlich, the maker of such American indie dramas as "The Myth of Fingerprints," and the husband of Moore, the leading lady in both movies. It feels very much like the kind of movie that would play at a film festival attended mainly by rich people who have summer homes in the community where the festival happens. Aside from bracketing sequences set at the orphanage, where Isabel has become a mother figure to an adorable little boy named Jai (Vir Pachisia), most of the movie is set in the realm of ultra-rich Americans, mainly in Theresa's glass-and-steel office building, the luxury Manhattan hotel where she puts Isabel up in a penthouse suite, and on the grounds of Theresa and Oscar's country estate. This is a Sad Rich People movie, no more so than a lot of American films dating back to the dawn of cinema, but it's no "The Leopard" or "The Royal Tenenbaums" or "The Great Gatsby" or you-name-it. It's just fuzzy enough and fragmented enough that the opulence immediately overwhelms the perspective of Isabel, who is set up to be our guide through the story, a polite but appalled observer who very deliberately rejected this world decades earlier.

The contrivances pile up almost immediately, revelations leading to more revelations and then to confrontations and arguments. But the movie doesn't savor them as a great melodrama or psychodrama should. It's too tasteful for that, often cutting away from potentially wrenching moments before we can have a proper wallow and returning later, after the messy, volatile part has presumably occurred offscreen. It's the film that seems repressed, more so than the characters, who sit on pain for a not-unreasonable amount of time and discuss their feelings plainly and mostly honestly. It's all very upper-crust European, in the vein of the kinds of bourgeois French films that tend to find their way to however many arthouses are still left in the United States, although there are no older male architects or composers with wives half their age and mistresses a third their age, there's no sex, and nobody plays classical piano over a montage of people driving.

And now we're onto the plot details part.

Shortly after Isabel arrives in New York, Theresa informs her that the donation to the orphanage isn't a done deal, that it's one of several gifts she's considering, a bit of information that bewilders Isabel; soon after, we learn that Oscar is Isabel's ex-boyfriend and Grace is the child that Isabel had with him with the understanding that she was going to be given up for adoption. Isabel left for India and Oscar changed his mind and kept the child, eventually settling into a new relationship with Theresa, who became a mother to Grace and had two more children (twin boys) with Oscar. On top of all this, Theresa has been diagnosed with terminal cancer, probably only has three months to live, but has decided to keep the information from her husband and children so that they won't feel sad.

This is all very "An Affair to Remember," the three-handkerchief climax of which can be Googled if you're not familiar with it already and don't feel like watching it on your own. There's a shamelessly powerful story about parents and children buried somewhere in all these plot machinations, a contrast of nature and nurture unfolding through carefully observed scenes of Grace interacting with Isabel, with their many similarities driving home the biological connection that she'll never have with her adoptive mother, however loving and well-meaning she might be. But there are so few meaty scenes between Isabel and Grace, or Theresa and Grace, that this avenue remains largely unexplored.

Similarly neglected are the cultural expectations placed on women that make some of them reflexively wave away the idea that they might be good mothers, perhaps from fear that they might get pressured into giving up their lives to motherhood when they want other things, too. The irony that Isabel escaped the burden of unwanted biological motherhood only to prove herself an exceptional mother to dozens of orphans (in a setting where she sets the terms, and on her own personal timetable) is something the film doesn't have the mental bandwidth to properly deal with, because it's so focused on the dynamic between its central trio.

There's also a good movie in here about the lengths that the rich will go to in order to control everyone else's lives, even those of individuals that they want to help. People like Isabel publicly demonstrate "generosity" and assuage their unnamed guilt over being able to afford lobster for their daughter's wedding reception, when most of the world lives more like the orphaned children that Isabel loves so much.

But Freundlich's script keeps hopscotching right past the good stuff. Williams, Moore and Crudup are phenomenal actors, and there are five or six moments of resentment and anguish that they play opposite each other or solo where their talent gets to pop. And there are finely observed details, like the moment when Isabel tells Oscar that she looked up his artwork online and was shocked by how bad it was, and the moment where Theresa orders for herself and Isabel in a restaurant without asking Isabel's permission (powerful people often do this without giving it a second thought; the Showtime series "Billions" brilliantly makes fun of it). But the movie keeps hurrying us past the sorts of sharp, true observations, because it's in a hurry to set up the next bombshell twist, and the next muted, mournful tableau set against an opulent backdrop. 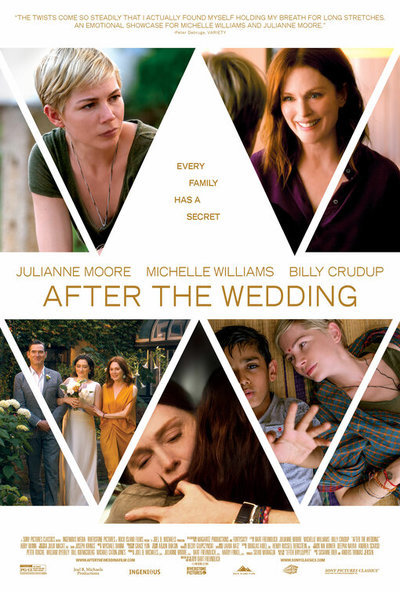 Rated PG-13 for thematic material and some strong language.