"After" opens with some narration about how certain moments in life seem to define a person, and from there, the clichés pretty much don't stop. If there's a defining moment in the life of Tessa Young (Josephine Langford), it's either meeting, initially being annoyed by, falling in love with, being heart-broken by, or reuniting with Hardin Scott (Hero Fiennes Tiffin).

She's a naïve, inexperienced young woman from the suburbs. He's a guy with a bad-boy attitude and image, who's really just a wounded softy beneath his declarations that love doesn't exist, his occasional outbursts of violence, and a body that's covered in some—let's say—eclectic tattoos. There's a row of what appear to be guinea pigs wearing sunglasses on his forearm. Yes, the romance between these two characters is such that it's all too easy to be distracted by a tattoo.

The movie is adapted from the first book in Anna Todd's series of novels, which might explain why nothing here seems to be on the life-defining level promised by the opening voice-over. Like the most recently popular series of such movie adaptations, there isn't so much an isolated story as there are about three major events, culminating in a final promise that future installments will provide us with something more.

Unlike a couple of the more popular examples of such wheel-spinning romances, there are neither supernatural creatures nor any scenes of kinky sex. The most we get here is a lot of sleepy actors, who perhaps could be mistaken for the undead in certain scenes, and some very polite foreplay.

The story has Tessa going off to college, accompanied by her mother Carol (Selma Blair) and her still-in-high-school boyfriend Noah (Dylan Arnold), who behaves more like a brother to Tessa, until he gives her a quick peck on the lips as a most underwhelming farewell. When that's the most a soon-to-be-dumped boyfriend can offer, the muted sensuality of her romance with Hardin does seem like a big step up.

Those two, by the way, meet when he's sitting in Tessa's dorm room, refusing to leave, after she gets out of the shower. They later get into a debate about Pride and Prejudice, in which their bickering is supposed to remind us of the famous couple from that novel. We know this because Susan McMartin's screenplay is explicit about the comparison, which is—let's say—a rather bold association.

The two eventually bond over their shared love of fiction books, with Tessa, running away from the prospect of kissing him during a game of Truth or Dare, being shocked to discover a copy of Wuthering Heights in Hardin's bedroom. They almost kiss then and there, but instead, their faces simply hover right next to each other. One probably could chart the progress of their relationship in terms of his face hovering over different parts of her body.

Things do escalate, or maybe they don't. It's difficult to tell if director Jenny Gage is simply restrained by the expectations of a young-adult romance, in which all of the sexy bits are implied, or if we're meant to take the scenes of sensuality at face value, in which case the couple basically undresses a little more with each encounter before cuddling. They do have sex, after the love-skeptical Hardin asks Tessa to move in with him, and there's an inevitable snag in the relationship shortly after, having to do with a couple of Hardin's drama-hungry friends. Much pouting follows.

If a good number of these observations seem to focus on the sex (or the probable lack thereof), it's only because nothing else in the movie rises to a similar level of interest—and definitely not to a level of such confused intrigue (save for some strange, plot-mandated choices on the part of a couple of side players, such as Tessa's mother all but disowning her daughter upon discovering the relationship). Tessa is left mostly as a blank slate, to move with the whims of the story and to react to Hardin's evolving outlook on her as a romantic interest. The performances are consistently monotone, and the dialogue is alternately treacly, in terms of romantic statements, and on-the-nose, in terms of giving Hardin a back story to explain his rebel act.

There's one moment in "After" when the two inevitable lovers dive underwater, and we're left with only the stillness and quiet of a lake. "It's beautiful, the silence," Hardin says upon emerging. You have no idea, kid. 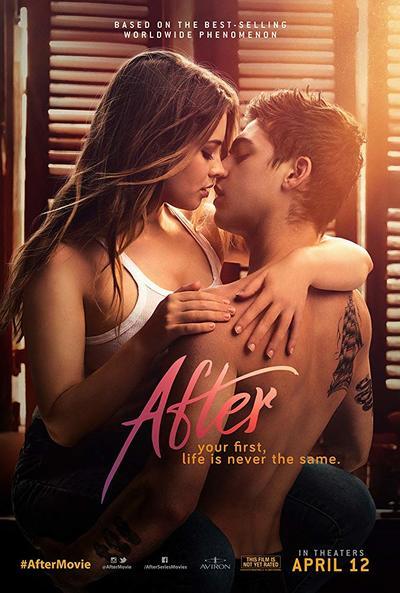 Rated PG-13 for sexual content and some college partying.