“After” is a handsomely mounted, largely watchable, and I suppose reasonably well-intentioned family drama with things to say about grief and loss and deception. It is also kind of irritating in is purposeful disingenuousness and determined challenges to plausibility. Your mileage may vary, as they say.

“Family’s the most important thing,” Nora Valentino (Kathleen Quinlan) chides one of her mildly recalcitrant children early on in the picture. Nora is the matriarch of a clan in Rochester, New York; its male head Mitch (John Doman) runs a stone works/contracting biz—or, as of late, has been letting his eldest son Christian (Pablo Schreiber) run it. There’s a screw-up younger brother, a bar-owning sister, and some extended family close to the clan, and it’s a pretty tight-knit bunch. But the apple of Nora’s eye is the one who’s never there physically: daughter Sam, who went to make her way in the big bad city of Manhattan a while back, and keeps in touch via chipper home-video updates, all delivered in VHS. For the movie is a period piece of sorts, set in the fall of 2002.

The Valentinos are pretty protective of Nora, who can snap emotionally for the seemingly flimsiest of reasons: she comes close to cracking up after inadvertently stepping on a single flower in her well-tended backyard garden. Looking after Nora takes its toll on Mitch, and when he’s not fiercely hovering over his wife he’s bitching about immigrants who are screwing up this country. He’s a tough guy to like, and Doman is in a sense almost too effective at depicting that side of the character. As Mitch is in this particular realm almost exclusively, Christian finds himself at loose ends trying to mop up the mess his dad’s business has become. It’s nice to see Schreiber in a role that’s not that of a complete sociopath (as on “Orange Is The New Black”) or utterly deranged lunatic (as on the highly overstated “Save Benson” story arc on “Law and Order: SVU”). And speaking of “SVU,” Diane Neal, who played a quietly sexy ADA on that show for a spell, cuts loose a bit here as a hard-drinking barmaid who, along with the actual Valentinos, is involved in a subterfuge that could spell disaster for the family at any second.

As I am not a spoilery kind of reviewer, I can say no more. As I mentioned, the movie is well put together. Nicely paced, attractively shot, competent dialogue, all that. The press materials for the picture talk about a “slow reveal,” but I myself guessed the story’s secret pretty quickly. And while I understand the place the movie is coming from, I just couldn’t buy the scenario, and in a certain respect, I couldn’t summon up what the filmmakers believe to be the necessary sympathy for its participants. As such, I found “After” a pretty unfulfilling sit. Its conscientiousness is marred, I think, by a sentimentality that compels director Pieter Gasperz and writer Sabrina Gennerino to stretch a narrative metaphor way farther than could be reasonably tolerated. 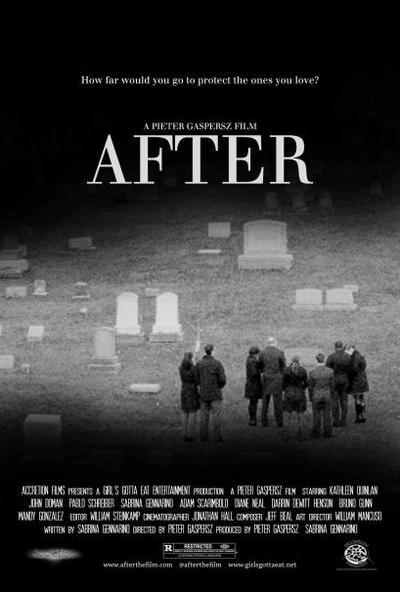