"Grudge Match" takes the popular boxing game of speculation and makes a movie out of it. You know how it goes: Someone will ask a question that kicks off hours of arguments. The most popular one I've heard is "Would Muhammad Ali in his prime beat a young Mike Tyson?" The answer, of course, is yes. See "The Rumble in the Jungle" for proof. Taking a page from Ali's playbook in that historic fight, Buster Douglas knocked Tyson out. And Buster Douglas is no Muhammad Ali. Discuss amongst yourselves.

It's doubtful that cinephiles would get into similar arguments about movie characters, but "Grudge Match" hopes you have. The commercials guarantee a fight between the actors who played two of the most memorable boxers in film history, Rocky Balboa and Jake LaMotta. The unfortunate thing is that these actors are not the same age as they were when they played those famous pugilists. I don't know who asked for a match between those two, but I assure you they didn't want a 70-year-old LaMotta and a 67-year old Rocky. Regardless of how much "Grudge Match" pokes fun at its stars' ages (their fight is sponsored by Geritol, for example), it's still two old guys beating the hell out of each other for your enjoyment. There's something a tad exploitative about this.

"Grudge Match" belongs to a fast-growing genre I'll call "Senior Citizen Action Porn," or SCAP. Proud members of SCAP include "Red" and its sequel, "Red 2," the "Expendables" series, and the best of the 2013 crop, Arnold Schwarzenegger's "The Last Stand." These movies may appear to give AARP members something to cheer about, but their main purpose is to soothe middle-aged men's fears of getting old. These films do not speak to anything relatable to people nearing retirement age. Instead, they trot out the action heroes of our adolescence, prop them up with weaponry and get them to do the things they did when they—and we—were younger. It's an ego boost for the actors and a hit off the nostalgia bong for us.

At least "Grudge Match" tries to strike a balance between a realistic portrayal of aging and its climactic, action-packed beatdown. It presents a few genuine moments of senior-worthy cheering tucked in the folds of a much younger audience's pandering. Our heroes lay a whuppin' to several folks who disrespect their elders, including a UFC athlete and LL Cool J. And there's a mildly sweet romance featuring Kim Basinger, who looks stunning at 60 and provides the film's sole voice of reason.

Sylvester Stallone plays Henry "Razor" Sharp, whose two famous matches with Robert De Niro's Billy "The Kid" McDonnen ended with a win for each of them. Their third match, the one that would have broken the tie, is forever put on hold when Razor abruptly resigns a week before the match. The animosity between Razor and The Kid is so great that, 30 years later, they still can't stand to be in the same room together.

Bringing them to that room is Dante Slate Jr. (Kevin Hart), son of the Don King-like boxing promoter who handled Razor vs. Kid I and II. Junior is promoting a boxing video game featuring both fighters, and offers Razor $1000 to record his voice and movements for the game. Razor agrees only if he can be scheduled at a different time than The Kid. The Kid has other ideas, showing up during Razor's recording session and causing an equipment-destroying fight. The footage goes viral, and suddenly there's a demand to see these two duke it out in the ring.

The two agree to do it, but for different reasons. Razor needs money so he can pay the retirement home rent of his old trainer "Lightning" (Alan Arkin), whom he springs once the fight has been announced. The Kid's motivation is simple revenge; he wants to pummel Razor to settle the decades old question of who's better. The Kid's heart is in it far more than Razor's, especially after Sally (Basinger) returns to town to see him. Sally was Razor's true love back in the day. She's also the mother of B.J. (Jon Bernthal), who happens to be The Kid's kid. This melodramatic development feels unnecessary, but it does allow Basinger and Stallone to remind us they can act. As in "Cop Land," the first Stallone-De Niro collaboration, Stallone acts rings around De Niro. As was the case in the dreadful "Last Vegas," De Niro spends way too much time in a whiny pity spiral that does him no favors.

Casting Kevin Hart was a great marketing idea. He'll pull in yet another generation of viewers. His verbal sparring matches with Arkin are prominently displayed in the ads, and while they're amusing, there is far less Kevin Hart than you're being led to believe. Hart brings a smarmy, Daffy Duck-like sense of hapless greed to his role, which nicely complements the curmudgeonly wisecrack-filled persona Arkin can play in his sleep. It's too bad we only get about 15 minutes of him.

When the climactic fight arrives, I found myself without a side to choose, because "Grudge Match" is too timid to ask me to commit to either boxer. Director Peter Segal shoots the match well, but even with the late reveal of one fighter's major disadvantage in the ring, I remained apathetic. I'll give credit to the film for picking a definitive winner, even if the match made the boxing associations of Nevada and New Jersey look like boy scouts compared to the one in Pennsylvania. They sanction a lawsuit and/or a murder waiting to happen.

I'm a sucker for boxing movies, so my rating is a tad higher than it should be. But I have limits, and seeing De Niro and Stallone go at it here had the opposite effect than the one "Grudge Match" intended. It broke my nostalgia, casting a gloomy dark cloud over my memories of "Rocky" and "Raging Bull." I didn't need to see this. Truth be told, the real match between Stallone and De Niro occurred in 1976, when "Rocky" went up against "Taxi Driver." Like a lot of boxing matches, the outcome of that remains in dispute. 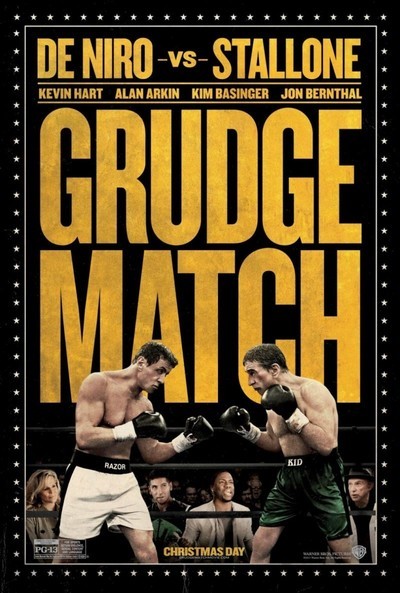