"A Simple Favor" is a pretty delicate balancing act. It's a thriller told with a broad sense of humor (even slapstick at times). One false move could have been deadly, resulting in a film self-serious, or straining to be "relevant," or—worse—just plain old boring. But "A Simple Favor," directed by Paul Feig, has its cake and eats it too. It's suspenseful, but also hilarious. It's insightful about the head games women can play with each other, but it doesn't burden itself with trying to be "meaningful." It's not trying to "say something" about "how we live now" or anything like that. What a relief to watch a film unafraid of letting its hair down.

The funky stylized credits sequence (designed by David Clayton) clues us in immediately that this isn't going to be a gloomy by-the-book thriller. A throwback to 1960s comedies or spy capers, the credits involve single-color images of stilettos and purses moving around in angular cut-out shapes, a collage of conspicuous consumption, with one of the many classic French pop songs blaring behind it. The soundtrack is filled with Serge Gainsbourg songs, including "Bonnie & Clyde," his duet with Brigitte Bardot, plus "Une Histoire de Plage," "Laisse Tomber les Filles," and Jean Paul Keller's "Ca C'est Arrange." Mood-setting is one of the most important aspects of film-making, and so many films fail to establish the proper mood from the jump. "A Simple Favor," written by Jessica Sharzer, an adaptation of Darcey Bell's novel, knows exactly what it needs to do to establish the mood for all that will follow.

Anna Kendrick plays Stephanie Smothers, a single mom who runs a popular "vlog," where she shares recipes, parenting tips, and DIY how-tos. She's a type-A personality all the way, over-volunteering at her son's school, making other parents feel like slackers. In a couple of swift scenes it's established that Stephanie is virtually friendless ... until Emily Nelson (Blake Lively)—whose son goes to school with Stephanie's son—strolls into her life. Emily has a high-powered job "in the city" (New York), and ropes Stephanie in to drinking martinis after picking up the boys from school. The two sit in her palatial glass-walled home, and get drunk. Stephanie is dazzled. It's not hard to see why. Emily is casually gorgeous, wearing high heels and pinstriped suits complete with gold watch chains. (Renee Ehrlich Kalfus deserves a lot of credit for her costume design.) Emily swears like a sailor (even in front of the kids), and has a direct way of speaking: she looks right at Stephanie, intimate, encouraging. Stephanie can't believe she has been "chosen" to be this fabulous creature's friend.

There are some red flags in Emily's behavior, which Stephanie ignores. Stephanie takes Emily's picture once, without Emily's consent, and Emily, in a tone that could cut glass, tells her to delete the photo. Emily's beauty is a smokescreen for an intimidating and mercurial personality, warm and encouraging one moment, slightly scary the next. Stephanie constantly apologizes for things, and Emily tells her to stop: "It's a fucked-up female habit." She's right. But Emily always keeps Stephanie just slightly off-balance. Both actresses are in high gear here. Kendrick is so awkward you yearn for Stephanie to just relax, but her awkwardness is why the performance is so funny. And Blake Lively is the reincarnation of Julie Christie in her best work in the 1960s and '70s: ruthless and charming, sexy and detached, a completely destabilizing presence to men and women alike. This is a great role for Lively.

And then, Emily goes missing. The police are called, and Stephanie finds herself the center of attention as Emily's "best friend." She helps Emily's husband Sean (Henry Golding) out with the kids, supports him in his grief and anxiety, and gives updates on her "vlog" (her follower count goes through the roof). But slowly, Stephanie starts to wonder if there might be more going on than meets the eye. What does Stephanie really know about Emily? Who is Emily? Even Nicky refers to his wife as a "beautiful ghost." Stephanie, underestimated and mocked, intimidated by Emily's cool gaze, finds a strength she didn't know she had, and "A Simple Favor" shifts, fluidly, into Stephanie: Girl Detective. She tries to piece together Emily's past, looking for clues. The whole situation is so gratifying because Stephanie is the same mousy overachiever, dressed in cute little combos from The Gap, only now she's sneaking through apartments and offices, breaking into filing cabinets, doing things she never thought she would—or could—do.

One of Paul Feig's gifts as a director is working with strong charismatic women, giving them space to whoop it up, work off one another, be co-creators. There's space in his approach, space left for behavior, humor, spontaneity. (Think of Melissa McCarthy and Sandra Bullock in "The Heat." That pairing could easily have become a franchise, should have become a franchise.) "A Simple Favor" has an intricate plot, with many surprise reveals as well as some truly spooky sequences, but it doesn't feel over-planned. Stephanie, at one point, goes into a panic, and shouts at Nicky, "Are you trying to 'Diabolique' me? Oh my God, you're trying to 'Diabolique' me!" It's a funny line, requiring you to know "Diabolique"— a remake of 1955's "Les Diaboliques," directed by Henri-Georges Clouzot—about a wife and mistress conspiring to kill the man they share in common. Those French pop songs don't dominate "A Simple Favor"'s soundtrack for nothing. The plot shares some similarities with "Gone Girl," but that's where the comparison should end. "Gone Girl" took itself very seriously. "A Simple Favor" doesn't take itself seriously at all. And that's a good thing. 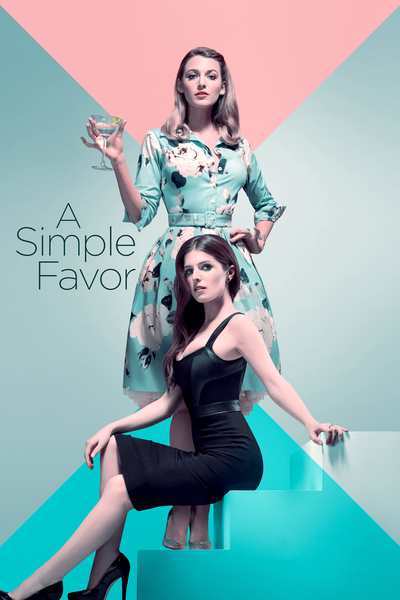 Rated R for sexual content and language throughout, some graphic nude images, drug use and violence.