A Fragile Trust: Plagiarism, Power, and Jayson Blair at the New York Times

"Jayson must stop writing for the paper now."

That was a sentence from a note sent by one New York Times’ reporter Jayson Blair’s supervisors to his then-managing editor, Gerald Boyd. The young reporter was known as a strong writer, an ambitious careerist, and a tireless worker. He was also flaky, did cocaine and drank to excess, and his archive of Times stories was riddled with corrections, some of them embarrassing. But nobody knew at the time that Blair had deeper problems, much less that he was a compulsive liar whose greatest skill wasn’t reporting or writing, but covering up evidence of misdeeds. "A Fragile Trust" lays it all out, sometimes in manipulative ways, but always with clarity, so that you understand what happened and how it happened.

Samantha Grant’s documentary about the Blair scandal plays like one of those Discovery Channel documentaries that explain why the Titanic sank or the New Orleans levees broke. It’s an anatomy of a workplace disaster that brought down the paper’s top two editorial executives, Boyd and executive editor Howell Raines. Because anyone watching probably knows how this story turned out, Grant’s account evokes horror movie reactions. You want to yell at the screen, "No! Don’t give him another chance!" or, "Just fire him. FIRE HIM!" But nobody listens, just as nobody listened to the various warnings sparked by Blair’s trail of deception.

He was the Picasso of Plagiarism, discovering new ways to fabricate the "great" stories from bits and pieces of stories reported by other people. He grasped that in the world of 21st Century digital journalism, you couldn’t just copy somebody else’s work wholesale. You had to steal a bit from this story, a bit from that one, a little bit from another, and put all the pilfered bits together, like a mosaic. Crippled by agoraphobia and substance abuse problems, he faked going out-of-state on assignments, and found a way to convincingly describe the places he never visited, by using a photo department password to study pictures taken and then discarded by photographers on the scene. When Jerry Gray, a New York Times political editor and Blair’s mentor as a summer intern, described Blair as "clearly head and shoulders above [his peers] in raw talent," he was right in the worst possible way.

"A Fragile Trust" takes a story that journalists and media watchers have read countless stories about and makes it reasonably cinematic. Grant, cinematographer Singeli Agnew, and editors Richard Levien and Jessica Jones have clearly studied and absorbed the non-fiction films of Errol Morris ("The Unknown Known", "Fast, Cheap & Out of Control"). The movie is filled with filmmaking techniques perfected by Morris: oddly abstract close-ups of ordinary objects, interview subjects posed like photo shoot participants, time-lapse photography, and pregnant pauses that allow a patina of regret to settle over the person who just finished speaking. Early on, composer Justin Melland’s score evokes Morris’ regular composer Philip Glass, though it soon evolves beyond homage and becomes the film’s greatest asset.

If you don’t know the story at all, you won’t mind that the documentary is covering heavily covered ground, albeit with impressive "gets." Interviews with Blair serve as the movie’s spine. Mini-montages accompanied by Blair reading from his memoir "Burning Down My Master’s House" act as connective tissue, joining testimonials and indictments by coworkers, bosses and reporters who've covered Blair's outrages. These include Gray, media analyst Howard Kurtz, "Hard News" author Seth Mnookin, and Raines himself, who retired from journalism when the Blair scandal rendered his four decade career and record seven Pulitzers worthless.

There are also details that will be of anthropological interest to j-school students and journalism historians. "A Fragile Trust" is most fascinating when discussing the Times’ struggle to transform itself from a daily printed on pulped wood into continuously updated "digital content provider" with an emphasis on "speed and impact."

At certain points, Raines becomes a second protagonist: the captain of an aircraft carrier nearly sunk by an alcoholic saboteur. He and his right-hand man Boyd get credit for guiding the Times through a turbulent period that included the September 11th attacks, the Iraq War, and a multi-pronged assault by technological and economic forces that decimated every daily newspaper in America. But they also take blame for pushing their staff to shovel content into a bottomless virtual maw. When Raines observes in the early aughts that "the market appeal of quality journalism seems to be in sharp decline", he’s acknowledging a reality that his own managerial relentlessness helped make respectable. He was part of the solution and the problem.

Where the film falls short is in its portrait of Blair as a character whose psychology is comprehensible after the fact. We learn, among other things, that Blair was a substance abuser, a brown-noser, a Baron Munchausen-level liar, and an adrenaline junkie who had to push his deceptions to increasingly baroque levels to maintain the high that coke and booze couldn’t give him. We learn that he was always a plagiarist and a liar, perhaps as early as high school; we learn that he’s bipolar and probably always was, and that his mental illness and addictive tendencies catalyzed the alienation and fear of failure burned into him after a lifetime of being one of the few brown faces in white rooms.

But we don’t learn this information in an order that seems orderly, logical, and fair. Like a good-many recent documentaries, most notably "Capturing the Friedmans," "Fragile Trust" strategically withholds important details about its subjects and treats them as "surprises" timed to make festival audiences go, "Ooooh." I hate it when documentaries do this, especially when they are recreating events from years ago and whose details are a matter of public record. Documentaries that solve mysteries, as "The Thin Blue Line" did, are magnificent and thrilling. But when a documentary that uncovers nothing shockingly new creates mysteries through editing, it feels cheap.

The movie deserves "credit" for pulling off a tricky balancing act: without editorializing about Blair’s treachery at the Times, or his ghastly and self-serving rationalizations afterward, it lets us know that it finds him disturbing and pathetic simply by putting him onscreen and letting him talk. The editing catches him in contradictions and falsehoods, at one point following a clip of Blair telling an interviewer that he’s never going to lie again with a clip of Blair telling another interviewer that he would never say such a thing, as that would be a lie.

Is Blair a victim of addiction, mental illness, racism, and bureaucratic enabling? Or is he mainly a clever schemer who eventually got caught? All of the above. He’s also a living embodiment of that great head-scratcher sentence: "Everything I say is a lie." 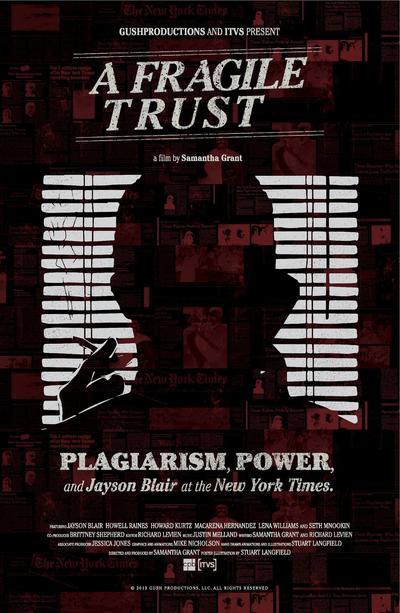 A Fragile Trust: Plagiarism, Power, and Jayson Blair at the New York Times (2014)