Rob Zombie’s world is one of screams that pierce like needles, their echoes trapped in your unconscious long after the movies have ended. Scars that refuse to heal; the fear of losing your mind after witnessing horror; knives going so deep into flesh that they deflate the safety of images. Zombie’s characters are crass and care free, agents of a chaotic and crooked morality obliterated by sudden violence. Zombie’s artistic journey has been unusual to say the least, from best-selling metal crowdpleaser to underground director beset by bad reviews and poor box office. His newest is "3 from Hell," a sequel to both his 2003 debut "House of 1,000 Corpses" and 2005’s "The Devil’s Rejects," about a family of country fried killers who revel in eldritch torment and feed on their victim’s innocence. This time they’re on a tear through the prison system and later a Mexican village.

It’s an inauspicious return to the storyline that made his name as a filmmaker. Jason Blum funded his 2012 film "Lords of Salem" on a lark while writing checks to a dozen other horror auteurs after the sudden success of "Paranormal Activity," then Zombie had to crowdfund his carney horror "31," and now three years later here’s "3 from Hell," shown as a Fathom Event like a religious service or an opera performance that seems to have been shot whenever his cast of character actors had a spare minute. The great Austin Stoker has a cameo as a newsreader in the very beginning, Danny Trejo appears for a matter of seconds and the legendary Sid Haig, currently fighting for his life in an ICU after an accident, only has about ten minutes of screen time. It’s the first Rob Zombie movie that feels as subversive in its logistics as in its violence since "House of 1,000 Corpses." The world doesn’t seem to want Zombie to make his art, at least not with his full range of resources, but there’s no keeping him down. Every hobbling he receives from the world of film financing and distribution he makes into a kind of slick strength.

When last we saw "The Devil’s Rejects," the trio of sadists who tore through his first two films, they were being gunned down by sheriff’s deputies in a convertible while “Free Bird“ wailed on the soundtrack. In order to make the latest chapter in their saga, Zombie has to literally resurrect them. Captain Spaulding (Haig) succumbs to health troubles a few years into his life sentence, but not before delivering one of Zombie’s best monologues. Otis (Bill Moseley) has his sights set on escape and has enlisted his cousin Winslow Foxworth Coltrane (Richard Brake, our Timothy Carey) in his attempt. Baby (Sheri Moon Zombie) is shaking up her wing of the prison in high style. A butch guard (Dee Wallace) has made it her mission to break Baby no matter the means. The warden of the prison housing the rejects (Jeff Daniel Phillips, just loving life as a weasel) starts sweating after Otis’ break out because he knows he’ll be coming back for Baby and it’s only a matter of how. When he returns home from work one evening and finds his wife held captive by Otis and Foxy, he knows he’s about to fall hard. He’s gonna to have to release Baby if he wants to get out with his life, and then it’s just a matter of how three murderous fugitives from justice lay low with the world on the lookout for them.

"3 from Hell" is a few different movies in one, starting as a lovingly crafted '70s cable news cycle as Zombie catches the audience up on things so far. Then it becomes a Susan Hayward prison movie with Baby squaring off against the warden, allowing Dee Wallace to play a rare villain with visible relish. Baby breaks her nose and she spends the rest of her screen time with Jack Nicholson’s facial bandage from "Chinatown," staring with deranged focus from behind the gauze. The hostage situation seems to deliberately ape Robert Endelson’s "Fight For Your Life," one of the more obscure video nasties. Brake and Moseley get to settle into their characters holding the Warden’s family and friends hostage. Once the trio hits the road, the film becomes Zombie’s riff on Sam Peckinpah’s "The Wild Bunch" and its first cover version Walter Hill’s "Extreme Prejudice." Each of these sections only suffers by dint of being too short, almost like Zombie’s crafted a stylistic omnibus and filled in the why’s later. It’s intoxicating seeing him trying out so many moods and modes, powered purely by the sadistic glee his cast brings to their roles.

Zombie movies are like a nature preserve for character actors, like a Quinn Martin or Irwin Allen production. The leads are terrific, as expected, but everybody rounding the smaller parts bring their all. Wallace, Haig, Phillips, Stoker are all wonderful, as are Emilio Rivera, Pancho Moler, Kevin Jackson and Richard Edson. The impression one gets watching Zombie’s movies is of a family reunion, with actors like Moseley, Brake and Phillips returning frequently knowing they’ll be given meaty roles in which to sink their teeth. "3 from Hell" is all depravity all the time and the cast know exactly how much pathos to bring to their roles as the worst people in the world.

Zombie usually makes no bones about the way we’re meant to feel about his violence, but here his worst psychopaths are the heroes. Things have changed since "31," in which powdered aristocratic madmen made 9-to-5ers fight to the death. Nowadays, it’s understandable why Zombie’s found his old band of sociopaths to feel like family. Yes the '3 from Hell' are bad, but everybody else is so much worse. Everywhere that Otis and company look there are greedy wardens, cruel prison guards, opportunistic scumbags, hair trigger hillbillies, horny maniacs, and the kind of people who make vendettas into personalities. Otis, Baby and Foxy start to look downright noble with their all-impulse thrill seeking. They make a certain amount of sense now, where before they looked like monsters. When the world is full of people who’d happily jail you to appeal to an adoring public, how do you not want to lash out with no fear of reprisal? The cavity where once a functional moral compass sat can, it turns out, be an agreeable place to spend 100 minutes.

Which gets at the heart of the unexpected successes of "3 from Hell." Zombie has flirted with what is sometimes referred to as a hang-out movie, from the footage of his carnies agreeably passing the first ten minutes of "31," to Laurie Strode and her friends and family hanging out in the margins of Zombie’s Halloween movies. "3 from Hell" is Zombie’s version of a Howard Hawks film, in which it’s a pleasure to spend time with his bloodthirsty creations. There’s a montage of the three partying in a cantina that uses visual theory he honed making his videos and concert movie "The Zombie Horror Picture Show."

Zombie’s aged into needing to provoke less than he just wants to live forever in blind drunk textural fetishism. "3 from Hell" has moments of abject horror, but fans of Zombie’s autumnal provocations will be rewarded with his most earnest and laid back nightmare yet. The wounds are still deep, the screams still linger, but for the first time, it’s an uncomplicated pleasure to live in his jagged compositions, basking in the chummy rapport of monsters. It’s taken almost two decades but Zombie’s hell-on-earth is finally preferable to the world in which we live. 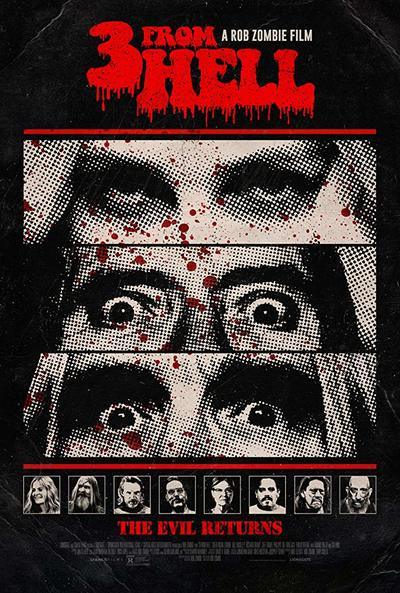 Bill Moseley as Otis B. Driftwood

Tracey A. Leigh as Judy Harper