“Understated” isn’t a word you’d ordinarily use to describe a Jerry Bruckheimer production, but that’s surprisingly what “12 Strong” ends up being.

That’s not to say it’s completely restrained, by any means. In telling a tale of real-life heroism against staggering odds, this is a rousing war picture, meant to stir equal amounts of excitement and patriotism. Set soon after the attacks of Sept. 11, 2001, “12 Strong” is packed with protracted battle sequences, full of deafening bombings and seemingly endless amounts of gunfire. The cumulative effect is draining; you’ll walk out of the theater with the feeling that you, too, have gone to war – and an appreciation for those who are brave enough to do so themselves.

But Danish commercial director Nicolai Fuglsig, making his feature filmmaking debut, draws on his previous experience as a photojournalist to bring a sense of gritty realism to the action rather than sweeping sentimentality. The vibrant sound design also plays a crucial role in immersing us, as does a score that increasingly cranks up the tension.

It’s all solid from a technical perspective. Where the film could have used more power is in its narrative momentum. Based on the screenplay from Ted Tally (“The Silence of the Lambs”) and Peter Craig (“The Town”)—itself inspired by Doug Stanton’s book “Horse Soldiers: The Extraordinary Story of a Band of U.S. Soldiers Who Rode to Victory in Afghanistan”—“12 Strong” eventually feels overlong and repetitive. And the impressive line-up of actors comprising the ensemble cast can only do so much with their thinly drawn characters.

Chris Hemsworth leads them all as Capt. Mitch Nelson, the head of a dozen Green Berets who were the first American troops to set foot in Afghanistan after 9/11. Among his men are the older and more experienced chief warrant officer, Hal Spencer (Michael Shannon); wisecracking Sam Diller (Michael Pena); and weapons expert Ben Milo (“Moonlight” star Trevante Rhodes). Their orders come from the no-nonsense Col. Mulholland (William Fichtner) and the thoroughly unamused Lt. Col. Bowers (comedian Rob Riggle, a Marine Corps veteran himself in a rare dramatic role).

Their mission is to enter northern Afghanistan through Uzbekistan with the help of the Uzbek warlord General Dostum (Navid Negahban), who has his own reasons for taking on the Taliban. Together with Dostum and his men, Nelson and his team must capture the Afghan city of Mazar-i-Sharif, a Taliban stronghold. But despite their extensive training and boundless bravery, the American troops don’t realize they’re going to have to navigate this unforgiving terrain—which notoriously has destroyed empires for centuries—on horseback. And they’ll have to do it before the winter freeze comes in three weeks.

It’s an amazing story but also an absurd sight: muscular soldiers strapped with high-tech gear and weaponry, galloping along on horses, facing down massive tanks and rocket launchers. Fuglsig depicts these showdowns in relentless, unflinching fashion. He’s methodical but he finds room for swagger, especially when it comes to Hemsworth’s character.

One of the more compelling dynamics here is the way everyone underestimates Nelson, which isn’t what you’d ordinarily expect in a character the hunky Hemsworth plays. Here, he’s too pretty, too young. He has too little field experience and constantly has to prove himself. And this is especially true within the ever-evolving relationship between Nelson and the mystically wise Dostum. Negahban is formidable but he brings a much-needed calm to the tense proceedings.

Naturally, Hemsworth is up to the physical demands of the role—he is Thor, after all—but he never gets enough credit for his acting chops, both dramatic and comedic. He also has a nice buddy chemistry with both Shannon and Pena. But except for a sweet subplot involving Rhodes’ character, the remainder of the team barely registers. They are ideas; they are cogs.

Similarly, “12 Strong” as a whole isn’t terribly interested in going any deeper into the larger ramifications of the United States’ prolonged involvement in Afghanistan. That’s not its purpose, though, and that’s not why you’re here. You’re here to feel good, if only for a little while, about some men who were great. 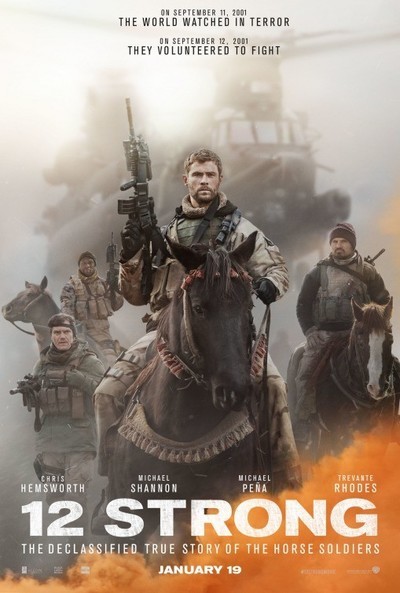 Rated R for war violence and language throughout.